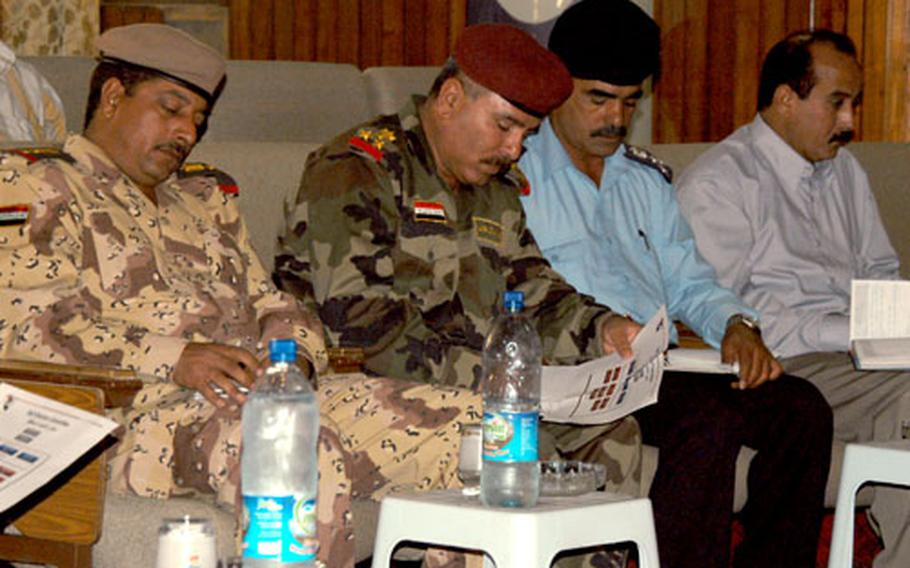 Leaders from the Iraqi army and police take notes Monday during a meeting to plan security measures for the fall national elections. The committee will begin meeting once every two weeks to discuss what went wrong with the Jan. 30 elections in Salah Ad Din, a Sunni province in central Iraq, and to plan ways to urge more people to vote this fall. (Teri Weaver / S&S) TIKRIT, Iraq &#8212; Six months ago, fewer than 400 people went to the polls for the national elections in Ad-Duluiyah, a farming town of 54,000 Sunni Muslims.

On Sunday, an estimated 22,000 people in Ad-Duluiyah turned out to elect 21 members from 74 candidates for their town council. So many people came to the polls, they ran out of ballots and had to get more printed in the middle of the day.

Iraqi soldiers and police officers provided security for the election. Local Iraqi judges watched over the 16 polling stations. No bombs exploded and no gunfire erupted.

The Iraqis asked only one thing of the U.S. forces who patrol Ad-Duluiyah and other towns in the Sunni-dominated province of Salah Ad Din: Stay as far away as possible.

The formula worked, just as it had a week earlier in Tikrit, the capital of Salah Ad Din. More local elections are planned in more Sunni towns throughout the province in the coming weeks. It&#8217;s a stark example that in some parts of Iraq, the political process is moving at the local level.

&#8220;I visited some of these polling stations,&#8221; Hamad Hamood Shekti, governor of Salah Ad Din, said about Tikrit&#8217;s election at the end of June. &#8220;Many people participated. We will have more elections, in Beiji, Samarra. We can say this election is promising for the next one.&#8221;

Holding these local elections hasn&#8217;t been easy, according to Ahmed Mohammad Sahih, a linguistics professor at the University of Tikrit and spokesman for the provincial government.

The province asked for help from the national government but received little guidance and no budget. Poll workers volunteered their time. Donations were collected to print ballots, he said.

Not every local election has been a success. In Balad, only 6,000 voters showed up recently out of a town of about 40,000 residents, U.S. officials said.

Still, Iraqi politicians, tribal leaders, and American officers here hope the turnout at these smaller elections signals a changing philosophy among the Sunni Muslims who stayed away from the polls on Jan. 30.

&#8220;It was a big mistake,&#8221; said Eissa Ibid Mahmoud, a Sunni and a brigadier general in the former regime. Eissa now directs the Provincial Joint Coordination Center, a planning office that acts as a central center for information and emergency services throughout Salah Ad Din.

In planning these smaller, local elections, the Americans haven&#8217;t been completely on the sidelines. On election days, quick-response teams were ready in case something happened. In the weeks before the elections, a small team of U.S. officers worked with the Iraqi leaders behind the scenes to help coordinate the vote.

That work is continuing for the upcoming national elections, including a constitutional referendum scheduled for October. Eissa and the province&#8217;s deputy governor met with leaders from the Iraqi army and police to begin planning security measures. The committee, which will begin to meet every two weeks, was U.S. Capt. Zach Szilagyi&#8217;s idea.

Szilagyi&#8217;s job in Iraq is to counsel Eissa and assist his decisions at the coordination center. On Saturday, the 26-year-old captain from LaPorte, Ind., urged Eissa to call together local leaders every other week to discuss the elections. Eissa agreed.

If representation in the national assembly in Iraq were based on population, Salah Ad Din would have 12 members, local leaders say. But the current system filled the 275 seats based on the most votes given to various parties, not by population. Salah Ad Din ended up with just one representative.

&#8220;It means nothing, because one person is not enough,&#8221; said Khilaf Mohammed, who sits on the provincial council for Salah Ad Din.

It&#8217;s a difficult situation for a province known for its ties to Saddam Hussein and his Baath party. Tikrit is the largest city near Saddam&#8217;s birthplace, and his compound of palaces there is now occupied by the 42nd Infantry Division, a New York National Guard unit.

About 1.2 million people live in the province. Nearly 10,000 people who were Baath party members &#8212; including military and police officers, lawyers, judges, doctors and professors &#8212; lost their jobs when the Americans invaded, said Ahmed, the linguistics professor. Fruit and grain farmers in the province who had relied heavily on government subsidies found themselves unable to afford electricity to pump water or fertilizer to grow crops.

Many Sunnis in the province are suspicious of leaders in Baghdad, believing some are influenced by outsiders from Iran. It&#8217;s this suspicion, along with their small representation in the assembly, that is spurring their interest in voting, said Ahmed.

TIKRIT, Iraq &#8212; A local police chief&#8217;s arrest here last month is one example of how isolated some in this Sunni town feel from the Shiite-dominated government in Baghdad.

Muzhir Tihi was a general under Saddam Hussein and, until recently, the police chief for Salah Ad Din, the province that includes Tikrit. Muzhir was charged recently by an Iraqi court in relation to mass graves found in the southern part of the country.

U.S. officials are reluctant to say much because, they say, it&#8217;s an Iraqi issue and should be settled by Iraqi courts.

Some in Salah Ad Din, however, are frustrated by that. Most didn&#8217;t participate in the national elections in January and it&#8217;s a decision they regret now because they feel their government isn&#8217;t listening.

Bahar Iayyad is a sheik who didn&#8217;t vote in January. But he did march Sunday in Tikrit to protest Muzhir&#8217;s arrest.

That doesn&#8217;t satisfy everyone. Muzhir&#8217;s brother met Monday afternoon with U.S. Army officers. The man pleaded with Maj. Chris DiCicco, who works with the provincial government to monitor their work and oversee construction projects.

DiCicco said he would pass along the concerns but urged the man to turn to his own elected leaders for help.