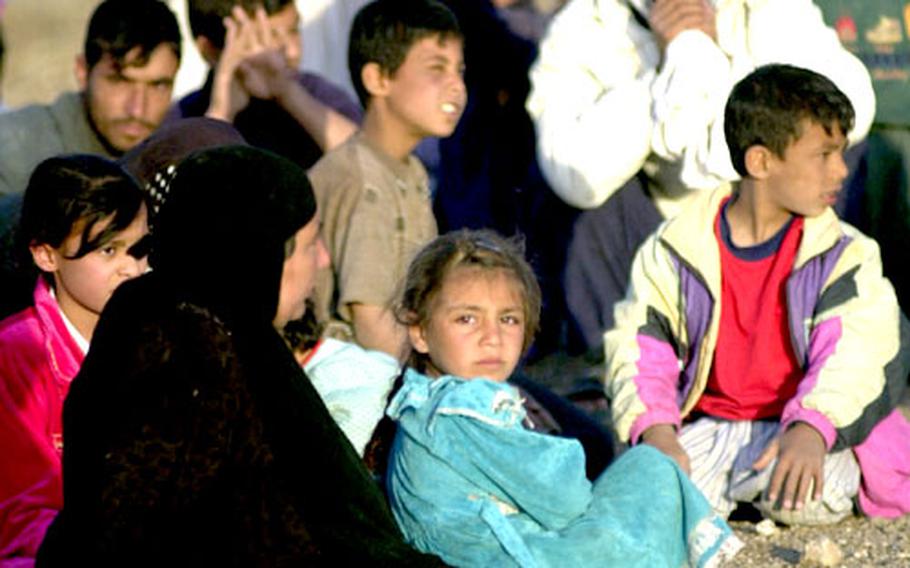 CENTRAL IRAQ &#8212; Prisoners of war, even in the smallest numbers, are putting a logistical strain on the 1st Battalion, 15th Infantry Regiment.

While the 3rd Infantry Division forces in southern and central Iraq have not encountered mass surrenders like those occurring in Basra, these U.S. troops recently captured 300 Iraqi soldiers near the Iraqi 11th Infantry headquarters near An Nasiriyah.

The bulk of those Iraqis simply walked up to the U.S. soldiers with hands held aloft, smiling and flashing American leaflets with surrender instructions that had been dropped earlier in the week. The leaflets promise food, water and the chance to live. Now the Americans must provide prisoners with all three.

&#8220;Our hope is that as many enemy surrender as possible. But once they do surrender, we have certain obligations to them,&#8221; said Lt. Col. John Charlton, commander of Task Force 1-15.

&#8220;We&#8217;ve made those promises in our leaflet drops and have certain obligations under the Geneva Conventions. We will honor those obligations.&#8221;

After the battle at An Nasiriyah, Iraqi prisoners were herded into holding pens surrounded by concertina wire. They were given food and water; some were questioned by U.S. military intelligence officials.

Among the prisoners was the Iraqi 11th Infantry commanding general, who told American interrogators that the entire division had surrendered.

&#8220;He&#8217;s being cooperative and is assuring us that his troops are done fighting,&#8221; said Capt. Dave Smith, an intelligence officer with 1st Battalion, 15th Infantry.

But sporadic fighting continued through the next night, and more prisoners were taken. As the U.S. task force continued its push toward Baghdad, some soldiers and equipment had to be left behind to deal with the prisoners.

Adding to the problems are the Iraqi civilians that the U.S. troops are encountering on the battlefield. The soldiers are under strict rules of engagement that limit who and what they can fire upon.

It is certainly not all-out war.

One advancing armor column stalled for 45 minutes as it tried to discern whether an Iraqi radio tower was a legitimate military target. In the end, it drove around the complex. And as the long column of Task Force 1-15 continues toward other military objectives in Iraq, it is slowed by each civilian vehicle it encounters.

Scouts must stop the vehicle, search it, determine its occupants&#8217; intentions and somehow communicate that the civilians should leave the area. Written placards in Arabic help with the task, but sometimes the overly friendly Iraqi civilians want to chat before moving on.