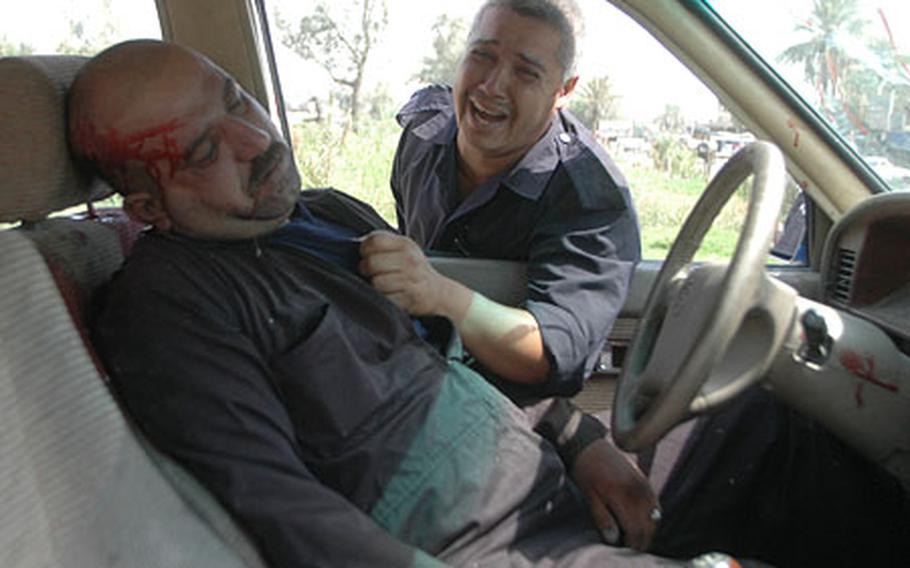 An unidentified colleague wails over the body of Iraqi policeman Rabee Ghazi, slumped in the driver&#39;s seat moments after he was killed by drive-by shooters. The colleague had been in the truck with Ghazi when the attack occurred in the Yarmouk area of central Baghdad. (Les Neuhaus)

An unidentified colleague wails over the body of Iraqi policeman Rabee Ghazi, slumped in the driver&#39;s seat moments after he was killed by drive-by shooters. The colleague had been in the truck with Ghazi when the attack occurred in the Yarmouk area of central Baghdad. (Les Neuhaus) 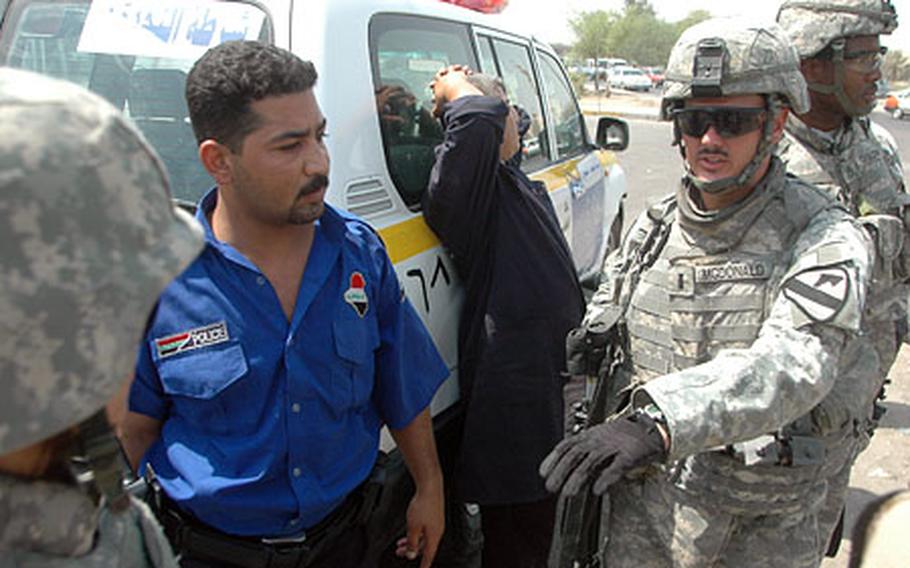 First Lt. Joe McDonald, 23, of Glenwood, Md., works through the details of what happened only minutes before when an Iraqi policeman was shot by unknown gunmen in the central Baghdad area of Yarmouk. McDonald is the 2nd Platoon leader of Battery A, 3rd Battalion, 82nd Field Artillery Regiment. (Les Neuhaus / S&S) 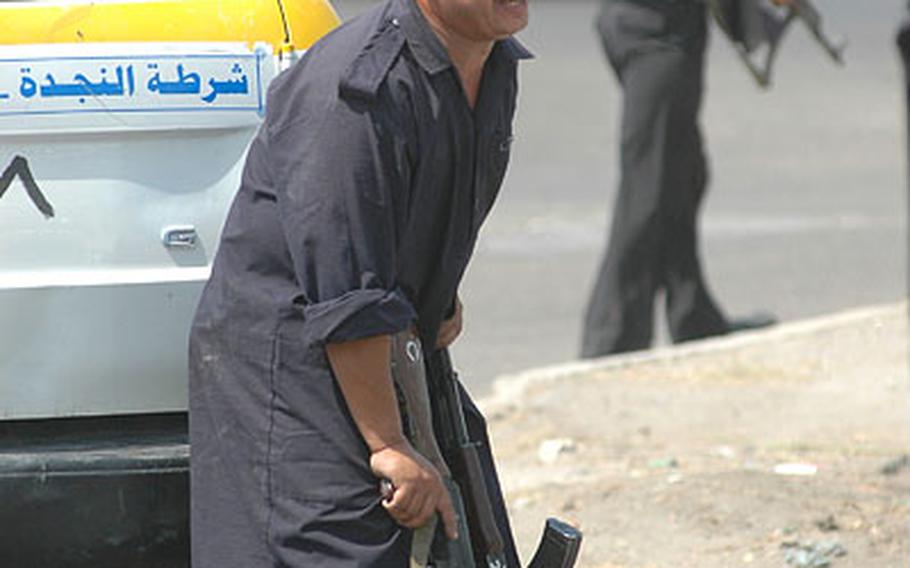 An unidentified Iraqi policeman cries after the killing of his colleague. (Les Neuhaus / S&S) 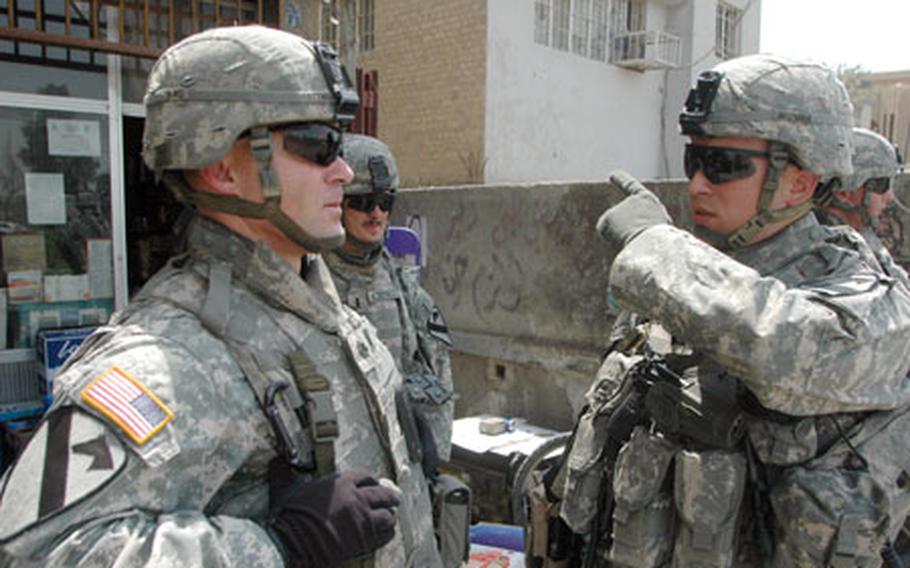 BAGHDAD &#8212; An Iraqi policeman was shot dead Tuesday by what military officials operating in central Baghdad described as drive-by shooters. U.S. soldiers were patrolling a street near the incident.

As troops were greeting officials at a school being renovated by their battalion in the Yarmouk area of Qadisiyah neighborhood, a largely affluent Sunni suburb bordering the Green Zone, gunfire erupted roughly 100 meters away.

The men took cover, thinking they were the target, and then jumped into their Humvees to support the Iraqi police who were just down a side street. They found a police pickup truck had struck a civilian vehicle after its driver, Rabee Ghazi, was killed by a bullet.

The policemen had been transporting fuel in the back of their vehicle, which held two large containers of gas, including a 55-gallon drum. Bullet holes had riddled the fuel containers, along with the windshield, and gas poured out onto the truck.

A suspect was detained near the scene a half hour later, but it was unknown whether that was related to the shooting.

The area has been the scene of two other attacks in the last month, according to Lt. Col. Mike Tarsa, a native of East Longmeadow, Mass.

Residents and shopkeepers ran for safety upon hearing the gunfire.

Ghazi was pronounced dead on arrival at nearby Yarmouk Hospital, according to police.

Tarsa, 42, paid a visit to the hospital, but on a separate matter. Troops from his battalion conducted a raid on the hospital early on Aug. 13 in a search for insurgents.

According to Tarsa, credible intelligence led them to the hospital to capture an insurgent who had been treated there following a gunfight with U.S. forces the previous day.

Though the raid netted the arrest of the man and two of his associates, it upset patients and hospital employees, said hospital administrator Haqqi Razzouki, who manages a staff of 1,600.

&#8220;This is the first tension we have had &#8230; and previous to this there were no problems with American forces,&#8221; he said from his offices in the hospital. &#8220;It has had a psychological effect on the people, and I think it is in the nature of the people to be upset when a search like this is carried out.&#8221;

Razzouki didn&#8217;t object to the military using force to take patients, but said his hospital was an institution that treated anyone, regardless of their beliefs.

&#8220;We are in a state of war, so every contact that our staff has with military personnel, whether they are Iraqi or American, is taken seriously,&#8221; Razzouki said. &#8220;But the people are very angry &#8230; because this is a place where people are treated regardless of whether they are Sunni or Shiite, or whether they are criminals or terrorists.&#8221;

Razzouki said some hospital staff were scared or even quit due to American forces taking their fingerprints, conducting iris scans, and asking for phone numbers.

Tarsa said an ambulance driver was identified by a woman as the main perpetrator of an attempted kidnapping. After two weeks of interrogation, it was confirmed he was guilty, Tarsa said.

Tarsa feared renovations and improvements to the hospital&#8217;s blood bank, funded by his battalion, and construction of a new burn-victim ward might be jeopardized by the tension and asked for the hospital administrator&#8217;s permission to carry on with the projects. Each project was expected to cost more than $200,000.

Razzouki gave his approval and said the relationship was still strong, but needed ongoing maintenance.