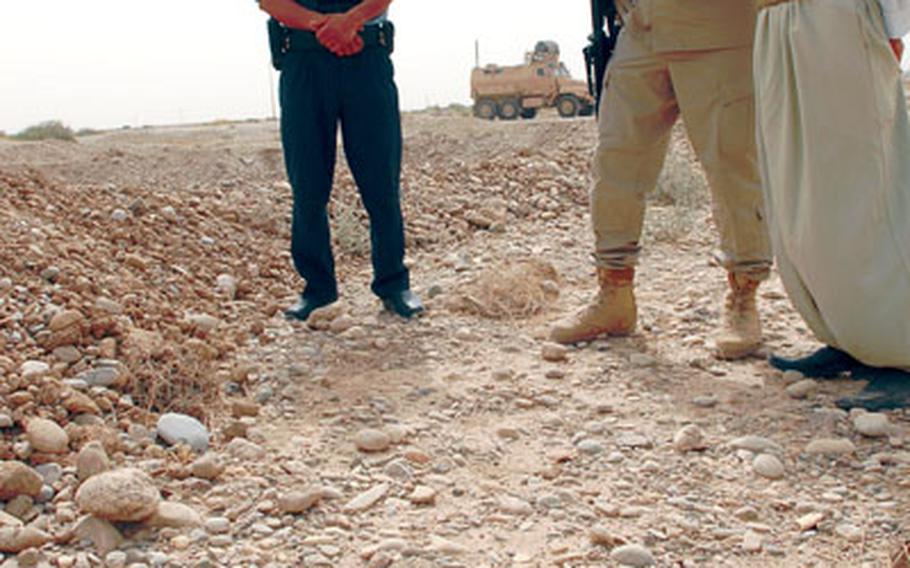 Jerry Pounds, center, a civilian Iraqi Police adviser with 23 years in law enforcement back in the states, looks at an artillery shell July 9 with the man who reported a cache of the explosives outside Kirkuk to Iraqi Police. The police are being urged to do more community policing. (James Warden / S&S)

KIRKUK, Iraq &#8212; The weapons cache, found by an Iraqi, was impressive. A bulldozer working outside Kirkuk unearthed a hole containing nearly 80 artillery shells thought to be from the Iran-Iraq War in the 1980s.

Yet even more impressive were the circumstances that led Iraqi police to the stash. A neighbor suggested that the landowner, who found the cache July 8, call police. He did, and Iraqi police were out the next day working with Americans to destroy the shells and keep them out of insurgents&#8217; hands.

The incident is an example of the role that Iraqi police can play as Kirkuk, like much of the country, appears to calm down. Americans are helping Iraqi police here make the transition from a paramilitary force to a community-minded organization focused on keeping up a dialogue with nearby residents, similar to law enforcement agencies in the States.

"Community policing" is now the byword for the team. The soldiers and civilian advisers encourage police to get out into local neighborhoods and build relationships that will make residents feel comfortable calling them when something is wrong.

"You want them to be the face of the government," Auten said.

Many departments haven&#8217;t always had that luxury. Capt. Aram Mohammad Samin, an officer outside Kirkuk, said his unit once raided insurgent homes three days a week.

Raids may look cool, but Maj. Robb Marshall, operations officer for the police training team, said they actually make the population more wary of police because then residents only see the police when something bad is happening.

The trainers focus most on human rights and ethics, said Jerry Pounds, a civilian Iraqi Police adviser with 23 years of experience in U.S. law enforcement. They emphasize that police work for the people. Pounds said he often verbally walks the police through various situations to help them consider how they&#8217;ll respond.

Along with that comes training in basic, critical police skills. When Americans taught one group of police how to properly handcuff a suspect, their commander cited a grim incident. The police hadn&#8217;t handcuffed a suspect correctly, and they hadn&#8217;t found a gun hidden on the man. The suspect was then able to shoot and kill one of the officers while riding in the back of the police vehicle.

The teaching has its challenges. Pounds said he wishes the police would get out of their vehicles and walk around the community more &#8212; a frequent criticism of stateside police officers, too.

"What we need to do one of these days is get in the vehicle with them," he said.

Fuel shortages already limit the amount they can use those vehicles, though. Each truck receives just 20 liters, or about five gallons, per day, and some of the trucks get less than 20 miles per gallon. That can make it hard for police in rural areas to get out to far-flung communities. Some police end up paying for gas out of their own pockets.

Still, the team members say they&#8217;ve seen solid progress. After a double murder, the advisers brought out a metal detector to help the Iraqis process the crime scene. They showed the police how to use the detector and then stepped back and let them take over. The Iraqis were ecstatic when they found a missing bullet on their own.

"All we did was provide technical assistance," Pounds recalled.

Samin has even made business cards on his computer with his phone number that he hands out to people he meets on the street.

"We are always in touch with the civilians and the public," Samin said. "If they face any problem, they are going to call me."

That&#8217;s exactly what happened with the large weapons cache, which gives Pounds hope that his lessons are having an impact.

"This is the way we want it to work," Pounds said. "A man found this problem. He called the IP, and they came out."