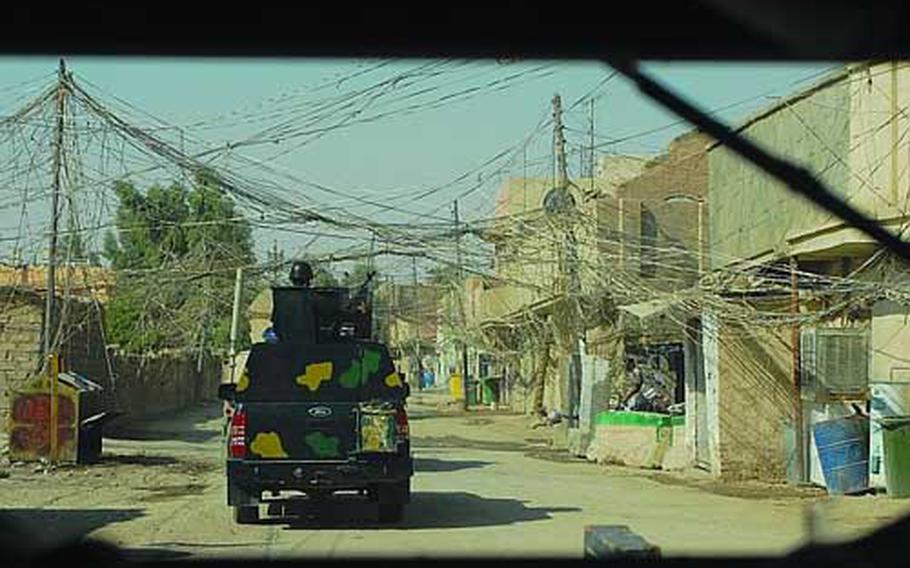 The June 30 withdrawal of U.S. forces from Iraqi cities means the Iraqi police are taking increasing responsibility for combating terrorism in their own country. However, in provinces south of Baghdad, where there is relatively little insurgent activity, U.S. forces, including civilian police trainers, are teaching local officers the skills to deal with the sort of crimes tackled by police in most other countries.

Jon Paul "JP" Tolan, 41, of Mobile, Ala., a master police trainer working for the State Department in Karbala, said on Monday that he just finished teaching a two-week "basic crime scene" course to 20 Iraqi police officers. The course covered the sort of things police should know about investigating criminal offenses such as violent crime, rape and murder, he said.

"They learned how to secure the crime scene, how to collect evidence, how to process evidence and how to set it up so it will go through the justice system and have a successful case," he said.

Conventional crime is at low levels in Iraq compared to the U.S., but, as the country opens up to the world, problems such as drug abuse are starting to become a problem.

"Ten years ago, the Iraqis tell me, they didn&#8217;t see or hear of drugs on the street, but they are seeing and hearing about it now. It&#8217;s the same with people abusing alcohol," Tolan said.

At checkpoints police often find hashish, brought into the country from Turkey, Afghanistan, Iran, Yemen and Saudi Arabia, he said.

"Most of it comes from over the border. We are trying to stop these drugs from coming inside," Jaleel said.

Another emerging problem is alcohol abuse &#8212; something outlawed by Islamic law, although Iraqi Christians are allowed to drink and even operate liquor stores in some cities.

In Karbala, one of Shiite Islam&#8217;s most holy cities, cars are searched for alcohol. Christians are allowed to possess alcohol for personal use, but if a large quantity is found, it is destroyed and the owner detained, Jaleel said.

In 2008, there were eight murders that were not related to the insurgency in Karbala, a city of just under a million people, Jaleel said.

Last month, Karbala police used the forensic techniques the Americans are teaching them to solve a whodunit killing described in the local press as "the murder of the symbols."

Col. Kareem Aboud Shitnan, Karbala police operations officer, didn&#8217;t know what symbols the Iraqi newspapers were talking about, but said the victim was found at his place of work, an electronics shop, with stab wounds.

Police found evidence of a struggle and called a local hospital to see if anybody had come in for treatment the night before. Sure enough, someone had, and when they went to the man&#8217;s home they found blood in the sink that matched the victim&#8217;s, Shitnan said.

One reason why Iraqi police deal with fewer crimes than their U.S. counterparts is because Iraqi tribes settle many criminal matters, said Nadum Saad Ali, 25, a police investigator at Karbala.

Iraqi law allows for "government rights" and "tribal rights," which operate on the principle of an eye for an eye, he said.

However, in a slaying, even if a tribe is paid off, the government always gets involved, Ali said.