Hani Halal readies his weapon before leading a group of Iraqi special forces policemen into a training building at Forward Operating Base McHenry, Iraq, on Tuesday. (Ben Murray / S&S)

Hani Halal readies his weapon before leading a group of Iraqi special forces policemen into a training building at Forward Operating Base McHenry, Iraq, on Tuesday. (Ben Murray / S&S) Iraqi police officer Hani Halal looks down the barrel of his rifle Tuesday at the training ground for the special tactics unit at FOB McHenry. American police officers are molding eight Iraqis into a SWAT-like force. (Ben Murray / S&S) 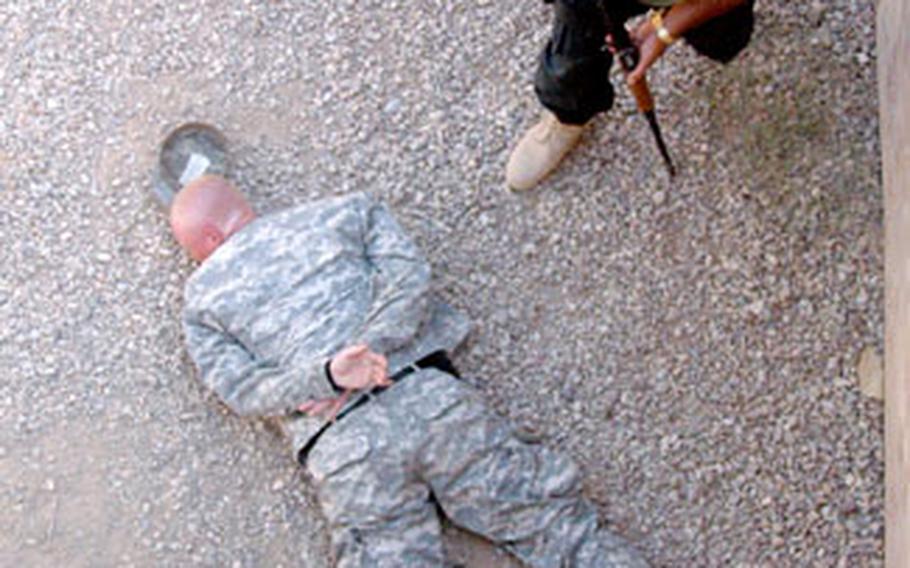 A U.S. soldier from the 300th Military Police company, Field Artillery Forward Security Forces, plays the part of a “takfiri,” or insurgent, as he lies prone in a training building at Forward Operating Base McHenry on Tuesday. (Ben Murray / S&S)

FORWARD OPERATING BASE McHENRY, Iraq &#8212; At a rickety plywood structure in a corner of this isolated base southwest of Kirkuk, Iraqi policemen stand in a tight line, guns ready. On signal, one man shoulders open a plywood door and the rest rush inside, shouting &#8220;Get down! Get down!&#8221; in Arabic, clearing rooms and subduing suspects as they move along.

Their goal is essentially to create Iraqi versions of stateside SWAT teams, said Jim Barnett, a policeman from Clyde, Ohio, and one of the officers at FOB McHenry. It&#8217;s a program used around Iraq to improve security forces, an asset sorely needed in Hawijah, a small city undergoing an upsurge in violence.

Feros Jabar Saleh, head of the eight-man Iraqi team, said they have been drilling on the basics of house raids, room clearance and driving their newest assets donated by coalition forces: black Humvee trucks.