Iraqi police get new equipment, but success will come from the heart 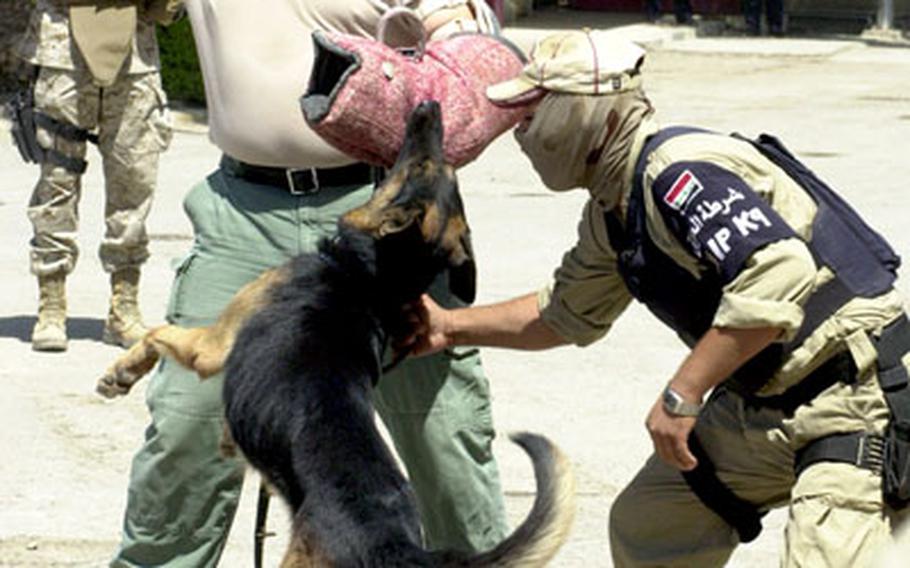 Dog handler Chester Gilbert wears a protective "bite sleeve" as he plays the bad guy during a demonstration of Iraqi police prowess Tuesday in Baghdad. The Iraqi policeman used the dog to find explosives, then to attack Gilbert as he tried to resist "arrest." (Terry Boyd / S&S)

Dog handler Chester Gilbert wears a protective "bite sleeve" as he plays the bad guy during a demonstration of Iraqi police prowess Tuesday in Baghdad. The Iraqi policeman used the dog to find explosives, then to attack Gilbert as he tried to resist "arrest." (Terry Boyd / S&S) 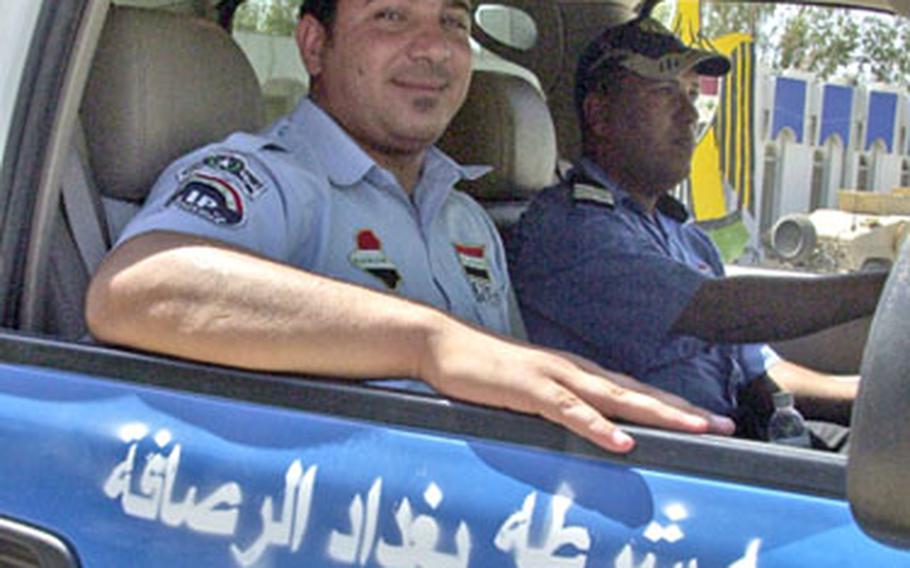 An Iraqi policeman beams from the passenger seat of a new Chevy armored police pickup. American trainers say such vehicles — a huge improvement over what the police were driving before — help build police morale and pride. But they also need basics, such as ammunition, which is difficult to procure from the Iraqi government. (Terry Boyd / S&S)

BAGHDAD &#8212; Iraqi police showed off a dazzlingly array of new equipment and capabilities on Tuesday, courtesy of the U.S. and its coalition partners.

But many of the American military officials and civilians working to shape the force say heart, not gadgets, make policemen. Heart, and time to undo 30 years of decay.

During a media event at FOB Shield in the Rusafa district of east Baghdad, Iraqi police staged demonstrations of everything from using dogs to detect explosives and subdue suspects to using high-tech gear such as a criminal computer database, and robots to detect and defuse roadside bombs.

At the end of the event, Lt. Col. Alfred Bazzinotti, commander of the Fort Polk, La.-based 519th Military Police Battalion, presented a police commander the key to one of 28 new Chevy up-armored police vehicles. In a brief interview, Bazzinotti called Iraqi police patriotic believers in rule of law: &#8220;The result of three long, hard years of contact with [military police].&#8221;

But there is still a lot of work to be done.

&#8220;I worked in Samarra, and all the good ones got assassinated,&#8221; said another civilian trainer.

While the Iraqis warmly accepted the new equipment and capabilities on display, the force still needs basics such as sufficient ammunition from the Iraqi Ministry of Interior officials, American military and civilian officials said.

In Rusafa, the headquarters for all of Baghdad east of the Tigris River, the best police are brave and dedicated, Bost said.

&#8220;Most risk their lives to come to work, but they show up every day,&#8221; he said. Some start on foot, then take taxis and minibuses to make sure they&#8217;re not followed. Last fall, insurgents wearing explosives vests killed 60 police inside the Baghdad Police College where the new recruits are housed and trained. Yet hundreds still apply at each recruitment session.

Using an American timeline or standards to measure Iraqi progress is unrealistic and unfair, Bost and others said. It will take, Bost said, &#8220;generations&#8221; to reach western law enforcement standards.

Bost and fellow liaison Jeff Bunce say there is no better example of valor and heart than police Gen. Hussein. In June, insurgents blew up his vehicle, killing Hussein&#8217;s driver. Attackers then opened fire with small arms, shooting Hussein twice.