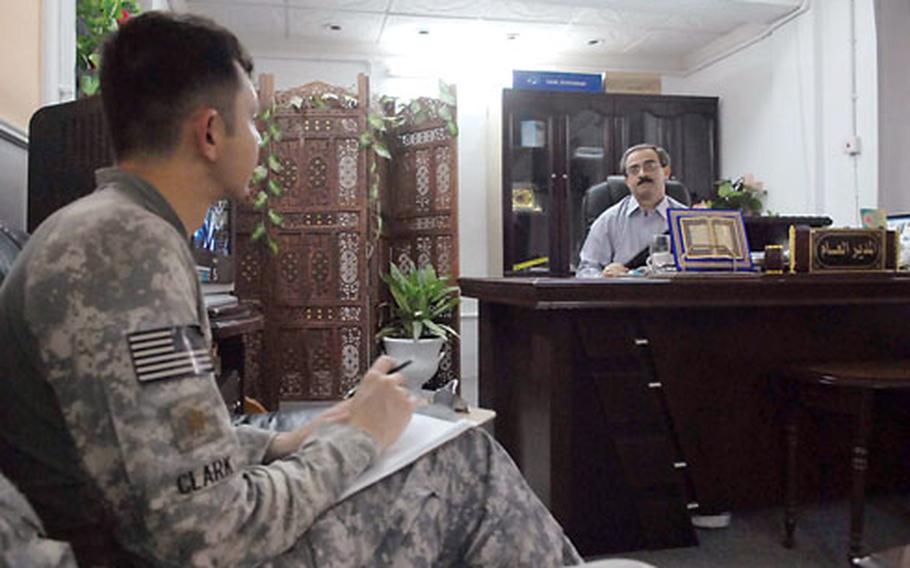 Maj. Tom Clark, head of the 1st Brigade Combat Team, 4th Infantry Division’s infrastructure coordination team, talks about Baghdad projects with Salah Mehdi Mohammad, director general of the Rashid Beladiya. U.S. advisers have been working with local leaders like this public works manager to prepare them for the day when the Iraqis must stand on their own. (Photo by James Warden/S&S)

BAGHDAD &#8212; It&#8217;s the regular meeting of the essential services committee in Baghdad&#8217;s Rashid district, and the topic today is trash.

The men, officials in various local governments, want to clean the streets, but they don&#8217;t have the money for the equipment. So they do what Iraqi leaders have done for most of the past five years: They turn to the Americans.

"Our budget is just limited, not enough for this campaign," one member said. "If it is the Iraqi government (that must help), it is going to take a long time."

The American advisers tell them that&#8217;s not going to happen and then return to quietly observing the meeting from the background &#8212; content to let the Iraqis solve the problem on their own.

Massive infrastructure projects, business incentives and military training have attracted much of the attention directed toward Iraq&#8217;s reconstruction. But with the clock ticking down on America&#8217;s time in Iraq, advisers are laboring to ensure ground-level politicians and technocrats are ready to run the country on their own.

"We work together like brothers," said Hadi Helael Rashid, chairman of the essential services committee. "They teach us the right way to develop our country."

Local governments existed during Saddam Hussein&#8217;s era but they largely served to make the top-down distribution of services easier. Laws in 1969 and 1995 took away the ability of many local governments to decide how to spend money.

"It was centralized," said Salah Mehdi Mohammad, the director general of the Rashid Beladiya, or public works department. "You couldn&#8217;t do something even that you should. One guy had power."

That started to change in 2003 after the now-defunct Coalition Provisional Authority enacted measures that eventually led Iraq toward a federal model of government instead of the centralized government that it had for so long.

Local leaders quickly acquired responsibilities for which they were never prepared.

Across Iraq, soldiers talk about members of local councils flailing about simply because they didn&#8217;t understand their new roles.

Just as problematic, the governmental bodies were often hamstrung by the government&#8217;s own structure. Neighborhood and district councils are made up of representatives elected by the people, but they have almost no money of their own.

"Because we have no money, we cannot do anything," said Sabah Mishal, the assistant director general for the Dora Beladiya. "That&#8217;s why we ask the American forces for projects."

This allows more people to have a voice than before, but it also makes the approval process less

streamlined. Mohammad said he used to be able to depend on just one person but now has to work with several other people, too.

Rashid&#8217;s essential services committee showed this clearly. About half a dozen beladiya representatives met with a similar number of district council members.

It&#8217;s up to the American advisers to guide the Iraqis through this new terrain. Embedded Provincial Reconstruction Team members offer Iraqis tips on how to see a project through in a democratic government &#8212; basic stuff such as having a concrete proposal with a budget, providing an information sheet and bringing along a camera crew.

"We&#8217;re helping the Iraqi system work," said Thomas Lynch, team leader for the 1stBrigade Combat Team, 4th Infantry Division&#8217;s EPRT. "Putting ourselves out of a job is at the top of our objectives."

But doing this often requires the Americans to sit back and let the Iraqis figure out a solution on their own, as they did in the essential services meeting. Time and again, American soldiers tell Iraqi officials they must work projects through their government. While this can be slower for an individual project, Iraq would see little real progress if the Americans solved every problem on their own.

Iraqi leaders are still learning, but the Americans say they&#8217;re making great strides. When it comes to developing local leaders, the two are in agreement about what Iraq needs to continue its progress.

"There&#8217;s one way (to keep Iraq running smoothly): To put the right guy in the right location, the one with the most experience," Mishal said.