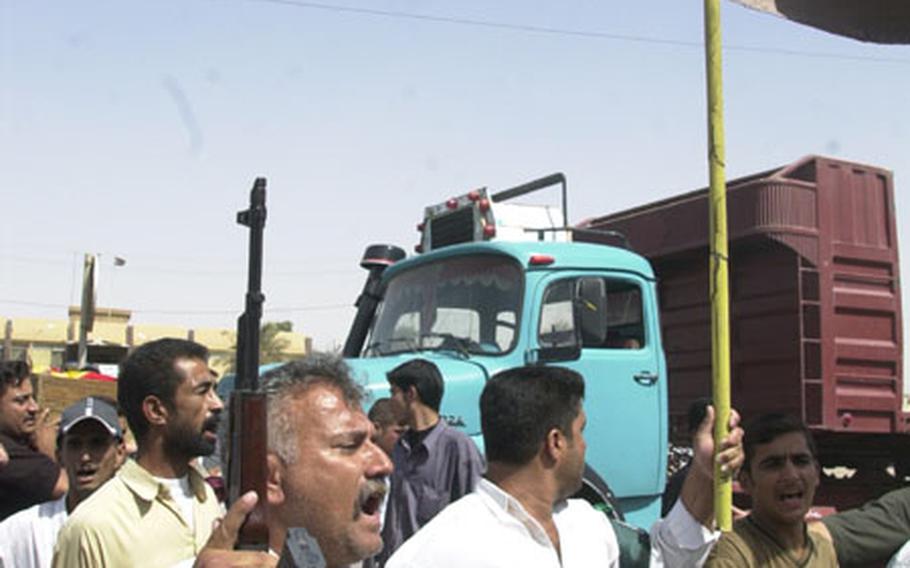 Angry Fallujah residents take to the streets for the funeral procession of the first of eight Iraqi Police officers killed Friday in an accidental shootout with American soldiers. Other than salutory gunfire and chants of "America is the enemy of Islam," the funeral procession was peaceful. (Terry Boyd / S&S)

Angry Fallujah residents take to the streets for the funeral procession of the first of eight Iraqi Police officers killed Friday in an accidental shootout with American soldiers. Other than salutory gunfire and chants of "America is the enemy of Islam," the funeral procession was peaceful. (Terry Boyd / S&S) 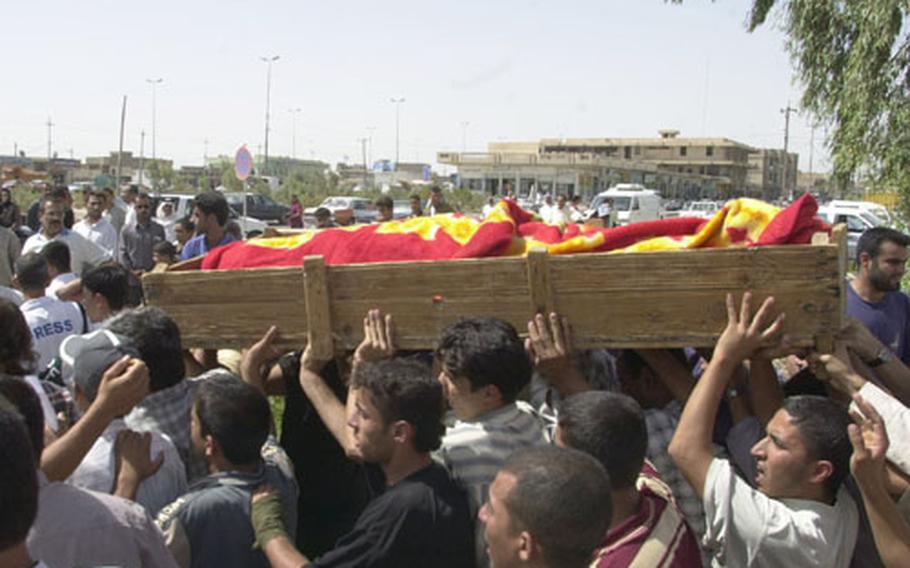 Angry residents of Fallujah, Iraq, surround the casket Saturday of the first of eight Iraqi Police officers to be buried after an accidental shootout with American soldiers on Friday. (Terry Boyd / S&S)

FALLUJAH, Iraq &#8212; A fatal shootout Friday might have been avoided if Iraqi security forces could have communicated with American soldiers.

The Iraqi policeman who is the liaison between local Iraqi police and U.S. soldiers was not present early Friday morning, said Iraqi police Maj. Adnan al-Jumaily in an interview Saturday at Fallujah City Hall.

So when Iraqi police and Iraqi Protection Force officers inadvertently got into a firefight with soldiers from the 82nd Airborne Division, the Iraqis had no way to radio the Americans to tell them they were killing friends, not foes, al-Jumaily said.

At least eight Iraqis &#8212; two policemen and six members of the Fallujah Protection Force &#8212; and one Jordanian security guard at Jordanian Hospital died in the shootout with troops from the 82nd&#8217;s 1st Battalion, 505th Parachute Infantry Regiment. One American soldier was wounded.

The shootout happened after heavily armed Iraqi police and Protection Force members chased a car driven by men who, al-Jumaily said, had just shot at a government aid building. Police also suspected men in the car of attacking American police a week prior to the shootout, he added. The Iraqi forces &#8212; sanctioned and trained by the United States &#8212; believe they chased the suspects into an American ambush in front of Jordanian Hospital, al-Jumaily said.

The Americans started firing on both the police and the suspects, he said.

Jordanian guards at the hospital may also have fired at the Americans.

Two complications prevented police from redirecting the U.S. fire so they could withdraw. First, police and soldiers communicate through translators, none of whom was present.

Without the liaison present at the firefight, the police and protection force personnel had no way to appeal to the soldiers to stop firing, he said.

On the American side, details are still sketchy and the incident is under investigation, said 1st Lt. Ryan Huston, protocol and civil affairs officer for the 1st Battalion.

&#8220;What we know is, a truck with a heavy machine gun fired on a platoon of 82nd Airborne soldiers, and we fired back in defense of our troops,&#8221; Huston said. He added that it&#8217;s not clear why protection corps personnel were involved because they have no authority to be in the area, more than a mile east of the city proper.

The United States may look at ways to improve communications with local police, including radios and better markings on authorized police vehicles, Huston said.

On Saturday, U.S. officials issued a statement stating, &#8220;We deeply regret this incident and extend our sincerest condolences to the families of the deceased.&#8221;

It&#8217;s not clear what effect the killings will have on long-term relations between residents in the area &#8212; a stronghold of support for former Iraqi leader Saddam Hussein &#8212; and U.S. soldiers.

During the Saturday funeral of the first policeman to be buried, local sheiks, or tribal leaders, and other influential people in Fallujah handed out fliers calling for a one-day general strike and a three-day period of mourning, both to begin Sunday.

Though the Iraqi police and the protection force both are trained by U.S. troops, they have more autonomy than police in Baghdad, for example.

Because they are perceived as independent, local support runs high, al-Jumaily said.

&#8220;We believe the IPs [Iraqi police] are here only to keep peace and stability,&#8221; said one sheik at the funeral. &#8220;So we support the IPs and the local government to keep the peace in town. But the soldiers are not welcome in Fallujah.&#8221;

Most residents were far less diplomatic, and hundreds of men accompanying the policeman&#8217;s casket for the noon ceremony chanted, &#8220;America is the enemy of God&#8221; while carrying flags from Saddam&#8217;s fallen regime.

&#8220;The Americans said they were going to free the Iraqi people,&#8221; said Sami Ahmed Kalaf, who added that he opposed Saddam. &#8220;But, had we known they were going to occupy us, I swear to God, even the little children would have fought them.&#8221;