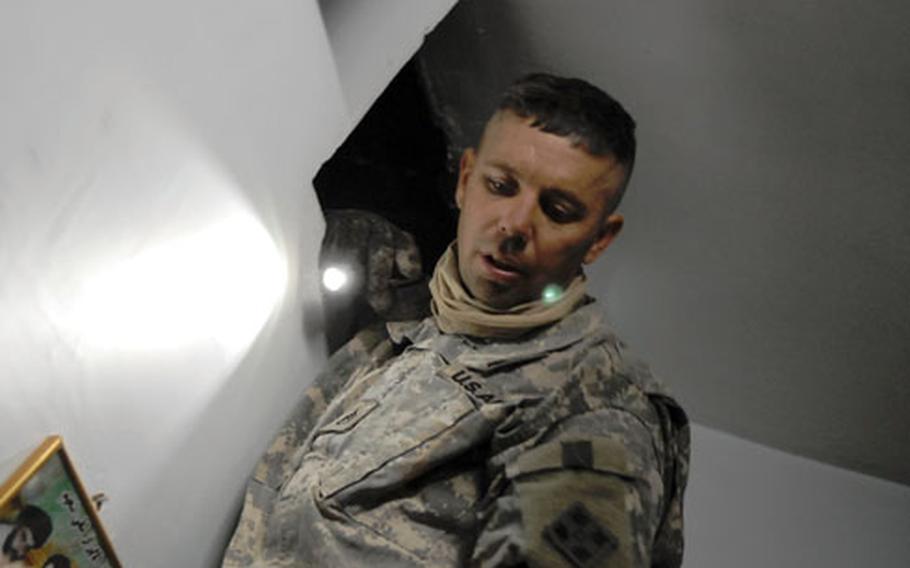 Staff Sgt. John Hardin searches a crawl space of a home in Baghdad during a Sunday raid that netted an assassination ring suspect. (Photo by Heath Druzin/S&S)

BAGHDAD &#8212; U.S. soldiers Sunday arrested an Iraqi police officer suspected of being part of an assassination ring targeting local leaders in the southern part of the capital.

A metallic crash broke the drizzly pre-dawn quiet as a soldiers with the 1st Brigade Combat Team, 4th Infantry Division kicked in the front door of a modest home in the Abu T&#8217;Shir neighborhood, eventually detaining a man wearing a long-sleeved Iraqi police shirt who appeared to be in his 20s.

The man, whose name has not been released, is suspected of training insurgents with Jaish al-Mahdi, a Shiite insurgent group, on how to use sniper rifles in hopes of assassinating local council members, said Staff Sgt. John Hardin, who helped coordinate the raid. The suspect appeared resigned, laughing during his interview.

Though U.S. forces are increasingly shifting focus from battle to rebuilding, security remains fragile in much of Iraq, as highlighted by a series of deadly bombings and shootings in recent weeks. Iraqi security forces in particular have been targeted lately. Graffiti around town says Jaish al-Mahdi is coming back and U.S. forces are scrambling to head off a possible resurgence in violence.

Police units are still full of militants, though the situation is much better than a year ago, when officers often were little more than sectarian death squads, Hardin said. Hardin said continued problems with the Iraqi security forces undermine the legitimacy of the government.

Evidence against the suspect was carefully collected, including a photo of him wearing a mask and brandishing an assault rifle. Under a security pact with the U.S. that was approved Thursday by Iraqi lawmakers &#8212; and still faces a referendum on July 30 &#8212; U.S. soldiers would be required to seek warrants from Iraqi courts to execute arrests,.

Also under the agreement, soldiers would no longer be able to hold detainees without charge and will instead have to present evidence to keep them locked up.

The U.S. military is building criminal cases against about 5,000 detainees deemed to be dangerous &#8212; including suspected members of al-Qaida in Iraq &#8212; because of the pact, according to The Associated Press.

While questioning the police officer, Hardin asked him about another suspected cell member. The officer claimed ignorance.

"Tell him answer it or he&#8217;s going to Bucca," told a translator, referring to Camp Bucca, where the U.S. holds Iraqi detainees.

The officer just smiled and Hardin led him out the door to a waiting Humvee.