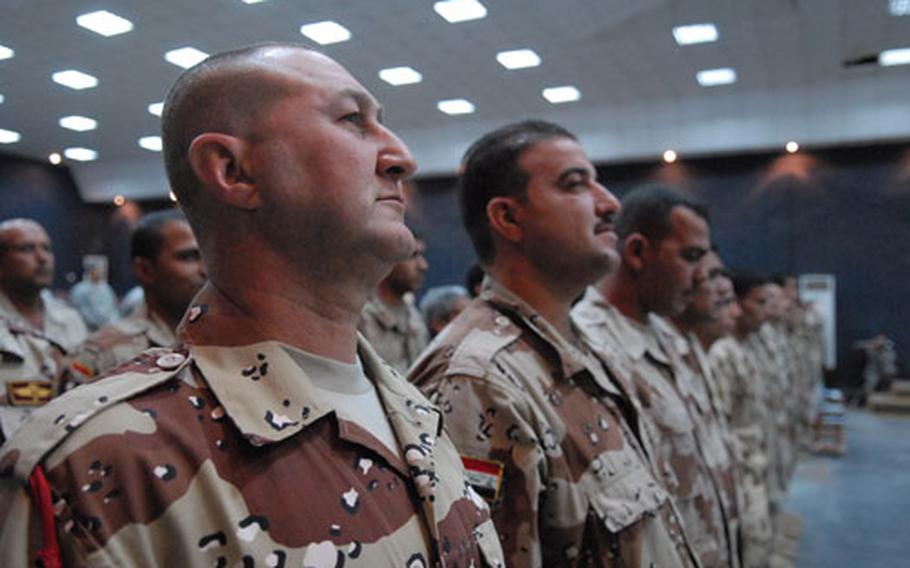 Iraqi Army Sgt. Yousef Yacob stands at attention Sunday in Taji, Iraq, at the beginning of a graduation ceremony for students in the master trainer’s course. The course aims to teach noncommissioned officers so that they can train their fellow soldiers. (James Warden / S&S)

TAJI, Iraq &#8212; An Iraqi and an American general had already spoken to the audience Sunday when Iraqi Army Sgt. Yousef Yacob took the stage during the graduation of the first master trainer&#8217;s course for Iraqi troops.

Yacob was the top graduate in the course, but his speech followed some eloquent words by his superiors. When he got up there, though, he thundered out a moving poem on patriotism and the beauty of the Iraqi capital that won the loudest applause of the day.

The moment was an appropriate one to conclude a course that aims to raise the status of Iraqi noncommissioned officers like Yacob.

In Western armies, NCOs have historically had an important role, said Brig. Gen. Robin Swan, commander of the Coalition Army Advisory Team. The NCOs are the first-level tactical decision-makers and responsible for training troops to standard.

But Iraqi NCOs, like those in other Middle Eastern armies, have traditionally not had the responsibilities than their Western counterparts had. The master trainer&#8217;s course prepares the Iraqi NCOs to take on those responsibilities, said 1st Sgt. Howard Anderson, the course&#8217;s first sergeant.

The students practiced many skills during the 19-day session: Working together in combat teams, learning to handle prisoners and studying roadside bombs.

Yet Yousef said no single skill in the course stood out above the others. Instead, the class focused on an overall method to help the NCOs pass along their knowledge to other Iraqi soldiers.

That method focuses on &#8220;down in the dirt&#8221; hands-on training in contrast to the more common lecture style, Swan said.

The soldiers won&#8217;t have to wait long to put that method into action. Many like Yacob will form the cadre for future master trainer&#8217;s courses. Yet he and his fellow students are undeterred.