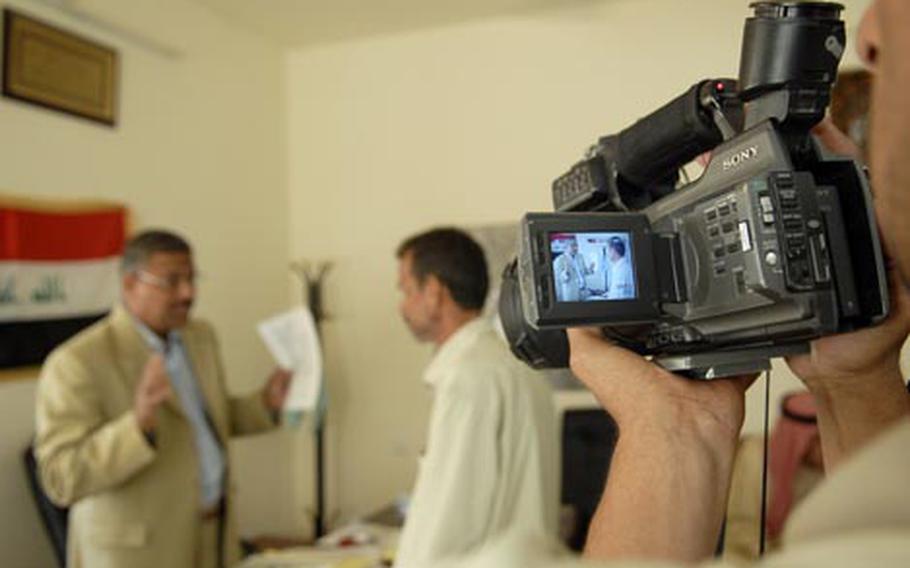 A cameraman with the Diyala Media Center films a report on the mayor of Canaan. (Heath Druzin / S&S)

A cameraman with the Diyala Media Center films a report on the mayor of Canaan. (Heath Druzin / S&S) 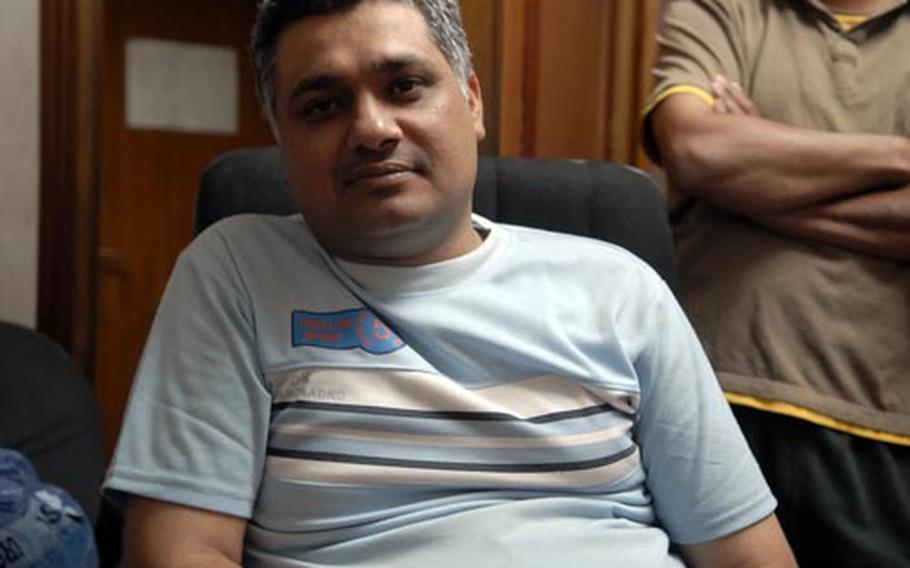 DIYALA PROVINCE, Iraq &#8212; Muhammad Khalil looks warily to the quickly approaching day when U.S. Strykers rumble out of his dust-blown desert compound for the last time. He fears it may be a deadly change.

Khalil is neither a member of the Iraqi Security Forces nor a high-profile politician, but he works in one of the most dangerous professions in Iraq: journalism.

&#8220;Right now if you write an article against someone powerful, he could send someone to come kill you in the night,&#8221; said Khalil, the manager of the Diyala Media Center, an affiliate of al-Iraqiya, a national television network set up after the fall of Saddam Hussein.

The Diyala Media Center&#8217;s plight is repeated all over Iraq, as U.S. forces draw down. While the U.S. presence is widely unpopular in Iraq, many residents and Iraq experts worry that violence will flare as the U.S. pulls out and insurgents test the Iraqi security forces.

At least 139 journalists have been killed in Iraq since the U.S. invasion in 2003, according to a June report by the New York-based nonprofit Committee to Protect Journalists, which promotes press freedom worldwide.

The center&#8217;s journalists provide local reporting in volatile Diyala province. During much of the war, the province, once a stronghold of al-Qaida, local news was hard to come by as reporters became insurgent targets.

Khalil says he feels threatened not only by insurgents but also politicians, who constantly pressure him to back off critical stories, such as a recent story on problems with trash pick-up in the city of Muqdadiyah. It showed mountains of garbage in the city, even though local contractors were being paid tens of thousands of dollars to pick up trash.

The Diyala Media Center is hard to miss, its red and white transmitter rising 1,000 feet above a vast expanse of scrub desert, broken only by the occasional mud-straw hut and herd of sheep. It doubles as a rough-hewn combat outpost for U.S. soldiers with the 3rd Stryker Brigade Combat Team, 2nd Infantry Division. It is surrounded by dirt-filled barriers known as Hescos, and everyone from media center employees to local city council members are searched by soldiers before entering.

Khalil is quick to laugh and flash a weary smile, but the 32-year-old&#8217;s graying hair speaks to the tragic recent history of his staff. Ten of Khalil&#8217;s employees have been killed since the U.S. invasion, all between 2004 and 2007 when fighting was particularly intense here. Many were either ambushed on their way to work, or kidnapped and killed, Khalil said.

Khalil himself was kidnapped during the height of the violence in Diyala province, escaping only when his captors fled after seeing a nearby U.S. military patrol. Through all of it, he&#8217;s continued beaming the news to his impoverished province.

He says he has been trying to open an office in Baqouba, the provincial capital, but has been blocked by politicians angry with his staff&#8217;s critical reporting.

The pay isn&#8217;t great &#8212; even as manager, Khalil makes the equivalent of about $700 per month, slightly more than an enlisted Iraqi soldier. Still, Khalil&#8217;s staff, a mix of Shiites, Sunnis, Christians and Kurds, have a steely determination to do their job, saying it&#8217;s important to the future of their country&#8217;s fledgling democracy.

Ayad Salman, a cameraman for the media center, declined to have his photo taken for fear of retribution for his job. Despite the danger, though, he says he has no plans to find a safer profession.

In the next few months, the soldiers will be leaving as part of the steady U.S. withdrawal, and Khalil will have to rely on his 20-man security team for protection. He&#8217;s not looking forward to the change.