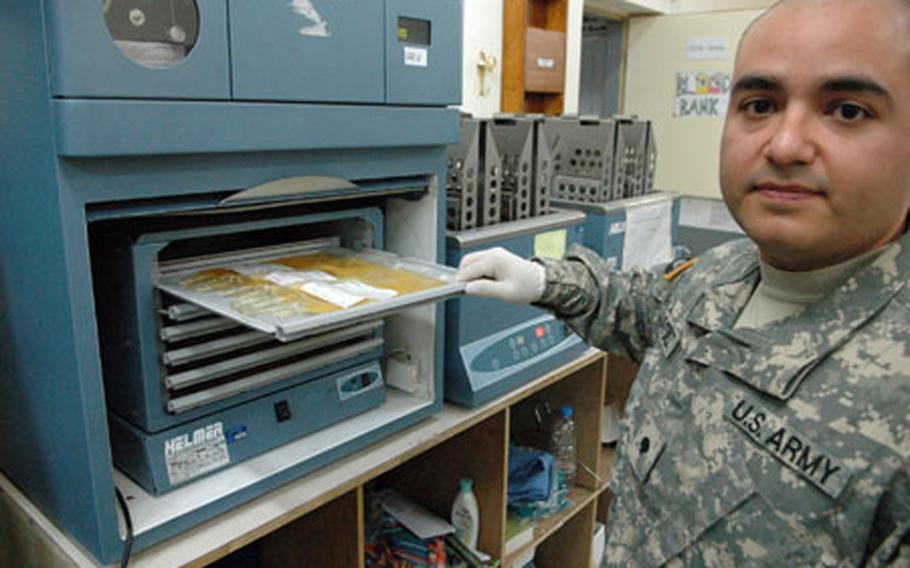 Spec. Carlos Martinez, 26, of Myrtle Beach, S.C., examines a tray of blood platelets in a blood agitator Friday. The machine rocks the blood clotting agents back and forth so that they can be stored without clotting. (Monte Morin / S&S)

Spec. Carlos Martinez, 26, of Myrtle Beach, S.C., examines a tray of blood platelets in a blood agitator Friday. The machine rocks the blood clotting agents back and forth so that they can be stored without clotting. (Monte Morin / S&S) 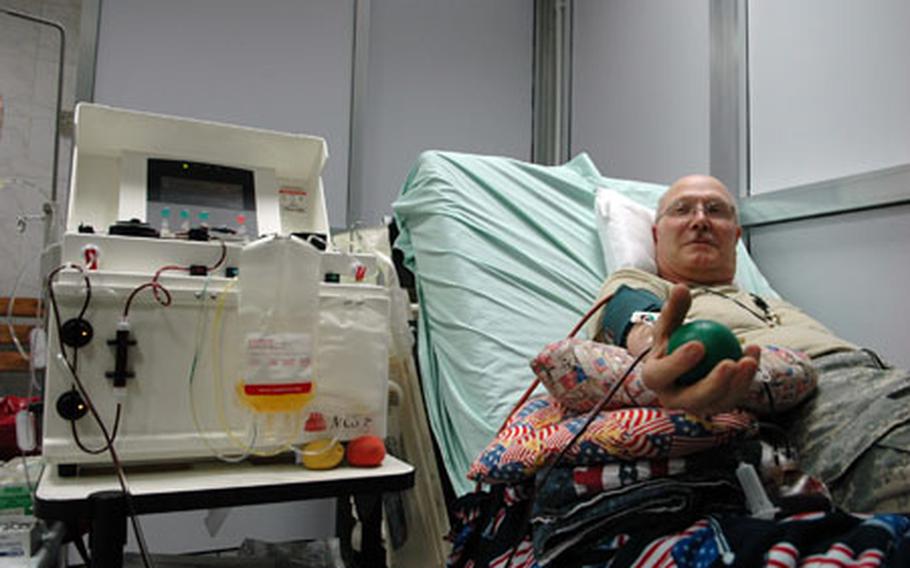 Col. Paul Dietrich, 57, of Staten Island, N.Y., donates blood plasma and platelets Friday at Ibn Sina Hospital&#39;s blood donor center in Baghdad&#39;s International Zone. The hemapharesis machine beside him collects the plasma and clotting agents while pumping red blood cells back into his body. By using the machine, Dietrich and others can donate more frequently than if they donated quantities of whole blood. (Monte Morin / S&S) BAGHDAD &#8212; At the 28th Combat Support Hospital, where doctors, nurses and medics treat scores of Iraqi civilians and U.S. soldiers on a weekly basis, there are few resources more critical than blood.

In addition to supplying blood to the hospital&#8217;s operating rooms, Martinez and other medical lab techs routinely examine the blood of casualties to determine blood type, coagulant levels and blood chemistry in a matter of minutes. The techs also run tests on blood and urine for clues to a patient&#8217;s illness.

Across the hallway of the 28th CSH-operated Ibn Sina Hospital in Baghdad&#8217;s International Zone, technicians collect plasma and blood platelets &#8212; the stuff that makes blood clot &#8212; from donors. A device called a hemapheresis machine separates plasma and platelets from a donor&#8217;s blood and pumps red blood cells back into the body.

By using the machine, technicians can collect more of those materials than they can from donations of whole blood.

Dietrich, an oil and gas liaison officer assigned to the Coalition&#8217;s Energy Fusion Center, squeezed a rubber ball in his hand as plastic tubing carried blood from his arm into the machine and back.

There has been a surge in donors recently, but Staff Sgt. George Anderson, 30, of Philadelphia, said that dry spells are not uncommon.