Buy Photo
A resident of a squatters' camp in south Baghdad stands in his empty home on Tuesday. He lived with five other people in the one-room, cinder-block home and cleared out his possessions ahead of the government's steps to raze the camp. A day laborer, he says he can't afford rent and has no idea what he will do now. (Heath Druzin/Stars and Stripes)

Buy Photo
A resident of a squatters' camp in south Baghdad stands in his empty home on Tuesday. He lived with five other people in the one-room, cinder-block home and cleared out his possessions ahead of the government's steps to raze the camp. A day laborer, he says he can't afford rent and has no idea what he will do now. (Heath Druzin/Stars and Stripes) 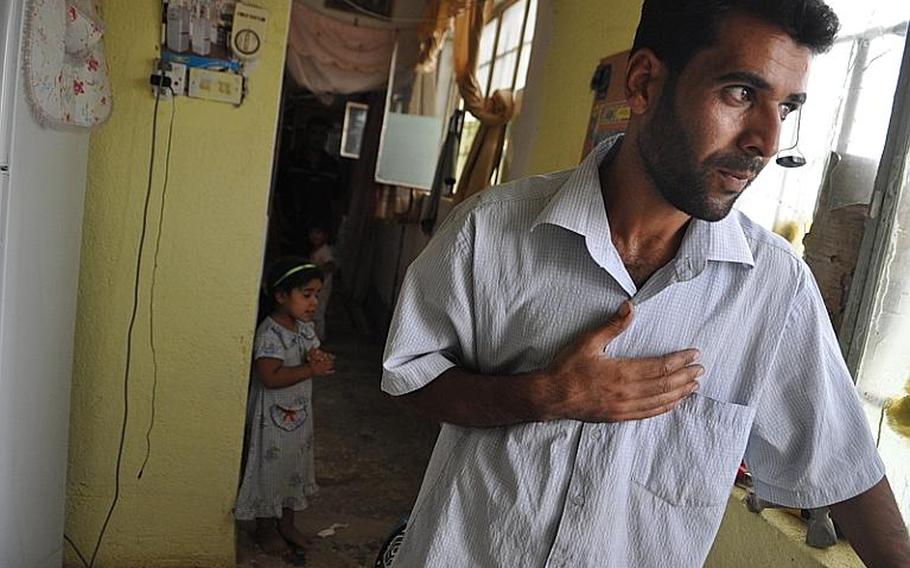 Buy Photo
Ali Gatt stands in his home in a squatters' camp in south Baghdad while his daughters play behind him. He was defying an order from the government to evacuate the camp before it's leveled. (Heath Druzin/Stars and Stripes) 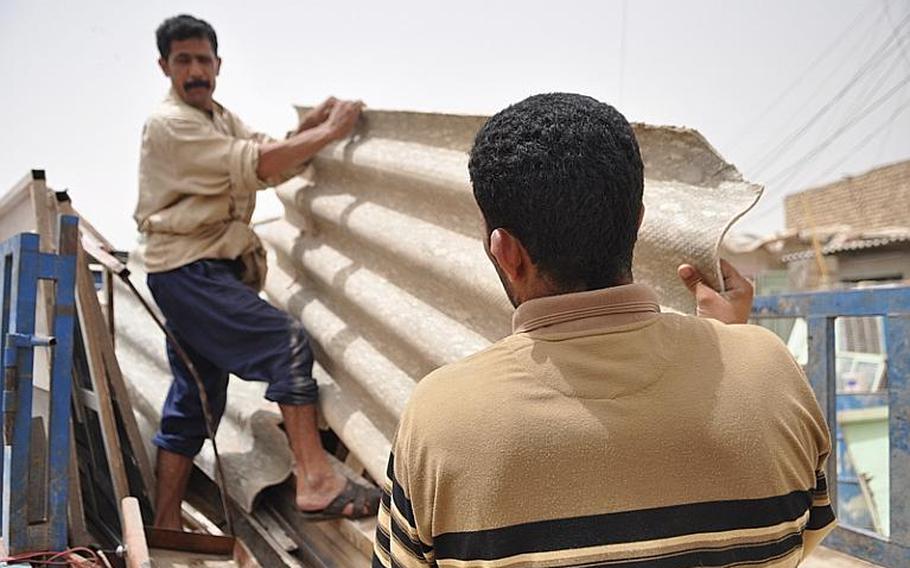 Buy Photo
Residents of a squatters' camp load part of a makeshift roof onto a truck on Tuesday. The impoverished residents tried to salvage anything of value ahead of the Iraqi government's steps to raze the settlement. (Heath Druzin/Stars and Stripes)

BAGHDAD &mdash; The Iraqi government on Tuesday began razing one of Baghdad&rsquo;s largest squatter camps, a move that could leave thousands of people homeless.

Grim-faced residents hurriedly gathered their belongings, scurrying to salvage anything of value. Dump trucks full of rubble from destroyed homes rumbled across a rocky patch of land.

The sprawling settlement, in the Zafaraniyah neighborhood in southern Baghdad, is a mishmash of cinder-block homes and rutted, garbage-strewn dirt tracks. Most residents live without electricity and running water.

&ldquo;Even the Palestinians have it better than us,&rdquo; said Omunem Fadila, a widow who shared a small cinder-block hovel with her four daughters and their families.

Fadila says they have no money and nowhere to go and will have to sleep on the street.Gen. Qassim Atta, spokesman for military operations in Baghdad, said the order to destroy the camp came from the Ministry of Oil because the settlement is built on top of an oil pipeline.

Residents said they were told the demolition was necessary to keep the pipeline secure.

Hundreds of Iraqi Federal Police officers gathered on the outskirts of the settlement Tuesday. They would not allow photos of the trucks and ordered a reporter to leave the neighborhood.

Iraq&rsquo;s massive internal refugee crisis, sparked by a sectarian violence that chased many Shiites and Sunnis from formerly mixed neighborhoods, has caused an explosion of squatter camps. The U.N. High Commissioner for Refugees estimates that 500,000 displaced Iraqis live in squatter camps, including 260,000 in Baghdad.

The camps have become an embarrassing reminder of the Iraqi government&rsquo;s inability to deal with the crisis. Acting Prime Minister Nouri al-Maliki has made repeated pledges to clear out everyone squatting on public land.

Abdul Samad Sultan, head of the Iraqi Ministry for Displacement and Migration, downplayed the role that Iraq&rsquo;s violence played in the squatters&rsquo; lives, estimating that seven families in the entire settlement fled violence.

&ldquo;It is a small percent,&rdquo; he said.

But residents of the camp said that most of those living there had fled Iraq&rsquo;s bloody sectarian fighting. Many are Shiites who were chased from mixed or mostly Sunni neighborhoods in Baghdad, they said.

On Tuesday, at least one man was defying the order to leave. Ali Gatt, 30, said he has lived in the home he built in the camp for four years and he can&rsquo;t afford rent on what he makes as a day laborer. He said he is staying there with his wife and two young daughters no matter what the government says.

&ldquo;If they want to knock my house down on my head, it&rsquo;s fine,&rdquo; he said. &ldquo;I&rsquo;m not going to leave.&rdquo;