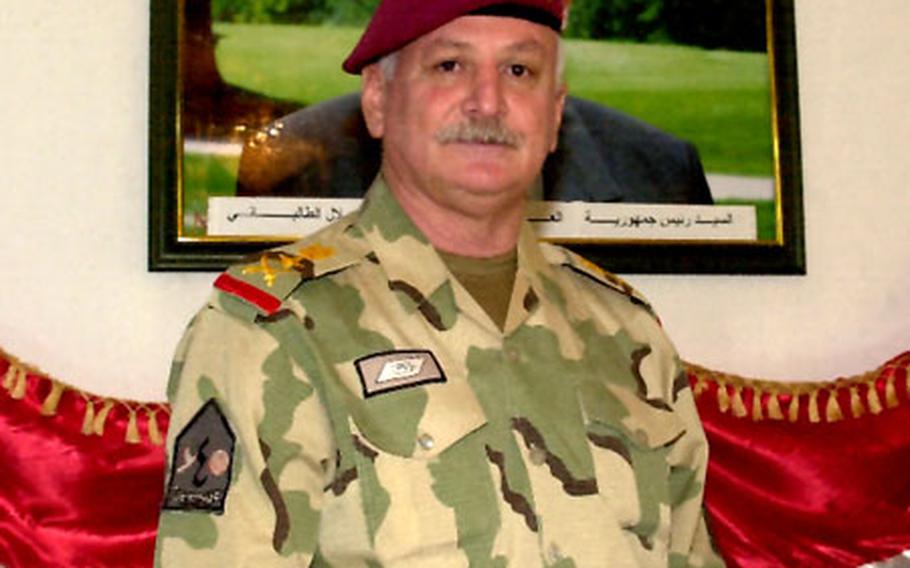 Lt. Gen. Abdel Aziz says if the Iraqi Defense Ministry “gave the Iraqi army complete authority, we could take care of things in six months. But if they don’t authorize us, it could take five years.” (Erik Slavin / S&S)

Aziz listens while he and an American officer note the details. He smiles, shakes their hands and escorts them out.

Take away the traditional dishashas and change the subject to something more mundane, and it&#8217;s a scene that could be taking place anywhere in America between an elected official and constituents.

Playing to public concerns is a new role for Aziz, the Kurdish commander of the Iraqi army&#8217;s 4th Division, headquartered in Saddam Hussein&#8217;s Sunni hometown of Tikrit.

Before the division arrived in August, rumors circulated that a former Kurdish revolutionary Peshmerga division was taking control. Tikrit residents began organizing and nominating leaders for a potential resistance.

Aziz began meeting with the local sheiks, persuading them that he saw himself as an Iraqi like them. Organized citizen resistance in Tikrit against the division faded.

However, Aziz remains a target elsewhere.

He survived an attack on his vehicle outside Kirkuk last week with minimal injuries. One of his bodyguards was hospitalized.

Despite the attacks, Aziz maintains supreme confidence in his division, while sharing a lesser opinion of the Iraqi Ministry of Defense.

Aziz accuses the ministry of monopolizing power through micromanagement, leaving him without enough input on division officer selection and the budget. He says political parties have manipulated the ministry, in some cases, into commissioning illiterate colonels and other officers who lack any military experience.

Aziz also blames political party affiliation and ethnic sectarianism for the reason, in his mind, why other divisions are lagging behind his own. Aziz says his division will succeed because his soldiers will learn they can be stronger if they embrace his division&#8217;s multi-ethnic makeup.

This example, along with the help U.S. soldiers have provided by teaching their methods, will make the Iraqi division stronger, he said.