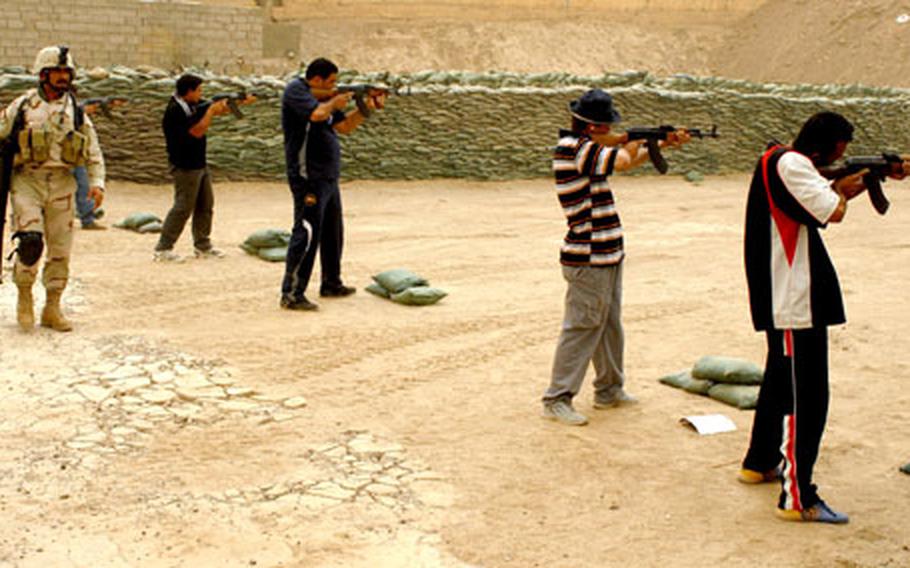 Sgt. Mohammad, with the 3rd Battalion, 42nd Brigade, 11th Iraqi Army Division, instructs "Neighborhood Guard" recruits from the Jamilla neighborhood of the Sadr City district of Baghdad on Tuesday. They were learning to fire AK-47 rifles at a range on Forward Operating Base War Eagle in northern Baghdad. (Zach Mott / U.S. Army)

BAGHDAD &#8212; Iraqi forces are continuing a slow push through the Shiite slums of eastern Baghdad, and U.S. forces have begun recruiting locals from the area to join armed watch groups, officials said Thursday.

Iraqi troops have been in Sadr City since a truce in early May with Shiite militias allowed them to enter and search for weapons. And while the Iraqi troop presence is limited to parts of the district, U.S. officials say they are starting to receive tips on weapons cache locations.

In one day this week, the materials for making more than 100 roadside bombs were confiscated by Iraqi troops, U.S. military officials said.

At the same time, U.S. troops have begun recruiting and training local cadres of civilians in Sadr City separate from the so-called "Sons of Iraq" or "Awakening" groups that have been formed throughout the country and whose members are paid by the U.S. military.

These new groups in Sadr City, called the "Neighborhood Guard," are being trained by U.S. and Iraq troops in everything from common courtesy to weapons familiarization and military bearing, according to a statement issued Thursday by the U.S. military.

"This is what&#8217;s going to get the Iraqi army out of the cities and eventually turn [the cities] over to police," said Maj. Philip Halliburton, a military transition team chief working with the 42nd Brigade, 11th Iraqi Army division.

Local armed civilian groups, in their various forms, have been credited as one reason for marked improvements in security around the country. But military officials have conceded they are uncertain of the groups&#8217; future; efforts to move them into official Iraqi security forces, such as the army and police are being combined with vocational training. Officials with the 3rd Infantry Division, which recently handed over command of areas south of Baghdad, acknowledged the "Sons of Iraq" and associated programs were not a long-term solution.

Still, the groups &#8212; including the new watch groups being recruited in Sadr City &#8212; are seen as an interim step to expanding Iraqi police control.

Training for the groups in Sadr City is done in three-day courses, officials said. The members are then put at checkpoints and other neighborhood posts.

"Now it&#8217;s somebody they know providing security, not just some nameless face," Halliburton was quoted as saying about local residents. "Anything that&#8217;s going wrong, they&#8217;ll be more inclined to share, because they live and work in that neighborhood."