Iraqi forces grateful for US support in Islamic State fight, even as battle turns messy 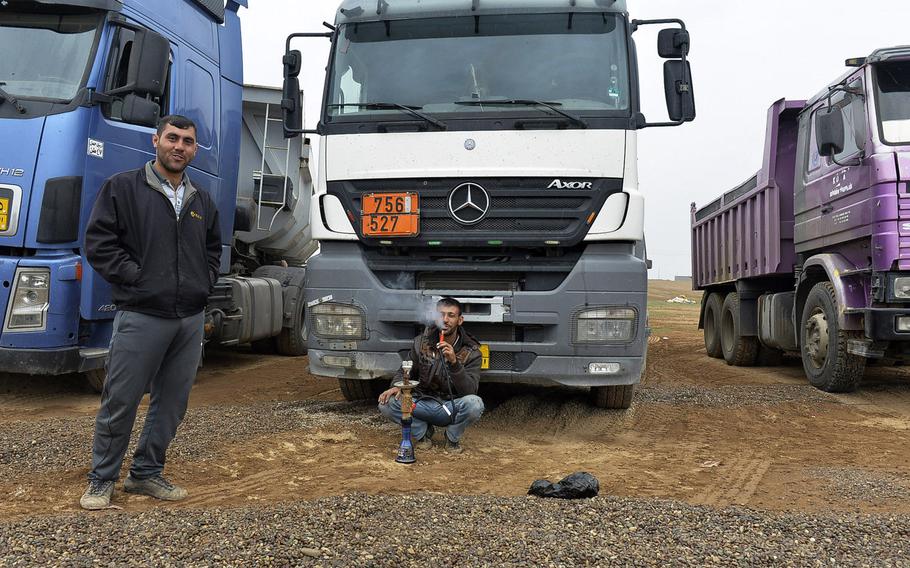 Buy Photo
Iraqi drivers relax in front of their trucks, which brought tons of gravel to a coalition tactical base under construction south of Mosul, March 2, 2017. (Chad Garland/Stars and Stripes)

Buy Photo
Iraqi drivers relax in front of their trucks, which brought tons of gravel to a coalition tactical base under construction south of Mosul, March 2, 2017. (Chad Garland/Stars and Stripes) 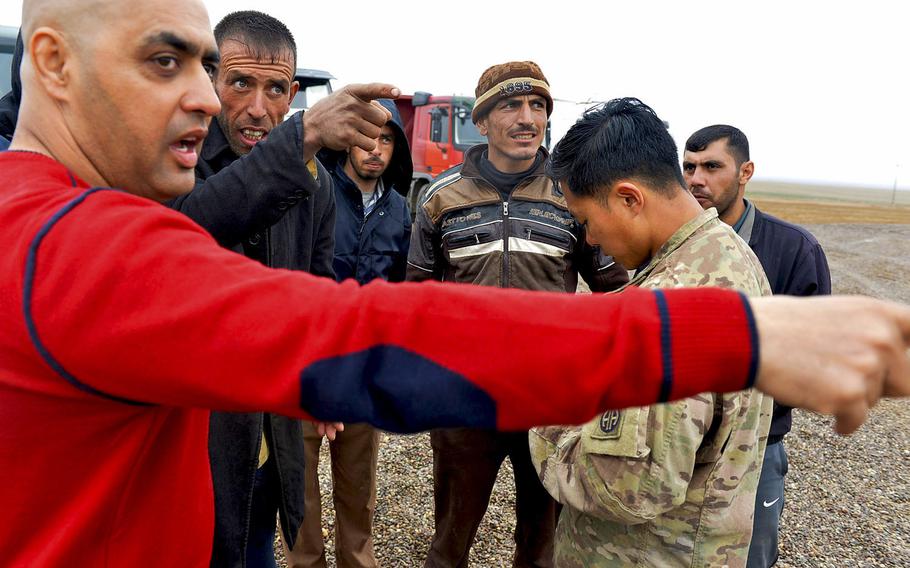 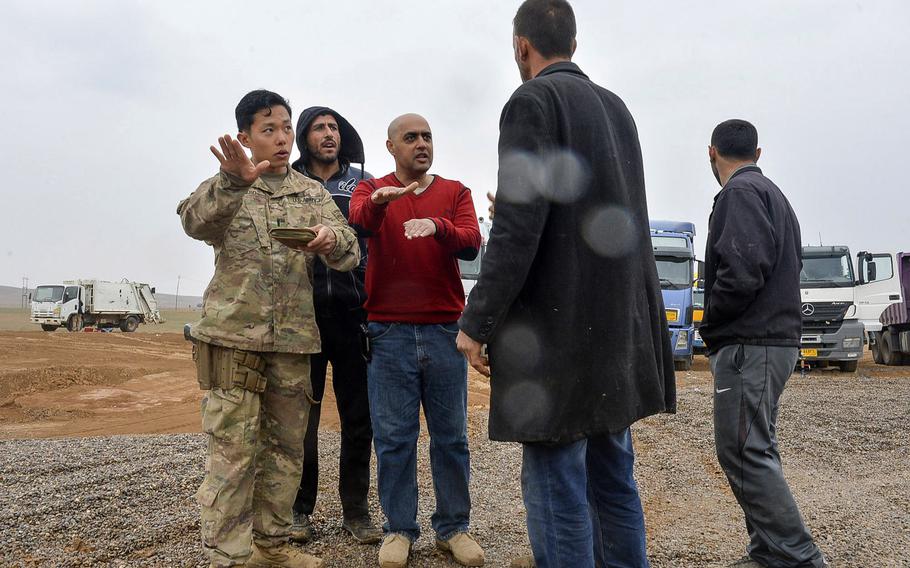 Buy Photo
U.S. Army 1st Lt. Adam Ward gives a thumbs-up to an Iraqi truck driver after passing on instructions about where to drop gravel on a coalition tactical base being constructed south of Mosul, Iraq, March 2, 2017. (Chad Garland/Stars and Stripes) 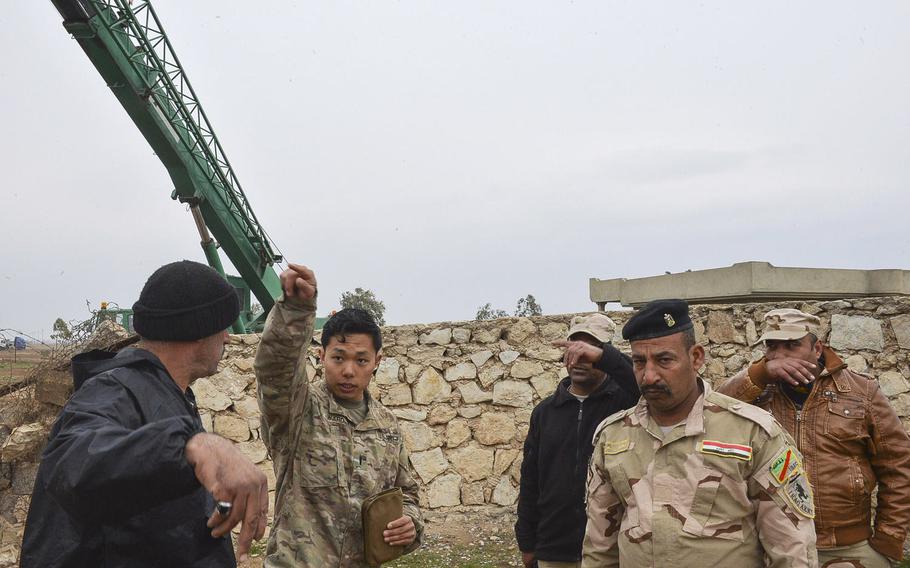 Buy Photo
U.S. Army 1st Lt. Adam Ward gives instructions on the positioning of blast walls and other matters during an impromptu meeting with his Iraqi counterparts on a coalition base being built south of Mosul, Iraq, March 2, 2017. (Chad Garland/Stars and Stripes) 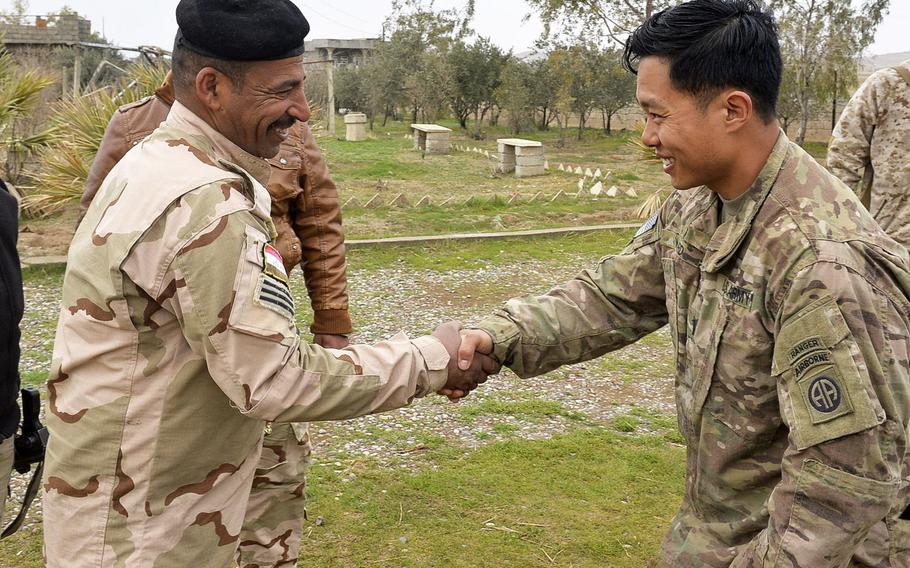 Buy Photo
U.S. Army 1st Lt. Adam Ward shakes hands with an Iraqi counterpart during the construction of a coalition base south of Mosul on Thursday, March 2, 2017. Ward, an infantry officer, was leading the construction of the base near a cluster of houses on a mud-and-grass expanse. (Chad Garland/Stars and Stripes) 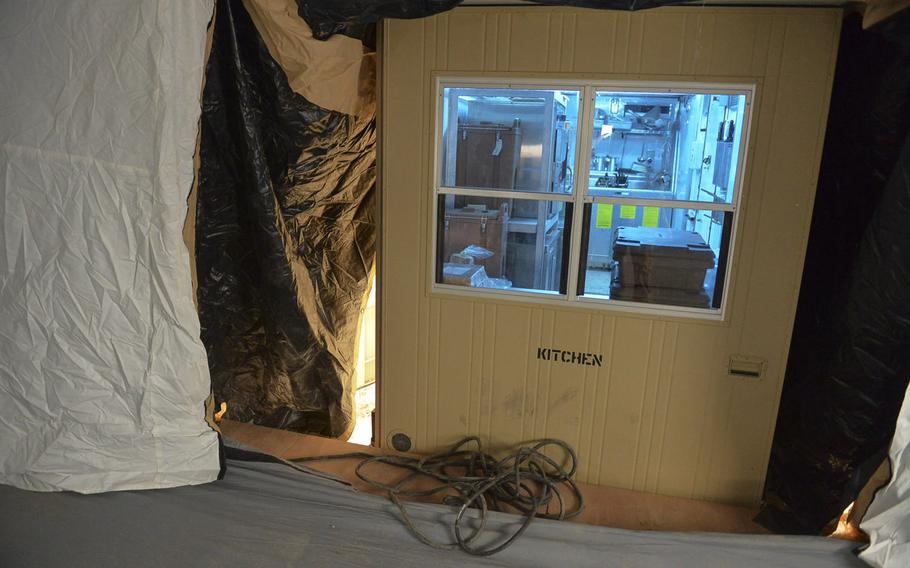 Buy Photo
It doesn't look like much, but a containerized kitchen and tent delivered to a coalition tactical base south of Mosul, pictured here on March 2, 2017, would help sustain the troops of the 2nd Battalion, 508th Infantry Regiment, who are supporting the Iraqi army's 9th Armored Division with intelligence and precision strike capabilities. (Chad Garland/Stars and Stripes) 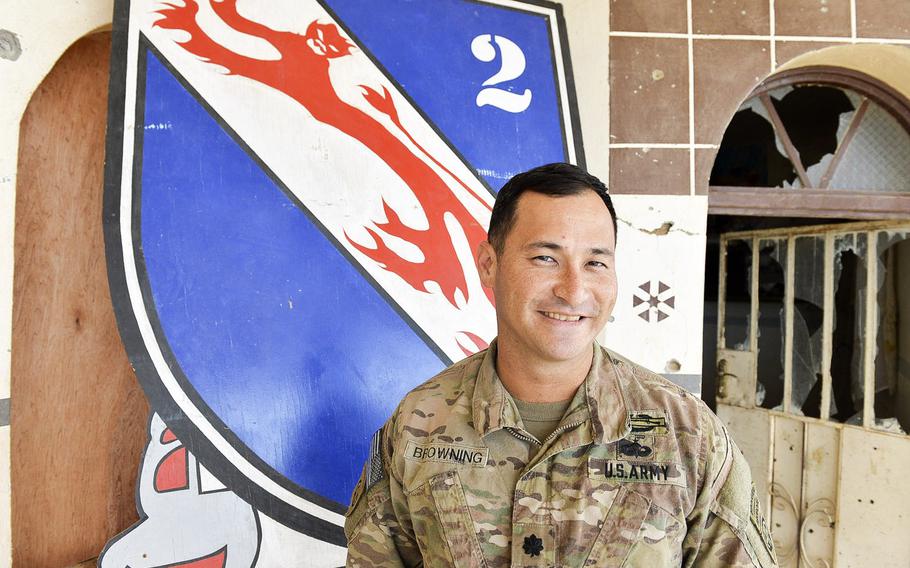 Buy Photo
Lt. Col. James Browning, commander of 2nd Battalion, 508th Parachute Infantry Regiment, 2nd Brigade Combat Team, 82nd Airborne Division, is pictured here on March 2, 2017, in front of the regimental coat of arms at a tactical base south of Mosul, Iraq, where his unit is advising Iraqi forces in the battle for Mosul. (Chad Garland/Stars and Stripes) 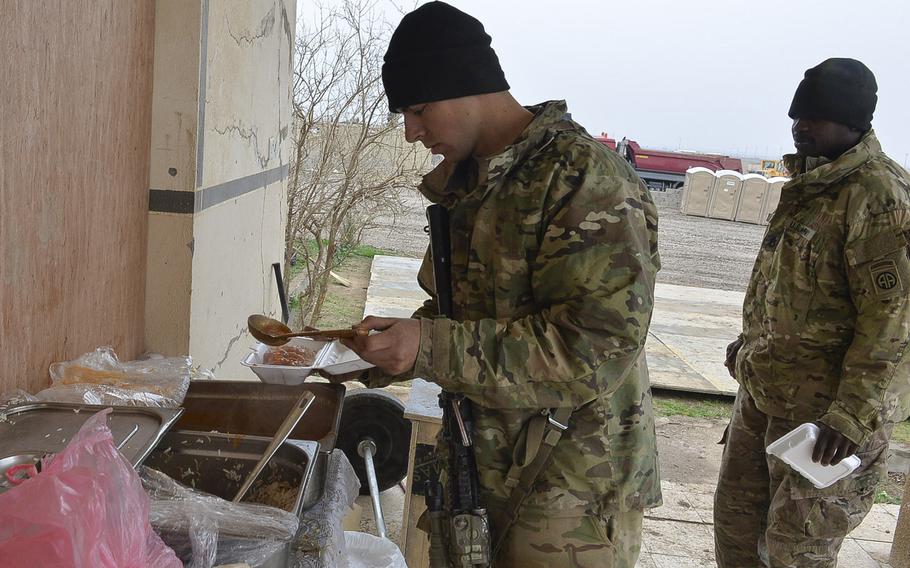 Buy Photo
Spc. Humberto Cadena of Cookeville, Tenn., pours beans over his rice, part of a meal provided to U.S. advisers by the Iraqi army's 9th Amored Division, at a tactical base under construction south of Mosul, March 2, 2017. (Chad Garland/Stars and Stripes) 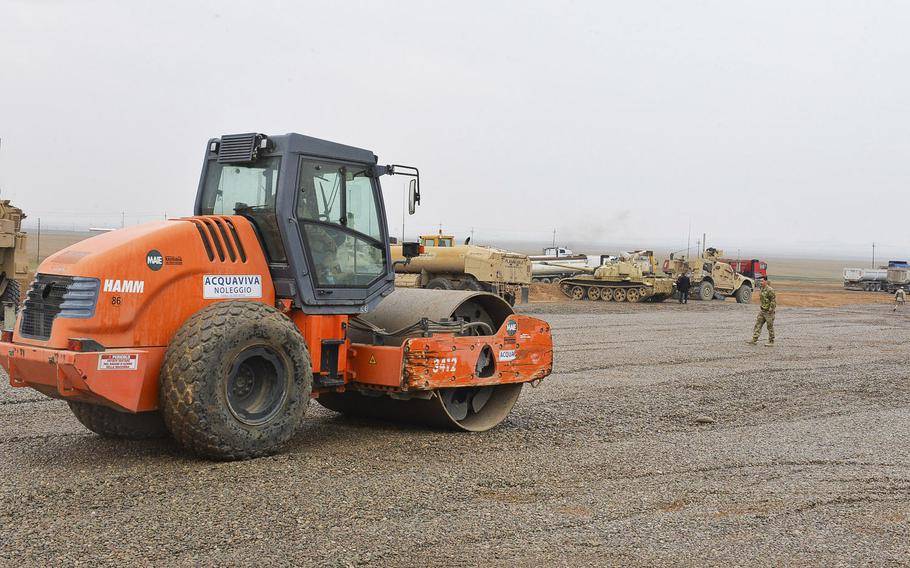 Buy Photo
A soldier with the 37th Brigade Engineer Battalion of the 82nd Airborne Division's 2nd Brigade Combat Team is pictured here on March 2, 2017, operating a road roller to compact gravel that's used to prevent mud from bogging down U.S. troops on a tactical base south of Mosul, Iraq. (Chad Garland/Stars and Stripes) 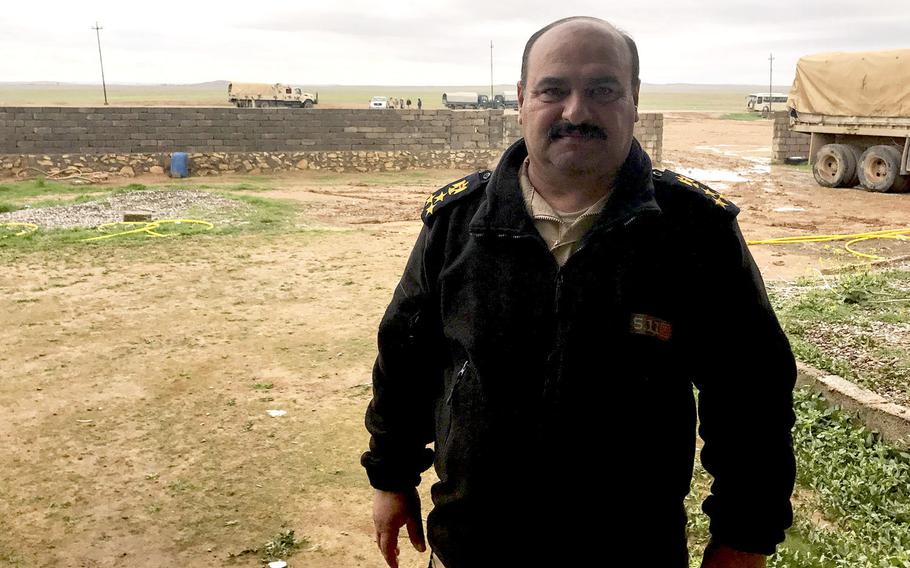 Buy Photo
Brig. Gen. Ahmed Shaker, chief of staff of Iraq's 9th Armored Division, is pictured here on a muddy Iraqi base south of Mosul, near one built by U.S. forces advising the Iraqis and supporting them with intelligence and precision strike capabilities. (Chad Garland/Stars and Stripes) Buy Photo
This muddy and grassy expanse south of Mosul, Iraq, pictured here on March 16, 2017, is near where U.S. troops set up a tactical base from which they advise and assist Iraqi forces battling for control of Mosul. (Chad Garland/Stars and Stripes)

SOUTH OF MOSUL, Iraq — During the wet season, the mud is abundant on the grassy and dusty expanse surrounding clusters of homes here, and it sticks to everything.

U.S. troops who’ve spent time here know this, so when the 2nd Battalion, 508th Infantry Regiment, troops had a chance to build a tactical base from scratch earlier this month, they poured in 2,800 cubic yards of gravel — roughly 4,000 tons — to avoid getting bogged down.

“We may have gone a little bit overboard with the gravel, but we’re not stuck in the mud right now,” said 1st Lt. Adam Ward, an infantry officer overseeing the buildup, on a recent rainy day.

The paratroopers of the 82nd Airborne Division’s 2nd Brigade Combat Team are here, after all, to help keep things moving in the battle to retake Mosul from the Islamic State group. Yet a recent airstrike that killed hundreds of civilians has stirred controversy about the operation, which has stalled in the city’s densely packed western half.

The Iraqis at this base, who have been mainly operating south and west of Mosul to cut off the militants’ escape route into Syria, say the American support is helping win battles and save lives.

“If not for the Americans, we would not be successful,” said Brig. Gen. Ahmed Shaker, the Iraqi unit’s chief of staff, who credits coalition strikes with destroying many car bombs that could have killed his men.

It’s this simple, he said: Iraqi troops call in target information to an Iraqi liaison who is with U.S. troops and passes on the targets to the Americans. Then the targets are destroyed.

The unit recently achieved its main objective when it retook the town of Badush west of Mosul, cutting off the militants’ escape route to Syria.

But aside from Islamic State fighters, Badush was empty, Shaker said. It’s a dramatic contrast to western Mosul. Other military and police units have been fighting to wrest control of Iraq’s second-largest city, where roads are narrow, buildings are fragile and hundreds of thousands of civilians remain, likely held by Islamic State fighters as human shields.

The airstrike last week, which leveled several buildings and killed 200 or more civilians, has some observers questioning whether President Donald Trump, following up on campaign promises to expedite the anti-Islamic State fight, has relaxed the U.S. forces’ rules of engagement. Pentagon officials say that’s not the case and point to an increased tempo in the fight to oust the jihadis from both Iraq and Syria.

While the rules may not have changed, troops at this tactical base said earlier this month that a directive issued about a month before Trump’s inauguration had streamlined earlier strike procedures, allowing U.S. advisers to “show a little bit more of the battlefield” to the Iraqis via aerial surveillance feeds and enabling the Iraqis to make faster decisions.

“Why that’s so important is that now you have an Iraqi general that can say, ‘I have intelligence. I have approval. I can see that ... particular enemy on the ground. I can understand what the civilian population is on the ground,’” said Lt. Col. James Browning, the battalion commander here. “That authority is pushed down to now where he can see the lethality of saying yes (to a particular strike).”

With the help of Browning’s team, the Iraqi liaison officer selects appropriate munitions meant to avoid civilian casualties and other unintended effects for “the smallest and most surgical strike.”

Iraqi officers had criticized the earlier procedures under the Obama administration for often denying airstrikes because of the risk of civilian casualties. Those decisions were often made farther from the battlefield.

Authorized in late December in the final weeks of the Obama administration, the new process “empowers to the right level” and provides a powerful mixture of accountability and lethality, Browning said.

“I think right now, this is the most responsible process that we can possibly do to lessen it or to alleviate it any more...there would be less accountability.”

But the coalition has come under fire since last week’s strike in Mosul and two more in Syria that reportedly killed dozens more. The incidents have raised questions about whether enough is being done to reduce the risks of noncombatant casualties.

Iraqi officials have said that they called in the Mosul strike against Islamic State snipers on the roofs of houses there but that they were unaware of civilians occupying the basements.

International humanitarian law requires military forces to avoid civilian casualties, and U.S. forces are learning that failing to do so can play into the propaganda of their media-savvy enemies. The recent strikes in Iraq and Syria are potentially embarrassing given Washington’s criticism of Russia for civilian casualties in Aleppo caused by that country’s intervention in Syria.

Iraqi officers have said their priority is to minimize civilian suffering in Mosul, where hundreds of thousands have fled the violence since the offensive began in October. They blame the civilian deaths on the Islamic State fighters, who troops and independent observers say are intentionally endangering residents to slow the Iraqi advance and sideline coalition air power.

South of Mosul, Browning said, the enhanced cooperation with the Iraqis isn’t just about speeding up the strike process. It also helps the Iraqis cut through some of the “fog of war” to better maneuver their forces.

“Now they’re able to pick up the phone and (say) like, ‘I see you. I see what’s going on. Let me tell you what I see on the screen. Maneuver your forces a little bit to the right and flank because you’re at a better point of advantage if you’re there,” said Browning, a 37-year-old Fayetteville, N.C.-native.

“It’s powerful ... like having an angel be able to tell you directly what’s going on.”

Browning said that when the Iraqi liaison officer gets a call from ground troops who have come under fire, he treats it as if Americans were taking fire.

“Just imagine if I’m getting shot at, my boys are there and they’re dying and they’re requesting an airstrike,” he said. “I look at it the exact same way.”

The directive that enables that support also pushed hundreds of Americans out to accompany Iraqi units closer to the fight, where they are often relying on one another. The number of tactical bases like the one where Browning and his troops live is a secret, but U.S. officials have said it’s more than five. There may soon be more, as additional troops from the 82nd Airborne Division have been sent to support Iraqi forces here.

Before dropping their packs at this austere post about 12 miles south of Mosul, Browning and his troops were living and eating with the Iraqis for nearly two months as they skirted city. They took only what they could carry in their assault packs or lash onto their vehicles.

“In the last 50 days, we have picked up the entire circus, (and) we’ve moved from spot to spot,” Browning said, speaking on the same morning a containerized kitchen, shower unit and laundry facility showed up at what would become a more permanent and comfortable camp. “They were living like soldiers — as they should be.”

The men and women in his unit had been sleeping on the floors of cold houses, bathing with baby wipes and using trash bags as toilets as they moved five times from an area northeast of Mosul south to Qayara Airfield West, then back north toward Mosul on the western bank of the Tigris River.

“Whatever it takes — if it requires us to sleep in the dirt ... for the Iraqis to be successful — we’ll happily do it,” Browning said.

As they’ve worked together, the Americans and Iraqis have grown closer, said Shaker, the Iraqi general.

“We are no longer foes, we are friends,” he said. “We are more than friends. That’s good for us.”