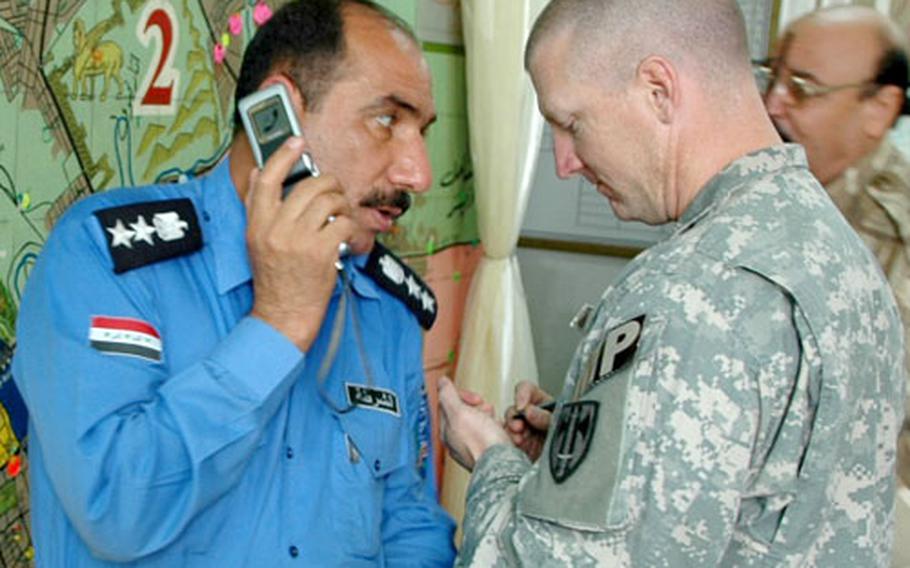 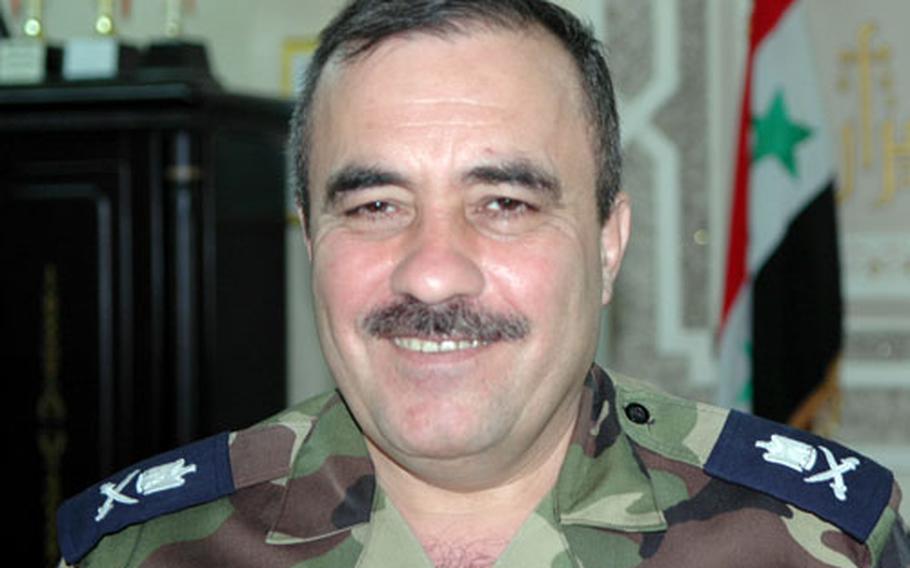 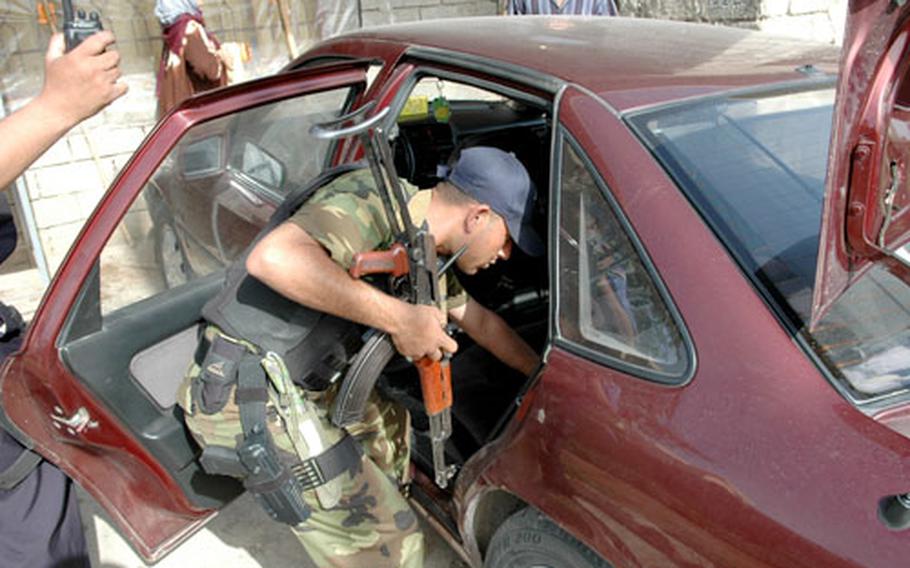 An Iraqi police officer searches a car in southeast Mosul on Wednesday as part of Operation Lion’s Hunt, a sweeping cordon-and-search exercise that is ongoing in the northern Iraq city. (Monte Morin / S&S) 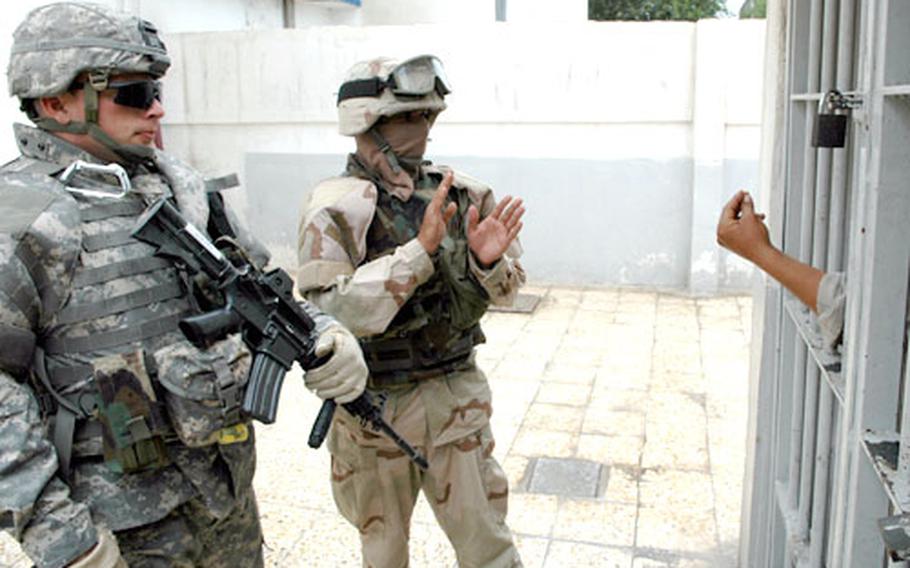 A suspected insurgent who was detained during a massive sweep of Mosul neighborhoods this week speaks to Staff Sgt. Jeremy Lucas, 27, of Columbia, S.C., through an interpreter Friday. (Monte Morin / S&S) 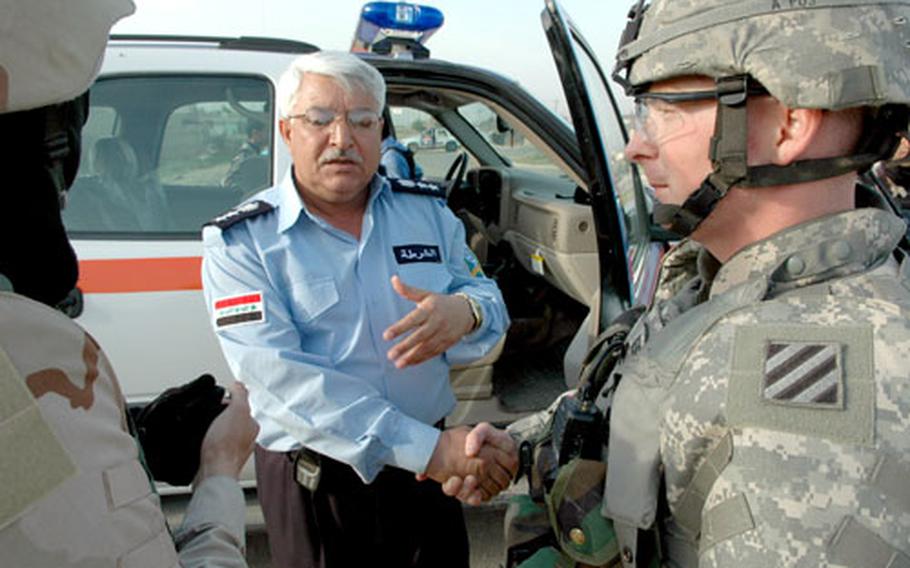 The lieutenants and a group of patrolmen had shot it out with an insurgent the day before, during a massive, ongoing sweep of Mosul by Iraqi forces. Yet after firing off all of their ammunition, the lawmen had no dead or captured insurgents.

Instead, they had a bunch of angry business owners whose buildings were damaged in the gunbattle. And the officers told one patrolman&#8217;s family that he had been killed in the shootout, when in fact he was only wounded in the leg.

The exchange was just one of many that has earned Khalaf the reputation as being a tough and demanding commander of Mosul&#8217;s police department in the new Iraq.

As the Iraqi police chief of operations for Nineveh province, Khalaf helped direct more than 1,500 Iraqi police and army units during the massive cordon-and -search operation under way in Mosul.

The operation, dubbed Operation Lion&#8217;s Hunt and planned and executed entirely by Iraqi security forces, marks a turnaround from 18 months ago, when Iraqi police collapsed before an insurgent onslaught. Lion&#8217;s Hunt, U.S. advisers say, is proof that local police are now poised to take full responsibility for the city&#8217;s security.

&#8220;The million dollar question is &#8212; how much longer do they need our support to function here,&#8221; said Master Sgt. John Ladik, 38, of the Hanau, Germany-based 709th Military Police Battalion, one of the U.S. Army units advising the Iraqi police.

The operation was conceived as part pre-emptive strike against insurgents, part public relations campaign and part joint maneuver training with the Iraqi army. Since the operation kicked off April 30, insurgent attacks in the city have dropped markedly.

In most cases, the suspected insurgents are from out of town &#8212; many from the northwest city of Tal Afar &#8212; and have tested positive for having explosives residue on their hands. A large shuttle bus follows police commanders through the streets, ferrying prisoners to local lockups.

The operation was the idea of Iraqi police Maj. Gen. Wathiq Mohammed Abdul Khadir al-Hamdani, the provincial police chief and a former commander in Saddam&#8217;s army.

&#8220;As a commander in the former Iraqi army, I know that the best defense is to make an attack,&#8221; the provincial chief said. &#8220;I want to prove to the people of Mosul that the police are stronger than these insurgents.&#8221;

Throughout the operation, Iraqi police commanders have gathered in the early morning each day to guide officers through the operation. They are assisted by an Iraqi army liaison and U.S. military advisers, plus a small contingent from the 172nd Stryker Brigade Combat Team that has helped establish cordons around city neighborhoods.

According to U.S. advisers and Iraqi commanders, the operation has already paid benefits with respect to local residents.

On Friday, a crowd of dozens of civilians captured and bound a suspected criminal and brought him to the front gate of a local police station in western Mosul as Lucas visited the station.

The operation was also aimed at improving the relationship between Iraqi police officers and Iraqi army soldiers in Mosul.

As Iraqi army units secure intersections and bridges within the city, Iraqi police conduct searches on most residences, but not all. U.S. advisers call the searches &#8220;passive searches&#8221; and say they&#8217;ve hit roughly 60 percent to 70 percent of the homes in a given neighborhood.

On Wednesday, Iraqi police and army units searched a neighborhood in southeast Mosul, one of the city&#8217;s more troubled neighborhoods. Capt. Larry Bergeron, 31, of the 459th Military Police Company was on hand to observe the process and chat with Iraqi police commanders who sped to and from search sites in armored cars and SUVs.

Bergeron, a native of Independence, La., said he believes local security forces could stand on their own within weeks if they had to. He said his judgment was based on extensive interactions with commanders and officers.