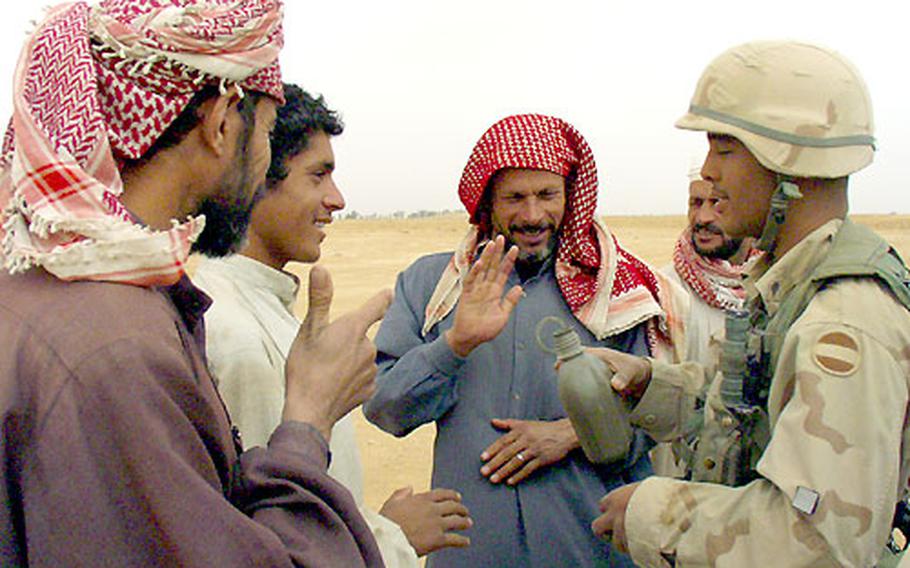 Spc. Brandon Gullen speaks with, from left, Hassan, Sarda, Abbas and She’in. The family has raised wheat, sheep and goats on a farm now used by the U.S. Army since Saddam Hussein&#39;s government chased them from their land near An Nasiriyah three years ago. (Steve Liewer / S&S)

Spc. Brandon Gullen speaks with, from left, Hassan, Sarda, Abbas and She’in. The family has raised wheat, sheep and goats on a farm now used by the U.S. Army since Saddam Hussein&#39;s government chased them from their land near An Nasiriyah three years ago. (Steve Liewer / S&S) 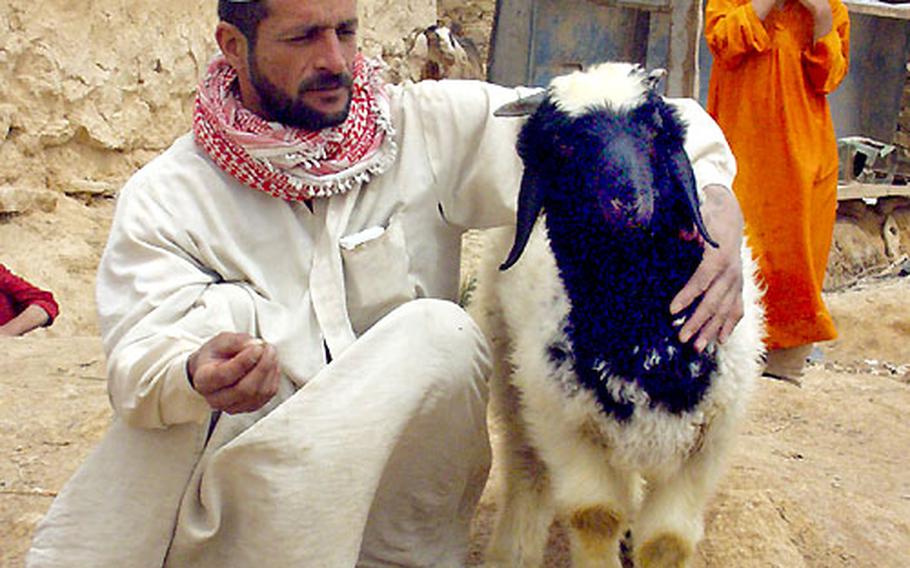 She&#39;in, a cousin of the Abed brothers, squats to pet one of the family&#39;s flock of sheep. Almost 30 people live in a small house on a farm that the U.S. Army has been using as an airfield in Iraq. (Steve Liewer / S&S) 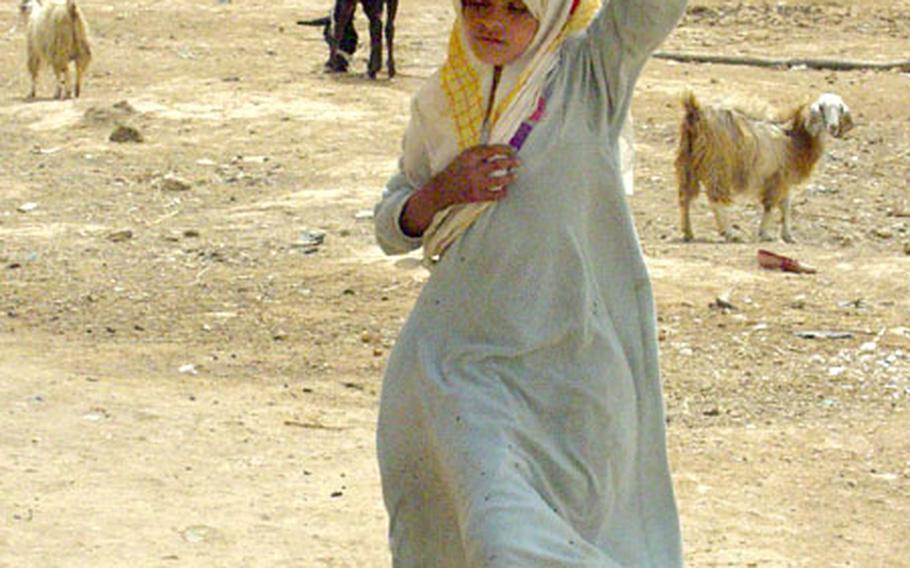 One of the Abed daughters carries a box of food, a gift from U.S. Army soldiers who built their aviation base camp on part of the Abed farm. (Steve Liewer / S&S) 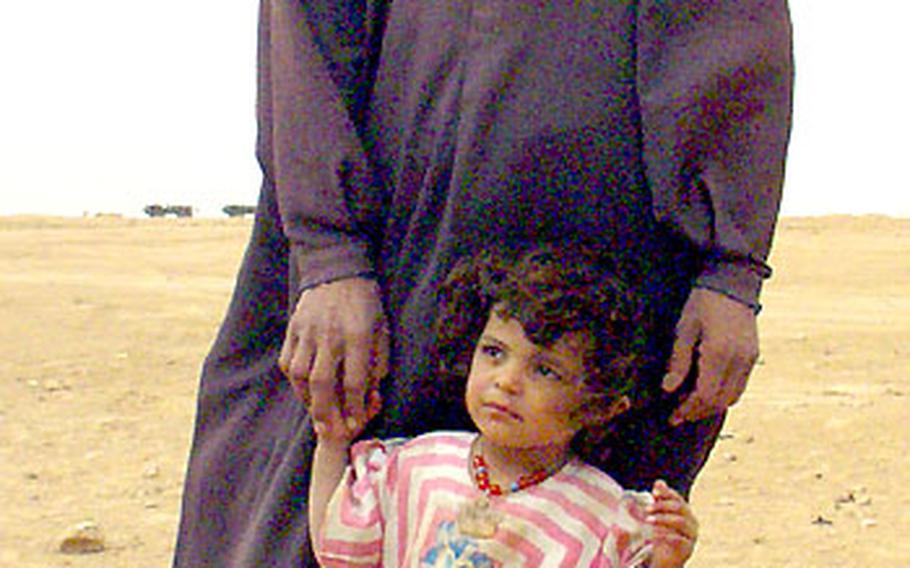 Hassan Abed with one of his daughters. (Steve Liewer / S&S) 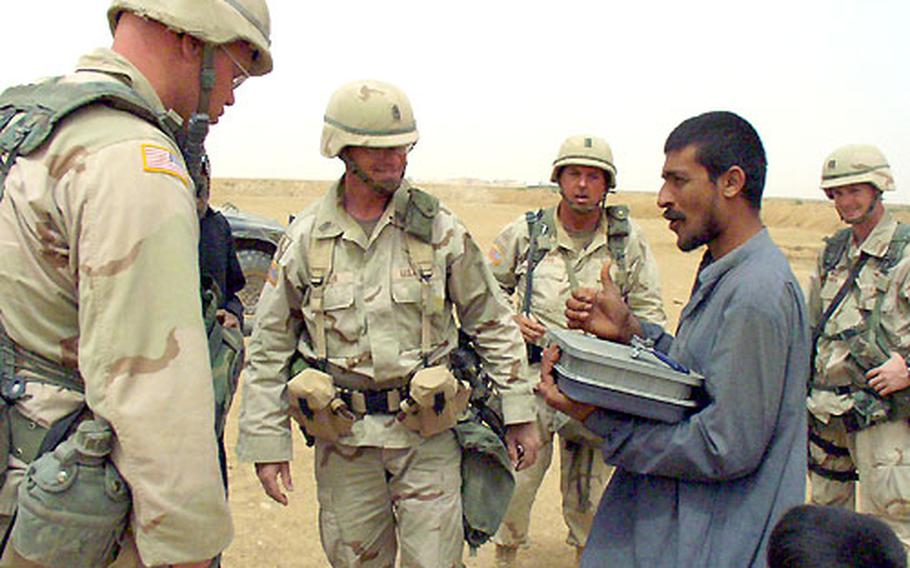 Hamed, a neighbor of the Abeds, and his young son thank soldiers from the 2nd Squadron, 6th Cavalry Regiment, for a gift of food brought from the U.S. Army aviation base camp nearby in central Iraq. The soldiers are, from right, Sgt. Aaron Haynes, 30, of Minot, N.D.; 1st Sgt. Michael Miller, 43, of Orlando, Fla.; 1st Sgt. Homer Yates, 46, of Portsmouth, Ohio; and Capt. Cory James, 26, of Brazoria, Texas. (Steve Liewer / S&S)

U.S. ARMY AVIATION BASE CAMP, Central Iraq &#8212; Hassan and Abbas Abed were thrilled and amazed a few Sundays ago, when dozens of AH-64 Apache helicopters swooped low over their farm fields a few miles from the city of An Najaf.

They could never have imagined the world&#8217;s most powerful fleet of attack helicopters would choose to park its aircraft among the fields where the Abed family grows grain and raises sheep.

Sand berms and concertina wire now separate them from part of their land where the U.S. Army set up shop for the war with Iraq.

Hassan and his family had to leave their homes to move in with Abbas&#8217;s family. Twenty-nine relatives now are crammed into a tiny windowless mud-brick home in the desert.

Yet these Iraqi farmers have endured the inconvenience with good cheer, greeting visitors from the 2nd Squadron, 6th Cavalry Regiment with smiles and waves.

&#8220;Bush OK! America OK!&#8221; they said enthusiastically last week when three Humvees of 2-6 Cavalry soldiers visited to bring food and water. When Saddam&#8217;s name came up, they would wipe their feet on the ground &#8212; a sign of disrespect in Muslim cultures &#8212; and make slashing gestures across their throats.

These neighbors don&#8217;t have much money, but their fields are well kept, and they dress neatly in colorful clothes. They impressed the handful of soldiers who visited them.

It is hard to pin down the details of the Abeds&#8217; story because none of them speaks English. But the 2-6 soldiers brought along as a translator Spc. Brandon Gullen, 21, of the 864th Engineer Battalion from Fort Lewis, Wash.

Growing up in Pittsburgh, Gullen taught himself some Arabic by reading the Quran and studying on the Internet. Through a combination of sign language and his basic Arabic, the soldiers were able to stitch together the outlines of the Abeds&#8217; story.

Hassan and Abbas, who both appear to be in their 30s, have more than a dozen children between them. Three years ago, they moved to the An Najaf area with their cousins, She&#8217;in and Hamed, who both are married and have several children as well.

They said they moved because the government pushed them off their farmland. The families moved here to try to stay out of Saddam Hussein&#8217;s way.

Outside of Abbas&#8217;s little house, where three of the families now live, is an outdoor stove, a small stream, an old tractor and a herd of sheep and goats. Two of the young girls and three black-and-white dogs escort the sheep and goats to the fields each day.

The Abeds have a well from which they can underground water nearly 400 feet below the desert. They use the water to irrigate their fields. The well, which is used by many families in the area, is on property that the Army has occupied. The Americans don&#8217;t let others use it, but they trust the Abeds enough to let them draw water.

On March 21, Iraqi soldiers came through the area and ordered the men to turn over their sons to serve in the army. Sarda and the two other teenagers were hiding in the fields. Hassan, Abbas, and their father, Abid, knew the boys would serve as cannon fodder against the oncoming Americans.

They told the soldiers that another army unit already had taken the boys away. The soldiers believed it, and left.

That&#8217;s why they didn&#8217;t mind when the Americans flew in with their Apaches and Black Hawks two days later. They didn&#8217;t want to get their hopes up, because the Americans backed off and left Saddam in power in 1991 after the Persian Gulf War, prompting reprisals against civilians in southern Iraq who had rebelled against Saddam&#8217;s rule.

Still, having the Army around made things feel safer. It looked like they would stay this time until Saddam was gone. Gingerly, they made friends with their strange new neighbors, selling bills with Saddam&#8217;s portrait and giving them large loaves of homemade pita bread.

On Friday, the soldiers took boxes of food to Abbas&#8217;s farm, then to Hamed&#8217;s a half-mile away. They posed for pictures with the men and children.

The veiled women stayed inside, following Muslim custom, though occasionally they peeked out at the visitors.

The visit made an impression on the soldiers, who have had no other chance to meet Iraqi civilians.

First Sgt. Michael Miller said he wished he could know the families would be taken care of after the Army goes away.