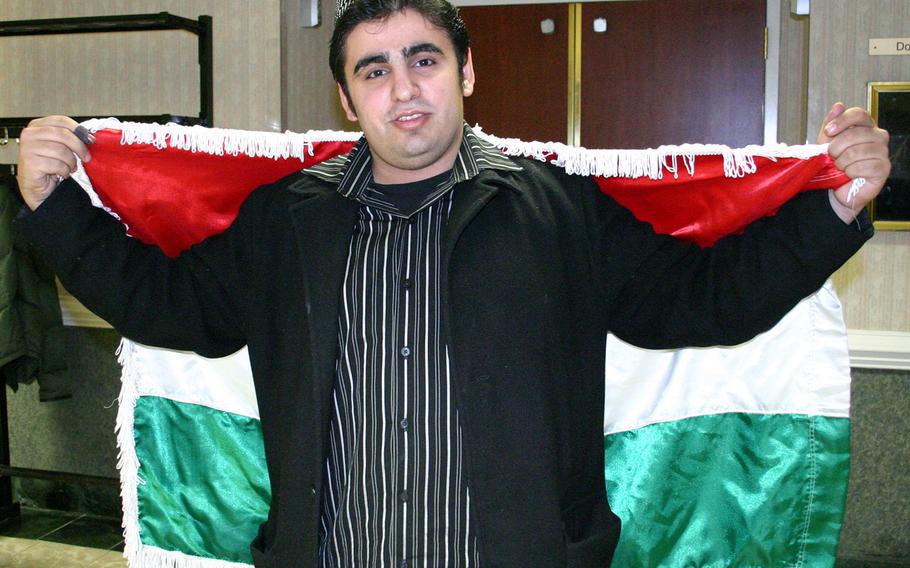 Buy Photo
Goran Rahim wears the flag of Kurdistan over his shoulders as he votes in the Iraqi election at McLean, Va., in 2005. (Joe Gromelski/Stars and Stripes)

Buy Photo
Goran Rahim wears the flag of Kurdistan over his shoulders as he votes in the Iraqi election at McLean, Va., in 2005. (Joe Gromelski/Stars and Stripes) 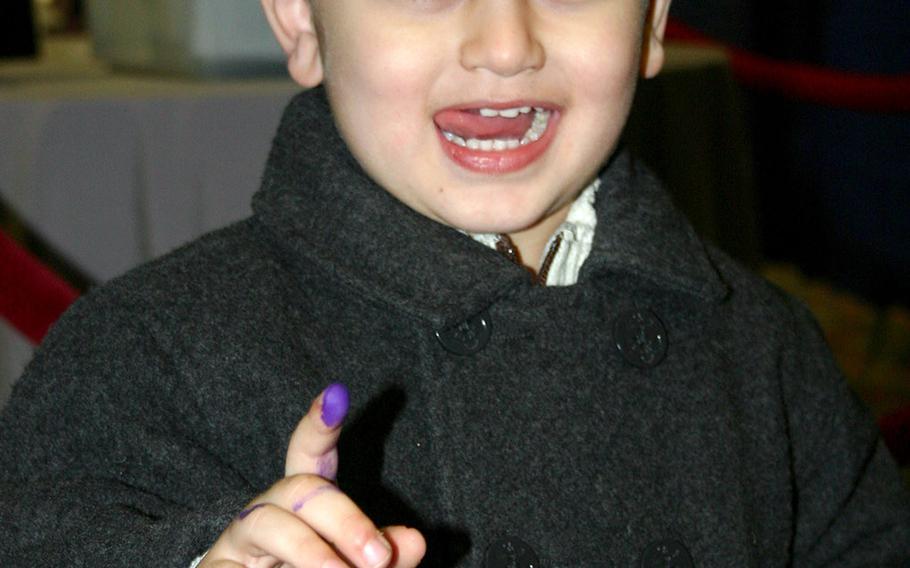 Buy Photo
Although he was way too young to vote in the 2005 Iraqi elections, three-year-old Mand Yousifi of Springfield, Va., was happy to be able to dip his finger in the purple ink that signifies having cast a ballot. (Joe Gromelski/Stars and Stripes) 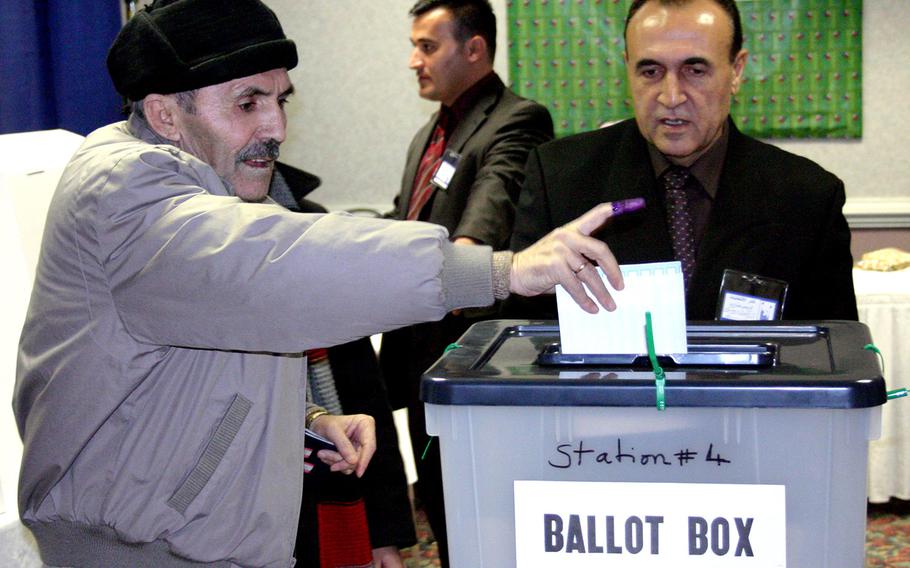 Buy Photo
His finger covered with the purple ink showing that he has voted, Chalid Moustaffa casts his ballot in the 2005 Iraqi election at McLean, Va. ( Joe Gromelski/Stars and Stripes) 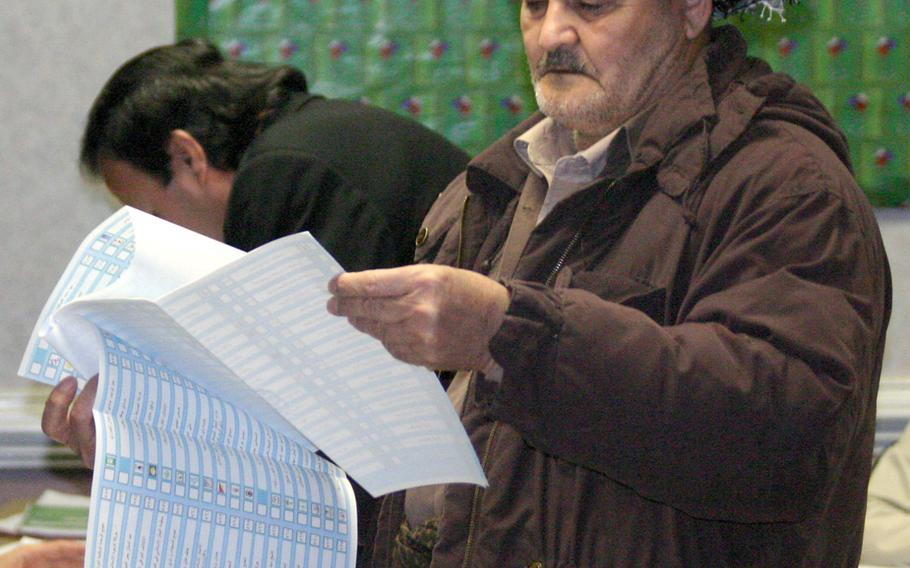 Buy Photo
Hama Peshdery looks over the list of 300 candidates on the ballot before casting his vote in the Iraqi election in 2005 at McLean, Va. (Joe Gromelski/Stars and Stripes) 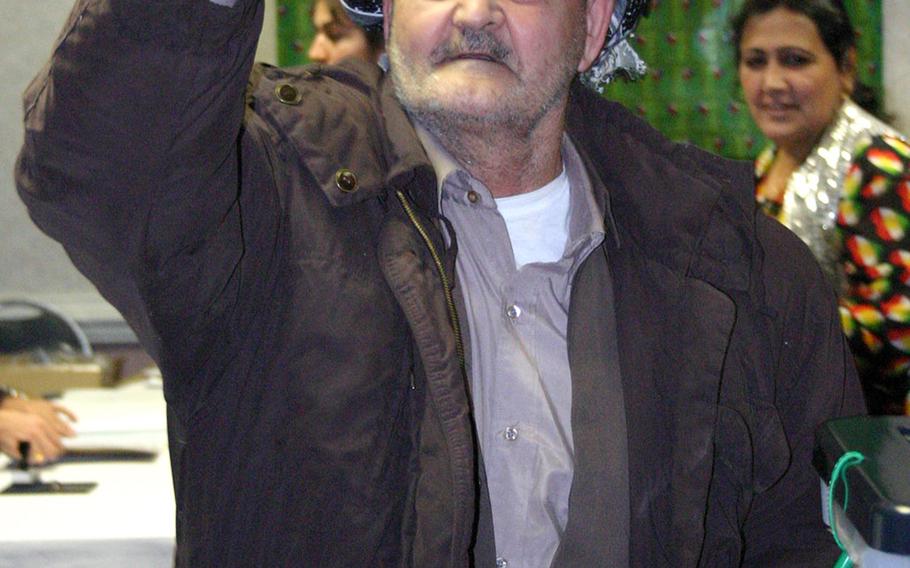 McLEAN, Va. — It’s cold and gray outside this generic Best Western hotel near Washington, but inside, it’s no ordinary Wednesday.

The special occasion is obvious by the way many Iraqi expatriates have chosen to dress to cast their vote for their first democratic parliament.

At noon in the crowded hotel lobby, suits, ties, and brilliantly polished shoes are the rule for older men, while the younger guys are wearing impeccable hip-hop, with spotless white sneakers and baggy layers.

Several women, meanwhile, have put aside their workaday dresses and headwear in favor of bright, floating, gauzy frocks most often seen at Iraq weddings.

The ethnic Kurds are particularly evident, some marked only by their distinctive black-and-white “klow” caps, while others choose the baggy tan trousers, overblouse, and colorful tribal sashes.

And everyone, it seems, has brought a camera so they can take photos of their friends and family holding up purple-dyed fingers.

In addition to his purple finger, Goran Rahim is wearing the flag of Kurdistan over his shoulders, flaring it out like wings for the cameras.

“I was 5 years old when I left Kirkuk,” fleeing Saddam Hussein’s campaign to stamp out Kurdish opposition.

“I spent nine years in a Pakistan refugee camp. So for me, America is a safe haven,” Rahim told Stripes.

But now, with democracy in sight, “I am here [voting] to support the Kurdish children,” he said. “I don’t want them to experience what I went through.”

Another Iraqi who left her country as a child, 26-year-old dentistry student Alia Allawi, said she is also optimistic that the voting will benefit her birthplace.

“I’m hoping this [election] is one step ahead for Iraq — two steps, actually, since we took the first step last time,” during the 2004 elections, said Allawi, who works for the Independent Electoral Commission of Iraq, the organization in charge of arranging elections for expatriate Iraqis.

This hotel is one of eight U.S. sites where Iraqis can cast remote ballots, Allawi said.

There are three sites in California, two in Michigan, one in Phoenix, and one in Illinois, Allawi said.

No one knows precisely how many Iraqis live in the United States, said Allawi, who also helped with the elections in 2004.

However, that site was “in the middle of nowhere,” not as centrally located as this McLean hotel.

“So we’re hoping to get a lot more,” Allawi said.

Not every voter was a fan of the U.S. effort in Iraq.

“I’m opposed to what the United States is doing in Iraq,” said Dunya, a 42-year-old Iraqi-American who came from Boston to vote.

“There are only two justifications for war: one is self-defense; and the other one is a UN Security Council Vote,” she told Stripes. “The U.S. thwarted that, and as a result, my family [in Iraq] and a lot of civilians are in daily risk of their lives.”

Dunya, who asked that her last name not be used “because I don’t want to be hassled any more than I am already hassled,” said that she had traveled to Iraq for the first time in the spring of 2004.

“I think it is hypocritical to call that ‘democracy,’ and I’m ashamed as an American,” Dunya said.

Had Saddam Hussein not been removed from power, Dunya said, “My family would be living under despotism, but not in danger.”

On Monday, the first day the poll here was open, about 800 voters came through, Allawi said.

The elections in the United States are a three-day affair, running through Dec. 15 in order to accommodate voters who travel long distances.

One of them is Hadi Sahar, a Shia from Baghdad who immigrated to Boston, Mass., four years ago.

In Iraq, Sahar was an X-ray technician, he told Stripes after casting his vote.

Unable to get similar work in Boston, he supports his family by working in a BJs store.

Despite tight finances, the entire Sahar family flew to Virginia to vote, including two cousins, his wife, two small children, and a niece.

Even with discount tickets, the trip cost the Sahar family more than $1,000, he said.

“The condition in my country is more important than the money,” Sahar said. “We have to work for my country, for my family there, for my nation.”

The slate of candidates includes more than 300 names.

Iraq’s new parliament will include the top 275 vote-getters, who will then elect a president and two vice-presidents, Allawi said.

The president will appoint a prime minister, who will select a cabinet and present it to the parliament, who must approve the slate by a simple majority vote.

Despite the size of the parliament, each voter “gets one check only,” for only a single candidate, Allawi said.

Even with a ballot that runs several pages in length, Iraqis aren’t confounded, Allawi said.

“They keep up with the situation in Iraq, and they know,” she said.

“Yes, I knew exactly who I was going to vote for before I came here,” Rahim agreed. “I did research, on the Internet and TV,” including the two Kurdish channels he gets by satellite.

From inside the voting room, applause echoed as families celebrated the historic occasion.

Yet in the lobby outside the voting room, many Iraqis tempered their pleasure at voting with concern for the future of their country.

The word key word in virtually every conversation was “hope.”

“I’m very happy” to vote, Sahar said. “I hope that after this election, everything will change. But I know it will take a few months, maybe more than a year” before the situation in Iraq calms, he said.

Another key to peace, besides democracy, Sahar said, is the death of Saddam Hussein.

“I think if they judge him [guilty] and hang him, everything will calm down,” he told Stripes.

Payman Muhamed, a young homemaker from Springfield, Va. whose husband works as a translator for the U.S. Army in Iraq, also used the “H” word.

“I hope that this [vote] will be good for the Iraqi people,” Muhamed said.

But at least in the short term, the U.S. military must stay in Iraq, she said.

“If they leave, there will be war.”

Rahim, the Kurd, also gave credit to the U.S. military in Iraq.

“Everything we are now, we are because of them,” Rahim said. “They’re my heroes.”