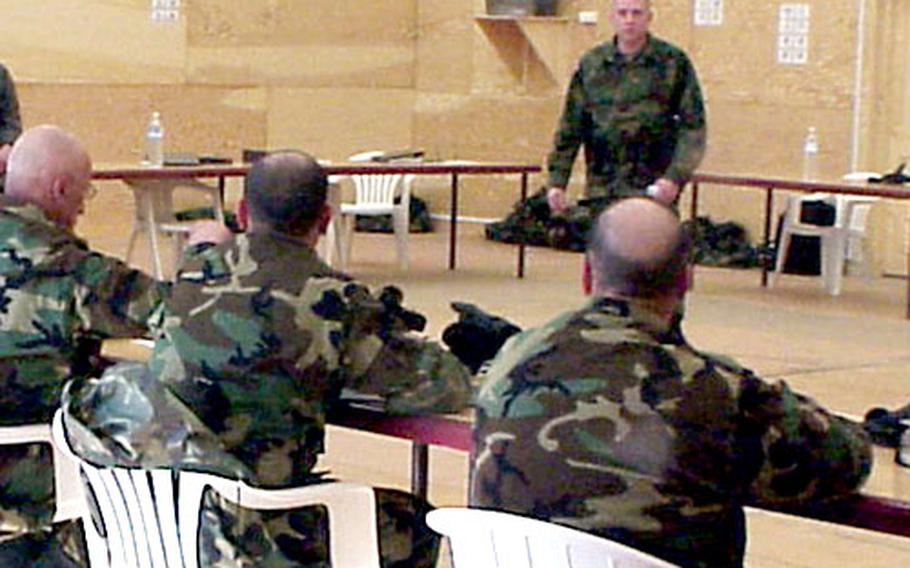 U.S. soldiers in Hungary have nearly completed training the second class of Iraqi dissidents that will work as translators and liaisons for coalition forces in Iraq.

The dissidents, who came from across the United States and Europe, have completed the first month-long training session and have been deployed to southwest Asia, said Army Maj. Robert Stern, spokesman for Training Task Force Warrior.

He would not specify where they had gone, only that it was within Central Command&#8217;s area of responsibility.

Essentially, the Iraqis, who come from various backgrounds, are receiving a condensed version of the Army&#8217;s civilian affairs training as well as being taught how to protect themselves, said Army Maj. John Murphy, one of the instructors.

The Iraqis will also be given 9 mm handguns and earn $1,500 a month, Stern said.

The training program is split into basic self-defense skills, and a second focusing on military civilian affairs operations.

Basic skills cover how to identify land mines, how to use protective gear in case of a nuclear, chemical or biological attack, first aid, understanding military rank and structure and the use of 9 mm handguns.

In the second phase, Iraqis learned how to coordinate between coalition forces and displaced persons, as well as how to work with humanitarian relief agencies like the Red Cross.

Most of the dissidents are in their late 30s, Stern said, some have doctorate degrees, others are businesses owners. Still others are younger and just entering the work force, he said. All are males.

The Iraqi National Congress, a major exile group outside of Iraq, provided the United States with a long list of names of exile candidates to assist with any invasion, including serving as communicators between allied forces and Iraqi civilians and troops.

Of the first group, only three dropped out, Stern said.

Stern would not go into specific numbers of trainers but said the military personnel came from 31 units and include both active-duty and Reserve forces.

&#8220;Many of the instructors are professional U.S. military instructors who train Army soldiers, and there are civil affairs instructors,&#8221; Stern said.

Murphy said the instructors are teaching dissidents to use common sense when they act as liaisons.

The training is being conducted at Taszar air base, about 120 miles southwest of Budapest, which the United States has leased since 1995.

It was a staging area for U.S. peacekeepers in the Balkans in the 1990s. Later it was a stopping place for morale trips offered to U.S. troops deployed in the Balkans, but in the past months those excursions were halted.

The United States has pledged to the Hungarians not to conduct combat training at the base.