U.S. and Iraqi special operations personnel help a kidnapping victim to his feet Monday. The hostage was found shackled to a steel bed in an apartment building east of Taji. (Monte Morin / S&S)

U.S. and Iraqi special operations personnel help a kidnapping victim to his feet Monday. The hostage was found shackled to a steel bed in an apartment building east of Taji. (Monte Morin / S&S) Soldiers cut the handcuffs from the hostage. (Monte Morin / S&S) 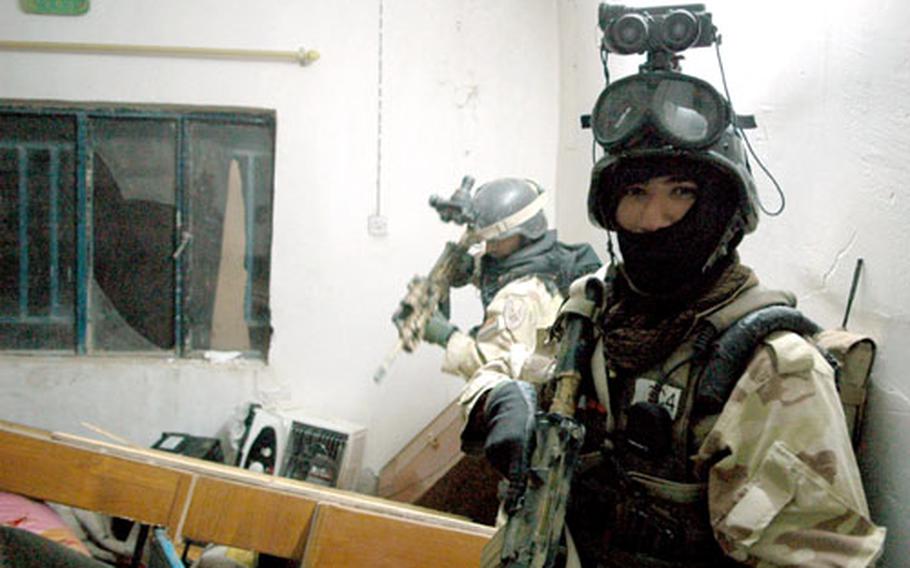 BAGHDAD &#8212; A retired government official who was kidnapped more than three days ago and beaten was rescued from captivity in dramatic fashion Monday by a little-known unit of Iraqi army counterterrorism soldiers trained by and modeled after the U.S. special operations forces.

The hostage, who was not identified by name, was found shackled to a steel bed in a dilapidated apartment building just east of Taji, about an hour north of Baghdad. Initial reports said that the hostage was a former Iraqi army brigadier general. However, that has not been confirmed by authorities.

&#8220;Jackpot!&#8221; American advisers shouted after members of the Iraqi Counter Terrorism Force, or ICTF, blew open the building&#8217;s front door and found the haggard and bruised hostage in a pitch-black, concrete room. The elderly man threw one free arm into the air and shouted for the Iraqis to free him as other members of the unit chased down and captured three of the suspected kidnappers.

As soldiers used a pair of bolt cutters to snip the handcuffs that bound the man&#8217;s left wrist to the bed frame, a U.S. Army Special Forces adviser said the rescue was a coup for the two-year-old unit.

&#8220;It&#8217;s not every day that you rescue someone,&#8221; said the Green Beret, who is one of a small number of Army Special Forces soldiers and Navy SEALs who train and supervise the ICTF.

In a nation known for violent and deadly kidnappings, the rescue of a living hostage is indeed rare. However, Iraqi officials and U.S. military advisers hope the ICTF will improve some hostages&#8217; odds of survival. The group, which falls under the 1st Iraqi Special Operations Forces Brigade, is trained and equipped as an elite force whose repertoire of skills includes rescuing hostages, sniper shooting, marine and river operations and scouting.

While the ICTF has participated in every major military action in Iraq since the 2004 siege of Fallujah, it is not well known among Iraqis, to say nothing of Americans. Part of this anonymity is because, like the U.S. Special Operations Forces, the ICTF is reluctant to be photographed or identified in the media, fearing that members will be targeted for assassination by insurgents. U.S. advisers say that at least two ICTF soldiers were killed after their pictures appeared in newspapers.

Another reason for its low profile is that up until recently, a portion of ICTF training was conducted in Jordan and not Iraq. Now that U.S. advisers believe that security in Iraq has progressed to the point where they can adequately screen and train recruits, the three-month-long school was moved to Iraq this month.

The ICTF, which is outfitted with state-of-the-art military equipment, wears a uniform entirely different from the Iraqi army&#8217;s famous &#8220;chocolate chip&#8221; camouflage pattern fatigues and is better equipped than most U.S. Army units.

While Iraqi army soldiers are armed with AK-47 assault rifles, ICTF soldiers carry M-4 carbines. They are also equipped with night-vision goggles, which allows them to drive their modified Humvee gun trucks to some missions with their headlights blacked out.

The unit is designed to act quickly on tips and information, and such was the case Monday when ICTF soldiers learned of the kidnapping victim and his possible whereabouts. While regular Iraqi army units will spend days and weeks planning an operation, ICTF soldiers were storming the kidnappers&#8217; hideout before the end of the day.

Wearing a variety of knit face masks and Arab head coverings, unit members and U.S. advisers drove with their lights out into a town heavily decorated with posters of Shiite clerics and religious icons. The trucks plowed through foot-deep lakes of sewage runoff and garbage as they navigated the city streets.

Within 10 minutes of reaching the building&#8217;s front entrance and triggering a door-shattering explosive, the soldiers had cleared the building and found the prisoner. A Stars and Stripes reporter was given permission to accompany soldiers during the raid, on the condition that he did not identify U.S. and Iraqi soldiers by name, or photograph them in a way their identities could be determined.

Since their training and the missions they are asked to execute are more complicated and difficult than regular Iraqi army troops, ICTF soldiers are paid slightly more than regular army soldiers.

U.S. advisers say that instances of desertion are rare, and far below what the regular army sees. They said this was not so much a matter of extra pay, but comes from the fact that the unit represents the demographics of Iraq as a whole. While regular Iraqi army units are more regional &#8212; units will usually have a majority of one particular ethnic group &#8212; this is not the case with the ICTF. In fact, U.S. advisers said, they were trained to look beyond religious and ethnic differences and view their fellow soldiers as an elite force whose members were dependent on each other for survival.

An Iraqi ICTF captain said this was indeed the case with his men.