Iraqi cops take the lead, with a little help 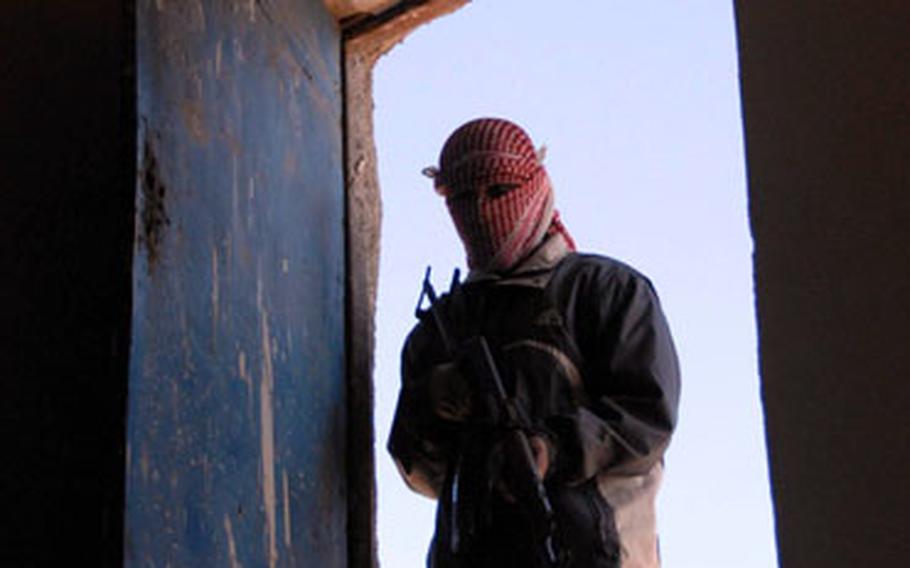 An Iraqi policeman searches a home suspected to be a base of operations for insurgents. Like most of the Albu Faraj officers, he wears a scarf to hid his identity for safety reasons. Iraqi Border Police Col. Yousef Tariq, who is represents police officers in Jazeera where Albu Faraj is located, said he is against the practice of concealing identities, but added that as places become more secure the police officers feel more comfortable to reveal who they are. "Slowly but surely we&#39;ll get to where we want to be," he said. (Megan McCloskey / S&S)

An Iraqi policeman searches a home suspected to be a base of operations for insurgents. Like most of the Albu Faraj officers, he wears a scarf to hid his identity for safety reasons. Iraqi Border Police Col. Yousef Tariq, who is represents police officers in Jazeera where Albu Faraj is located, said he is against the practice of concealing identities, but added that as places become more secure the police officers feel more comfortable to reveal who they are. "Slowly but surely we&#39;ll get to where we want to be," he said. (Megan McCloskey / S&S) 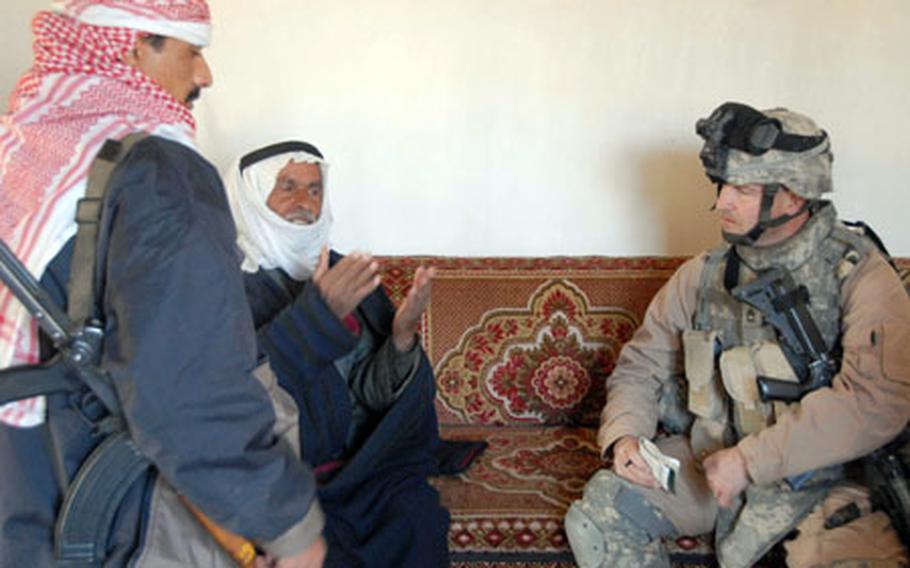 Sgt. 1st Class Timothy Leighty, 42, of Kansas City, talks with a homeowner in Albu Faraj about the weapons he had lied about having in the house. Leighty wanted to detain the man, but the Iraqi police, who were leading the neighborhood patrol, said the man wasn&#39;t causing trouble and could stay in the neighborhood. (Megan McCloskey / S&S) 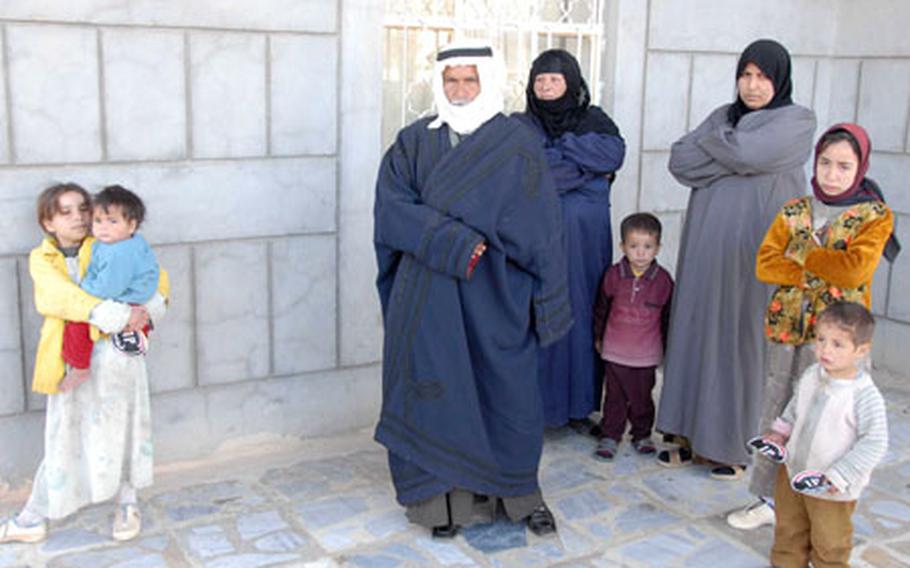 A disgruntled family - the children clutching Iraqi Police stickers given to them earlier, wearily watches Iraqi police and soldiers leave their house after having their weapons confiscated. The man lied about having weapons, and when the police discovered them he said he found them in the trash. He was almost detained by the American forces, but the Iraqi police said he could stay in the neighborhood. (Megan McCloskey / S&S) 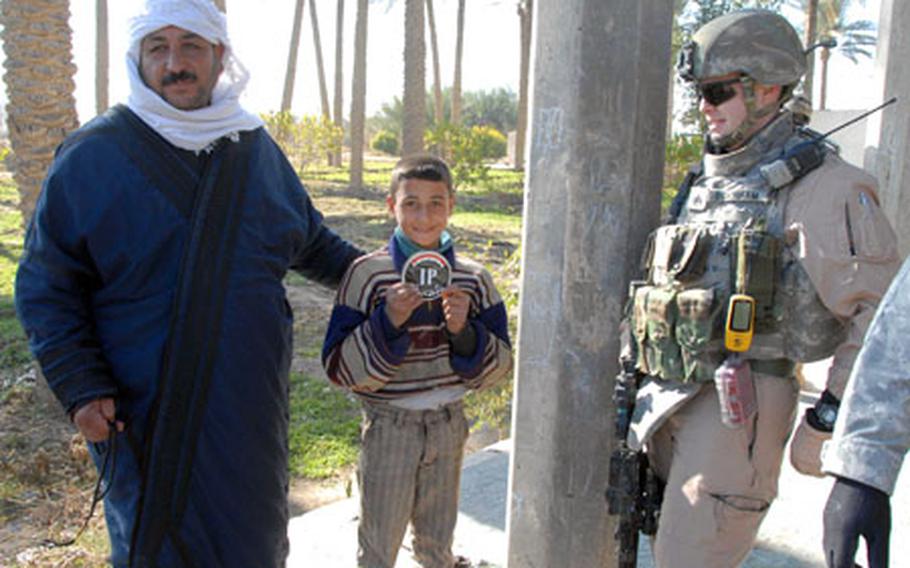 A local Albu Faraj child holds up the Iraqi Police sticker given to him by Sgt. Stephen Burnham, 30, of the 9th Psychological Operations Battalion out of Fort Bragg, NC. Burnham, who is assigned to Task Force 2-37, went on the patrol with the Iraqi police to assess how the locals feel about the police. The man showed Burnham where the insurgents shot at his house, hitting his car. (Megan McCloskey / S&S) 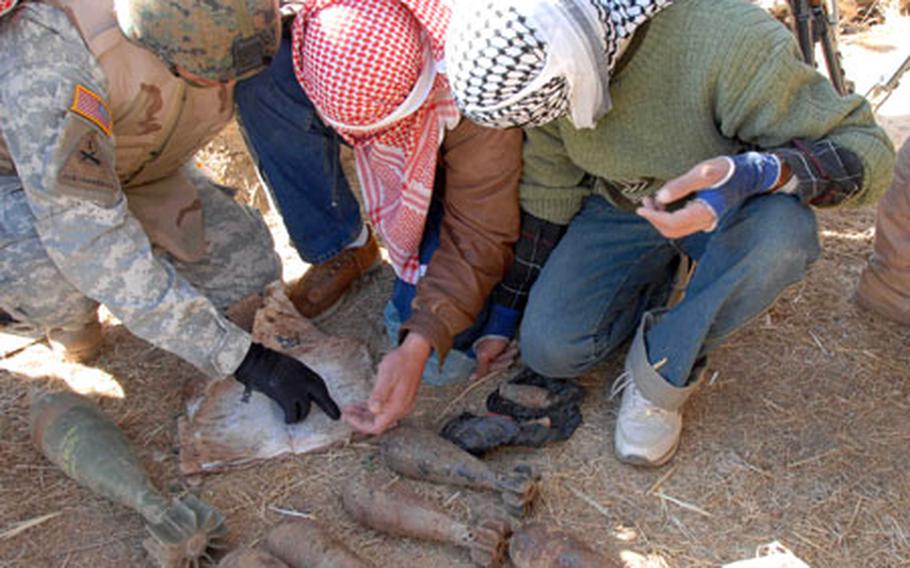 An Iraqi translator working for the Army and Iraqi policemen read a ragged, water-damaged insurgent notebook found stashed with a weapons cache during an Iraqi police patrol in Albu Faraj. The notebook contains an inventory list, positions for roadside bomb emplacement and names of insurgents. About 10 mortars along with TNT in plastic bags with a detonator cord and boxes of ammunition were found in the cache. (Megan McCloskey / S&S)

ALBU FARAJ, Iraq &#8212; In a way, the soldiers who live, eat and work at the Albu Faraj Iraqi police station are like older brothers to the newly minted policemen.

The Police Transition Team is there for guidance &#8212; to back up the Iraqis and teach them a few things. And much like a younger brother hanging out with his older, more experienced sibling, the policemen want to prove themselves to the soldiers.

The ultimate goal being, for both parties, a functioning, independent police force.

As sheiks join together with coalition forces to fight insurgents in Jazeera, which is just across the Euphrates from Ramadi proper, Iraqi police stations get set up in the tribal neighborhoods, complete with transition teams to help the police get started.

At Albu Faraj, the team is originally an artillery platoon with Task Force 2-37.

When the 2nd Battalion, 37th Armor Regiment, 1st Armored Division moved from Tal Afar to Ramadi in October, the platoon became police advisers and moved into the old stone house that is the station.

The soldiers live in two rooms, one upstairs and one down, crammed with bunk beds. The living conditions are sparse, cold and fairly dark. But the upstairs room has a large television hooked up to a satellite.

Piled next to the fridge are stacks of Gatorade and juice boxes, and they often microwave mini frozen pizzas for lunch. They can get take-out dinners down the street at Forward Operating Base Blue Diamond.

Last week, in the hallway outside the soldiers&#8217; room upstairs, an Iraqi police lieutenant was angrily talking to a policeman whose pistol wasn&#8217;t working. The lieutenant wanted to fire him.

Sgt. Jason Taylor, 28, had to intercede. He showed the lieutenant that the gun had just malfunctioned and explained it happened every once in a while with that type of pistol.

Also in the curriculum: how to fill out police reports and have an efficient filing system.

When not on patrol, the police transition team often becomes the complaint department.

The colonel of the Albu Faraj station goes to 1st Lt. Victor Somnuck, 24, of Miami, who heads up the transition team, with his gripes about pay, ammunition and supplies.

Before getting paid for the first time four months after the station opened, the police officers would hound the soldiers.

Before going on a patrol, the police check in with the soldiers, showing them on the map where they&#8217;ll be. Some of the soldiers accompany them to provide security and guidance &#8212; but the Iraqis take the lead.

&#8220;The community would rather see them lead than coalition forces,&#8221; Taylor said.

On a recent patrol, the police and the soldiers searched a house and questioned the owner, who lied about how many weapons he had. The soldiers&#8217; first instinct was to detain the man, but the Iraqi police said he wasn&#8217;t causing any trouble in the neighborhood

So the officers just confiscated the man&#8217;s weapons instead.

The Iraqis know the culture, the customs, who belongs and who doesn&#8217;t, said Lt. Col. John Tien, commanding officer of the task force, which is out of Giessen and Friedberg, Germany.

During the patrol the police found a weapons cache hidden under hay in little huts near a large field where cows graze. It was filled with mortars, TNT and boxes of ammunition.

When an Iraqi police lieutenant came into the room, a smiling Somnuck congratulated him on the cache find and then proudly gave him a high five.

ALBU FARAJ, Iraq &#8212; Out on patrol earlier this month with the Albu Faraj police, Sgt. Stephen Burnham was handing out Iraqi police stickers to children and chatting up the adults.

His job with Task Force 2-37 is to assess how Iraqis feel about the police and coalition forces and promote the successes in the area.

At one point during the patrol, an Iraqi man showed Burnham where insurgents, hiding across the river, had shot at his house and hit his car. The area on the porch that was fired on is normally where his children play, he told Burnham.

Burnham used the opportunity to talk with the man about the insurgents&#8217; motives.

Burnham said he was going to have an interpreter record a message to play over the speakers of the Humvee, promoting the police confiscation of more illegal weapons that day.

Burnham spent a lot of his time during the patrol interacting with the children, giving them round stickers that said IP for Iraqi Police.