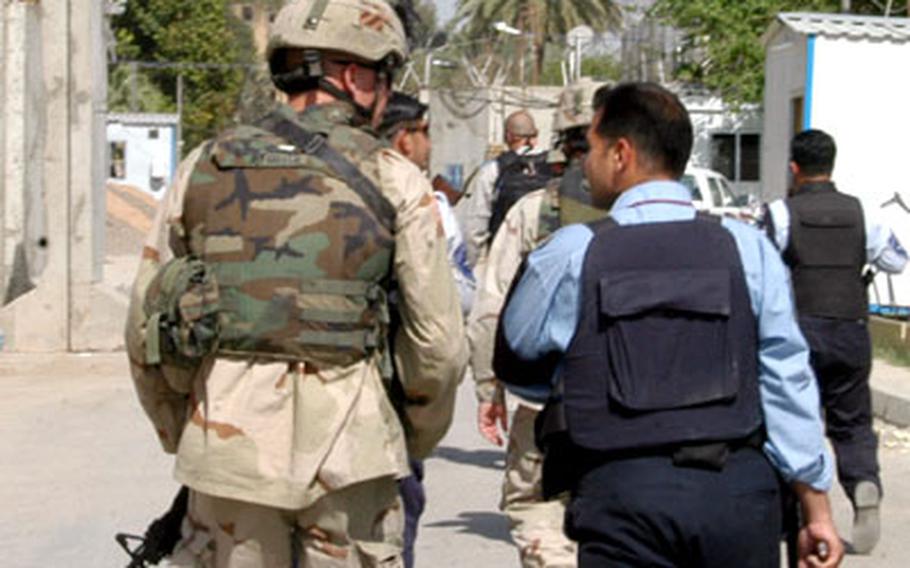 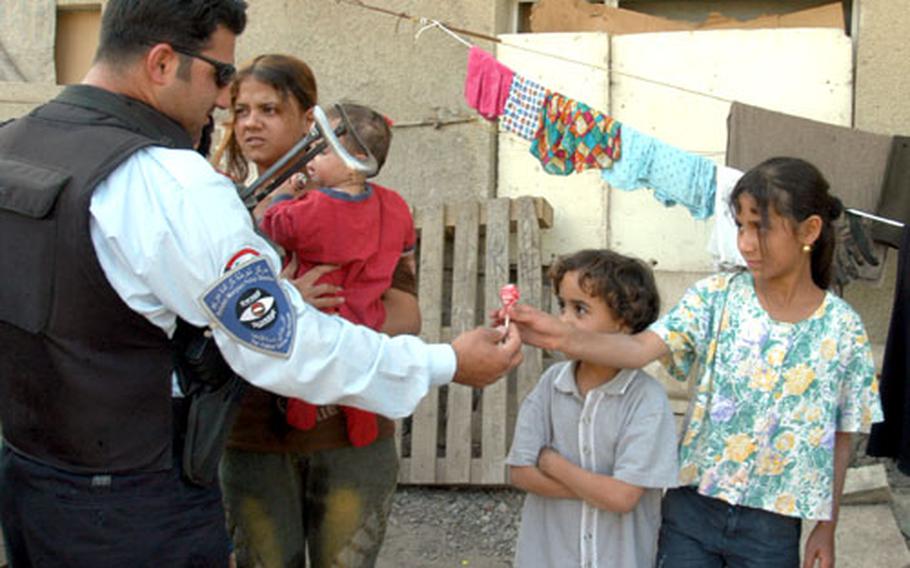 Iraqi policeman Mnieer, 24, hands out Blow Pop lollipops to children living in a run-down amphitheater inside Baghdad&#39;s International Zone. He said community policing is needed to gain trust of the community, a foreign concept to most Iraqis. (Sandra Jontz / S&S) 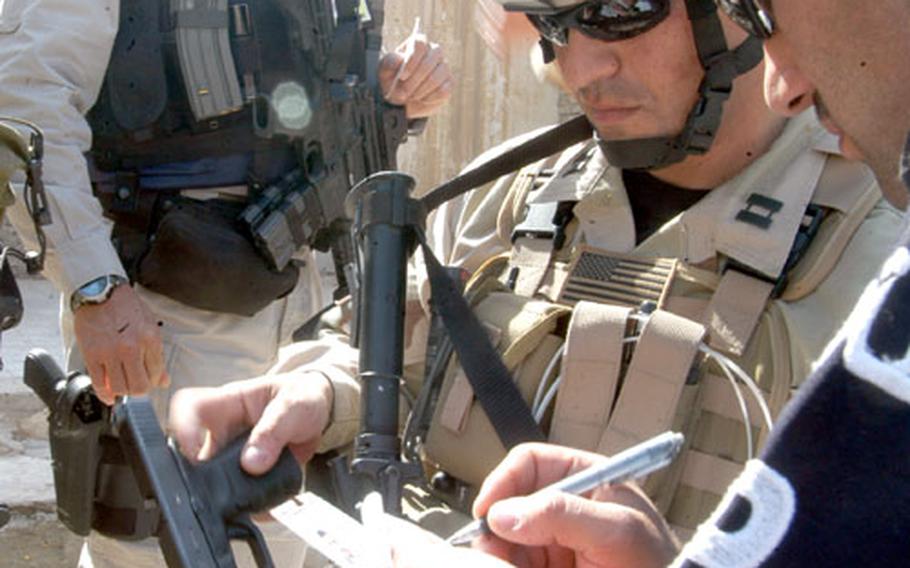 Capt. Thomas Venable, 36, a law enforcement advisor under the Joint Area Support Group in Baghdad, helps an Iraqi policeman record a handgun, confiscated Tuesday from a man who did not have the proper paperwork to carry the weapon. (Sandra Jontz / S&S)

But the young police officer said he sees a dire need to help protect his country, and the spate of insurgent threats and terrorist bombings that has killed hundreds of his brethren won&#8217;t dissuade him.

&#8220;We have a good system and we&#8217;re taking care of the country,&#8221; Mnieer, who requested his full name not be used for security reasons, said of being a police officer assigned to the International Zone, or IZ, station.

Under a program set up by the U.S.-led Civilian Police Assistance Training Team, the IZ facility will serve as the &#8220;model station&#8221; for Iraq&#8217;s police force, officials said. The training team is responsible for organizing, training, equipping and mentoring the entire Iraqi police force.

The International Zone, also called the Green Zone, is home to the U.S. Embassy and key military planners and operators. But within the confines of the concertina wire, concrete walls and manned checkpoints, live between 7,000 and 10,000 Iraqis. The IZ police station responds to burglaries, robberies, assaults and corruption schemes, said Paul Boothe, the advisory team leader and a police officer in McKinney, Texas.

The Iraqi police, referred to as IPs, are learning the concept of &#8220;community policing,&#8221; getting out of the office and hitting the streets. Advisers want to quell the long-practiced police habit of sitting around the station and waiting for complaints to come to them.

Six days a week, the IPs conduct joint patrols with the U.S. military, walking narrow alleys and littered streets and checking out abandoned buildings, both looking for trouble and connecting with the community. Soon, they&#8217;ll begin enforcing traffic laws with U.S. military police.

A 23-year-old Iraqi mother of two said she and her family refuse to leave the security of the IZ. Her husband is an Iraqi working for the U.S.-led coalition, and could be killed for his work, she said through a translator.

&#8220;We feel secure and see the IP and they ask about our problems,&#8221; said the woman, who added that she would rather live in a dilapidated building inside the boundaries rather than seek a home outside the Green Zone.

A crumbling amphitheater within the zone is &#8220;home&#8221; to about 200 squatters, who also refuse to leave the security afforded them by living in the fortified zone. But that means living in squalor and stench, with no running water, bathrooms or hygienic places to dump their garbage.

One challenge is getting the police to show up for work.

Advisers grapple with an attendance problem that reaches from the station captain on down to the lowest of subordinate forces, Boothe said.

Culturally, he said, Iraq is a place where being on time isn&#8217;t of the essence. It might be a running joke that &#8220;Iraqi time&#8221; means adding two hours to an appointed time, but it has proven problematic, Boothe said.

&#8220;And the Iraqi police [under Saddam Hussein] have a history of corruption and being abusive,&#8221; Boothe said. &#8220;Our goal is to remove that taint of history. From what we gather, the [residents] are gaining faith in the system.&#8221;