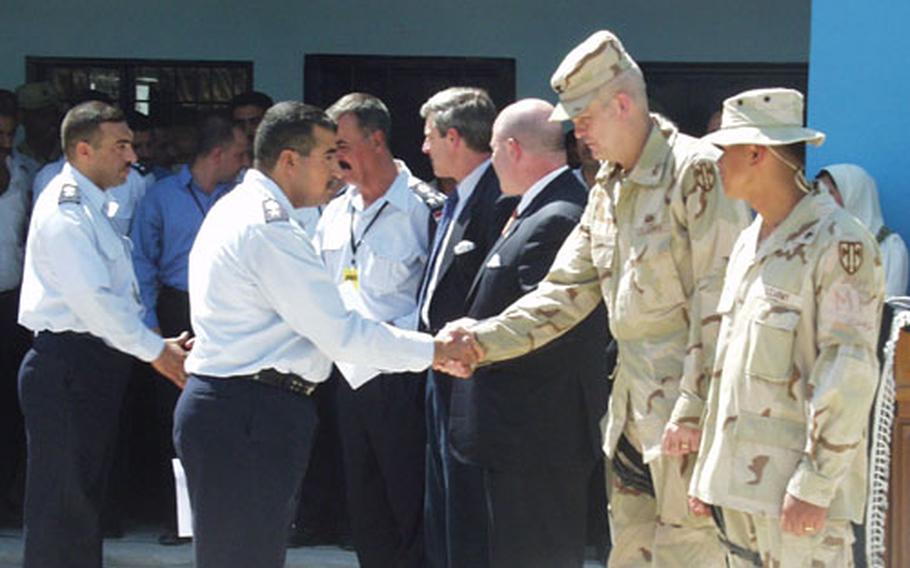 An Iraqi policeman gets a congratulatory handshake Wednesday from Col. Teddy Spain, the commander of the 18th Military Police Brigade based in Mannheim, Germany. The ceremony marked graduation day for the first class from Baghdad&#39;s police academy that received training from military police. (Kent Harris / S&S)

BAGHDAD, Iraq &#8212; Iraqi policemen have been learning the techniques of their jobs, from handcuffing to patrolling. But the toughest lesson facing them might be learning to win the trust of the Iraqi people.

Ninety-six Iraqi policemen on Wednesday rejoined the force protecting the streets of the country&#8217;s largest city. They had completed a three-week course conducted by U.S. forces and designed to teach them methods and procedures used by police officers in America.

Among those attending the graduation were the commanders of each of the respective forces, as well as L. Paul Bremer, chief administrator for the Coalition Provisional Authority.

Everyone who took the podium on a scorching afternoon at the city&#8217;s police academy had something good to say about the event.

&#8220;Police in every country have a very important piece to play,&#8221; Bremer said. &#8220;In Iraq &#8230; emerging from decades of military rule, the peace is crucial. You must overcome the distrust of the Iraqi people to officials and institutions of the state.&#8221;

Col. Teddy Spain, who commands the 5,100 military police in central and northern Iraq attached to his Mannheim, Germany-based 18th Military Police Brigade, praised the 33 military policemen who conducted the training. The 382nd MP detachment is made up of reservists from San Diego.

That program, according to the detachment commander, Capt. Jason Brandt, involved mostly classroom work. The Iraqi policemen, who had all served as policemen under Saddam Hussein&#8217;s regime, studied 38 subjects, ranging from interviewing and handcuffing suspects to police ethics and patrol procedures.

Seven people who entered the training didn&#8217;t complete the course.

&#8220;The biggest challenge was probably the variety of training of the police in the course,&#8221; he said. For some, everything was new. For others, it was basically a refresher.

The 382nd has another, larger class it will start training soon, and Brandt expects to train several more classes before civilian contractors take over.

Spain said civilian contractors were supposed to teach the classes from the start. But when that didn&#8217;t work, he selected members of the 382nd, then new arrivals in Baghdad.

Adapting material from the State Department that has been used to train police in dozens of countries, the MPs went to work.

Brandt said the experience has been valuable for his unit, because it gives soldiers an opportunity to lead large groups in exercises and &#8220;keeps us current on our own law enforcement skills.&#8221;

He said he believes the Iraqi policemen can gain the confidence of their people if they take the lessons to heart. Police in Saddam&#8217;s regime were largely asked to play different roles than they&#8217;re expected to now.

Spain said the military policemen stationed around the country would all contribute to that change. He said many of his troops are stationed at Iraqi police stations and conduct joint patrols to demonstrate U.S. police techniques every day.