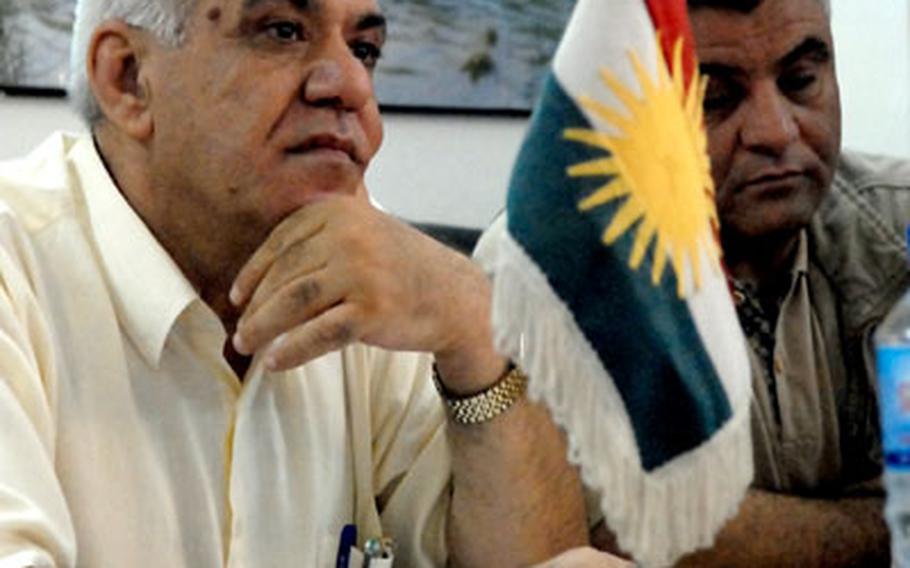 Samir Mohammad Noor, head of the city council in Khaniqin, Iraq, is seated next to a Kurdistan flag during a meeting Wednesday. Khaniqin is in Arab-dominated Diyala province, but most residents hope to some day join the Kurdistan Regional Government, which has created tensions with Diyala. The city council had an Iraqi flag, but it was about an inch shorter than the Kurdistan flag. (James Warden / S&S)

Samir Mohammad Noor, head of the city council in Khaniqin, Iraq, is seated next to a Kurdistan flag during a meeting Wednesday. Khaniqin is in Arab-dominated Diyala province, but most residents hope to some day join the Kurdistan Regional Government, which has created tensions with Diyala. The city council had an Iraqi flag, but it was about an inch shorter than the Kurdistan flag. (James Warden / S&S) 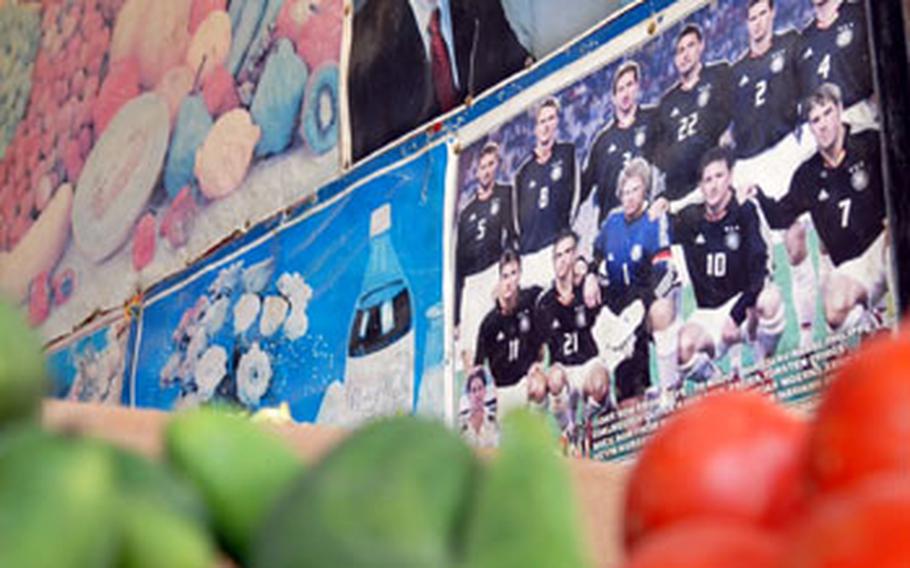 A photo of Iraqi President Jalal Talabani and Kurdistan Regional Government President Masoud Barzani hangs next to advertisements and posters of famous soccer teams Wednesday at a vegetable store in Khaniqin, Iraq. Photos of the two Kurdish leaders are plastered across the area’s shops and government buildings, while the faces of Arab leaders like Prime Minister Nouri al-Maliki are entirely absent. (James Warden / S&S) 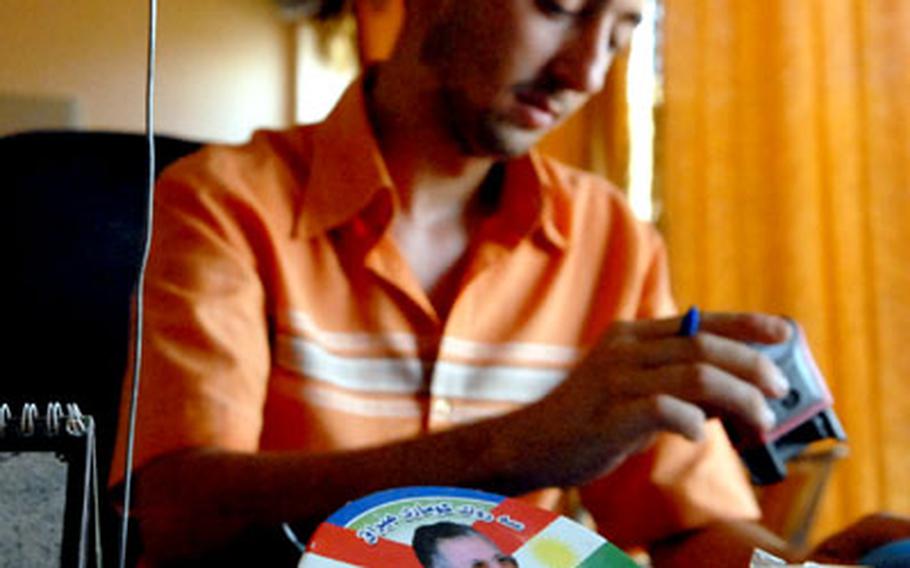 A picture of Iraqi President Jalal Talabani, a Kurd, sits on a desk Wednesday while Karwan Abdullah stamps bills at the Khaniqin, Iraq, restaurant where he works. (James Warden / S&S)

Kurdish flags fly over public buildings and adorn store walls and taxi cabs, while Iraqi flags are all but invisible. Pictures of Kurdish leaders are in every government office. Naturally, Kurdish is the lingua franca.

Such trappings aren&#8217;t unusual in the Kurdistan Regional Government, as Iraq&#8217;s autonomous Kurdish provinces are called. But Khaniqin isn&#8217;t in Kurdistan. It&#8217;s ostensibly part of the Arab-dominated Diyala province. Residents here make no secret of their desire to join Kurdistan, prompting Diyala authorities to cut off its support until they know for sure whether the outlying city will stay in the province.

"I&#8217;ve been hired for four years, and Baqouba never supported me for one penny," said Khaniqin Mayor Mohammad Mullah Hussein. "The Iraqi government is rich. They have the money, [but] nobody supports us."

Khaniqin is one of about a dozen "disputed internal boundaries" that are up for grabs while Arabs and Kurds try to nail down the so-called green line that divides their parts of Iraq. Kirkuk is the most well known of these areas. But that oil-rich city has its own provincial authorities to ensure money continues to flow into its coffers while the issue is negotiated. Khaniqin is at the mercy of Diyala officials, many of whom see no need to invest in a place that is on its way out.

Deciding that boundary could take years, though. A State Department official previously estimated that Iraq could be three years from formalizing it.

The issue figured prominently in last week&#8217;s discussion of an Iraqi elections law. President Jalal Talabani, a Kurd, vetoed the election law because the Kurdish parties didn&#8217;t like the way it addressed the boundary issue.

Experts now think elections will be pushed into 2009, and no one knows when the boundary referendum will go to voters.

Meanwhile, Khaniqin leaders continue to skirmish with Diyala province officials over money, even though the province has already figured the city into its budget.

"If they&#8217;re not going to Kurdistan now, we need to get Diyala to support Khaniqin," said Staff Sgt. Dave Schlicher, a soldier with 407th Civil Affairs Battalion and the head of the team responsible for Khaniqin.

The situation isn&#8217;t helped by the refusal of Khaniqin officials to talk with Diyala. American civil affairs soldiers are pushing city leaders to travel down to Baqouba to discuss the problems with the provincial council.

"Without at least playing a little bit with Diyala, we can&#8217;t make that happen," Schlicher said.

But Hussein, the mayor, has so far been unmoved: "You have to go to Baqouba for the meetings, and I&#8217;m not going."

Residents from the mayor on down complain constantly about Diyala&#8217;s neglect, but the city is actually better off than most of its southern neighbors thanks to Kurdish money. The Kurdish provinces and the Patriotic Union of Kurdistan, Talabani&#8217;s political party, pay many of Khaniqin&#8217;s bills. The PUK even has a large office building in the city.

Kurdish money paid for dozens of new two-story homes for Kurds returning to the area after they were evicted during the previous regime&#8217;s "Arabization" campaign. Streets are clean and wide. And workers are building a shopping center the length of a city block.

"Pretty much, they get all their support from Kurdistan," Schlicher said. "That&#8217;s how the mayor&#8217;s been able to do so much with so little."

By contrast, Balad Ruz, southwest of Khaniqin, is happy just to have its market going. That city has also been the victim of Baqouba&#8217;s neglect even though it is predominantly Arab. Government money in Iraq is funneled through the larger cities, and it is common across the country for large cities to ignore their outlying villages.

"Everyone&#8217;s in the same boat," Schlicher said. "Everything stops at Diyala and nothing comes out."

Civil affairs officers visited the city&#8217;s jail Wednesday to check on a deputy oil minister whom the Kurds had arrested, perhaps illegally. The man insisted that the local judge was acting improperly and asked for the case to be reviewed by the head judge in the neighboring Kurdish province of Sulaymaniyah. The U.S. officers patiently explained that the case would actually be heard by Diyala&#8217;s judge because Khaniqin is in that province.

One of the officers visited Khaniqin&#8217;s judge, though, and the jurist said he, too, thought the Sulaymaniyah court should hear the case &#8212; and then added almost innocently that Khaniqin&#8217;s court doesn&#8217;t actually recognize Iraqi law. The officers concluded that this was a discussion better suited for the State Department&#8217;s Provincial Reconstruction Team.

Residents say it&#8217;s natural to look to Kurdistan for governance, mostly because the population has historically been Kurdish. Achmet Mohammad Hussein, a cigarette salesman, noted that Kurdish forces already provide security for the area. Diyala&#8217;s neglect is pushing them even further in that direction.

"The people in Khaniqin, 99.9 percent want to go to Kurdistan because they&#8217;ve gotten a lot of support from the Kurdistan government, not Diyala," said Jassim Mohammad Rahman, a general store owner in one of Khaniqin&#8217;s markets. "We don&#8217;t hate the Iraqi flag; we like it. But we like the Kurdish government better than the Iraqi government."

The city is about 85 percent Kurdish, according to a 2008 census. But the city council has a mix of Shiite and Sunni Arabs, Turkmen, Islamists, women and even a communist. Meetings are lively but peaceful, and the council members have no problem sitting down to eat together afterward.