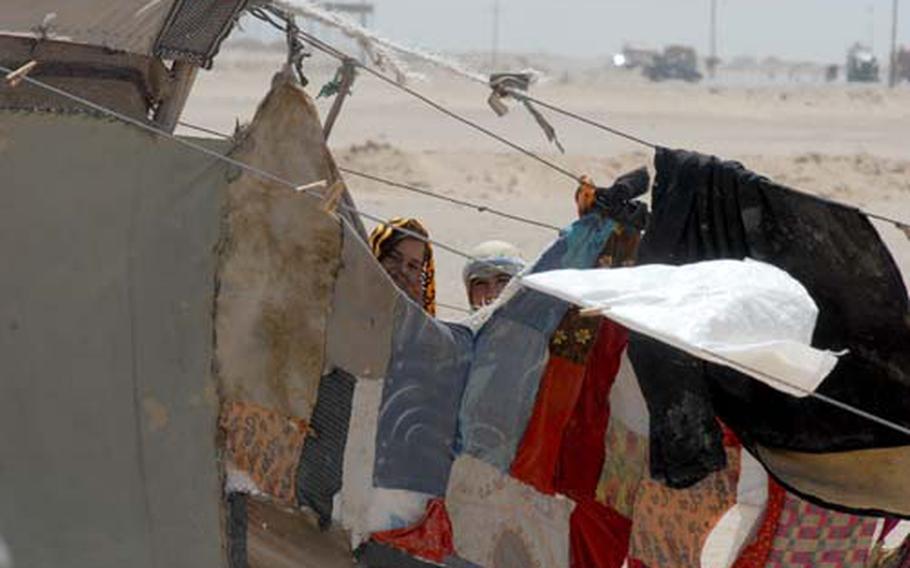 Curious Bedouin girls peer out of a tent at American soldiers who visited their camp near Karbala, Iraq on Saturday. (Seth Robson / S&S)

Curious Bedouin girls peer out of a tent at American soldiers who visited their camp near Karbala, Iraq on Saturday. (Seth Robson / S&S) 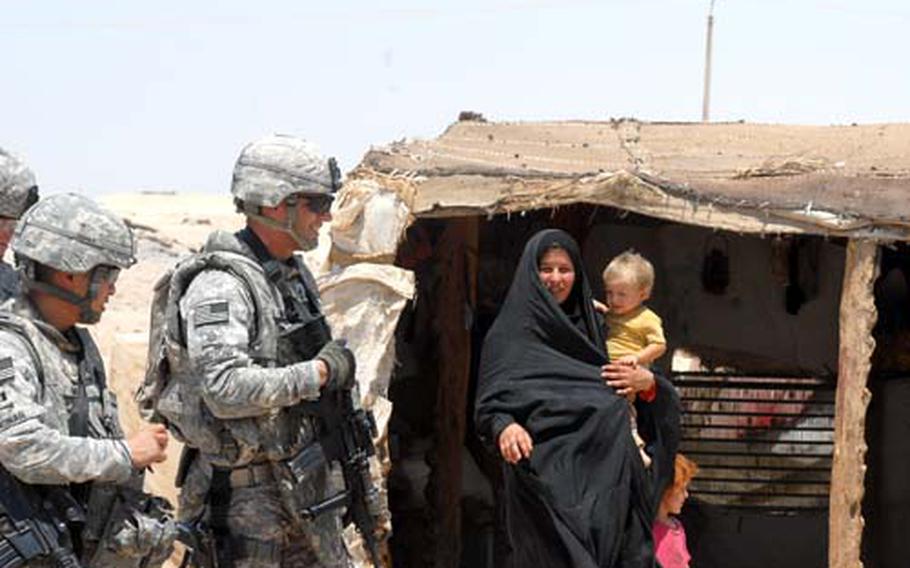 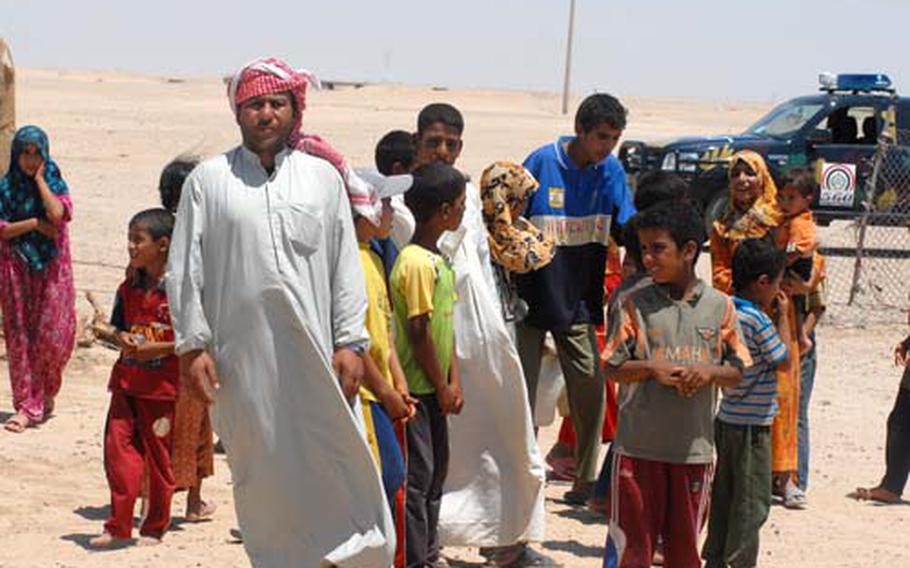 Bedouin Sahd Abd Zued (with red and white head scarf) is one of the few adult males who stays in this Bedouin camp, near Karbala, during the day. The others travel into town to work as laborers while the women and children look after their sheep. (Seth Robson / S&S) 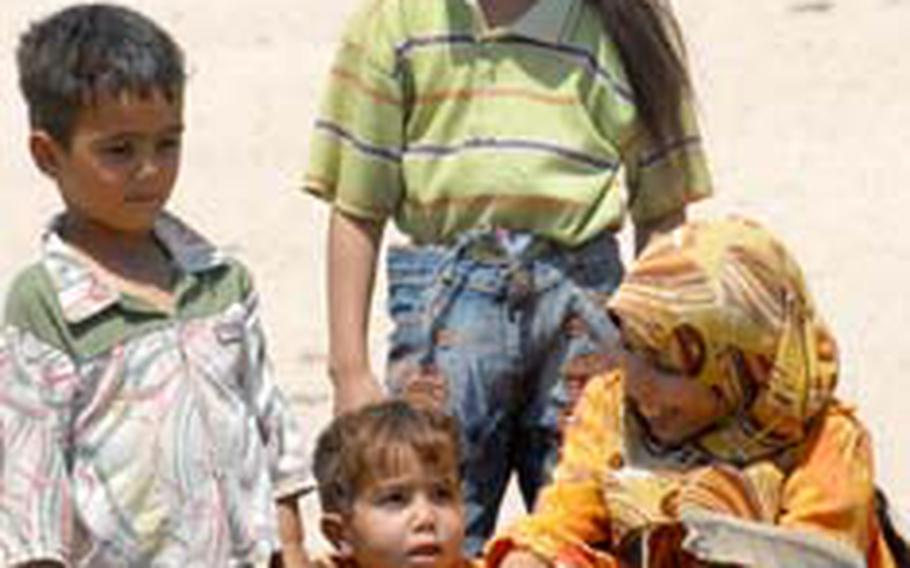 A group of Bedouin children play with an old tire full of water. (Seth Robson / S&S) 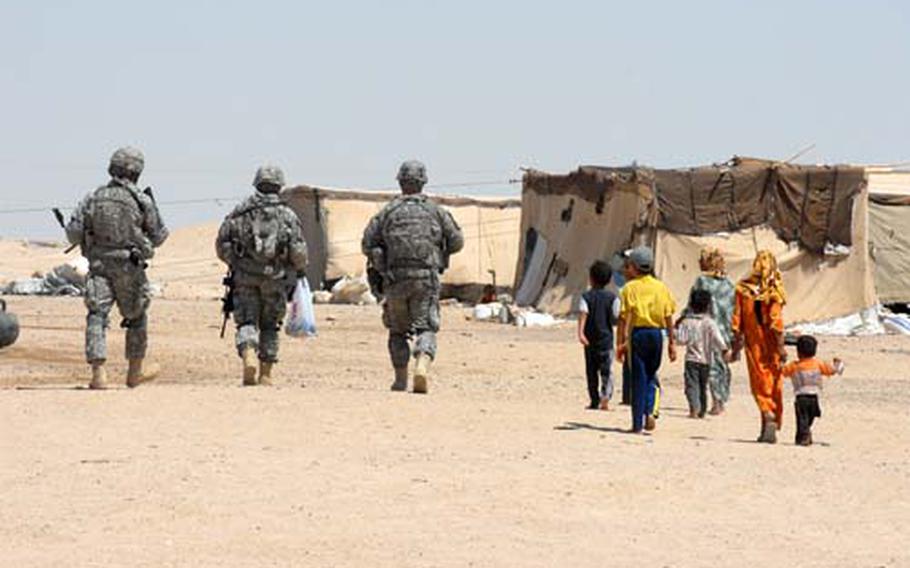 When soldiers from Battery B, 1st Battalion, 77th Field Artillery Regiment, 172nd Infantry Brigade stopped near a Bedouin camp on the fringes of Karbala during a patrol on Saturday they quickly drew the attention of youngsters eager to sample American candy. (Seth Robson / S&S)

KARBALA, Iraq &#8212; The changes that have swept Iraq since the 2003 U.S. invasion has had little impact on Iraqi Bedouins, nomadic people who camp between the nation&#8217;s dense cities and its seemingly limitless Western desert.

Soldiers from Battery B, 1st Battalion, 77th Field Artillery Regiment, 172nd Infantry Brigade encountered the Bedouins during a recent patrol on the fringes of Karbala, where palm trees and houses give way to a sandy plain that stretches to the horizon. It&#8217;s here that the Bedouins camp in makeshift tents with a few possessions that can be packed onto the back of a truck at a moment&#8217;s notice if families decide to move their flocks of sheep to a better location.

In Western art and literature, Bedouins are depicted as noble warriors, galloping across a picturesque desert on fine Arab chargers or sheltering in comfortable tents near an oasis.

But the desert in Iraq these days is littered with plastic trash blown from the cities, and the Bedouins&#8217; tents, made of dirty rags, look like portable versions of the shacks that can be seen in slums in South America or Asia. They appear to be stuck in time and in difficult circumstances.

When soldiers from Battery B stopped near the Karbala Bedouin camp during a patrol on Saturday, they quickly drew the attention of youngsters eager to sample American candy.

Camp resident Farhan Abd Ali, mother of seven children, said most of the male Bedouins travel to Karbala, a city of a million people, each day to work as laborers while their families look after the sheep.

"We&#8217;ve been here five years," she said, surveying the lunar landscape surrounding her ragged tent as cars droned past on the highway nearby.

The land where the Bedouins live belongs to the government, she said.

Another Bedouin, Sahd Abd Zued, spends his days camped in the desert caring for another man&#8217;s sheep.

Zued said the fall of Saddam changed nothing for his people.

"It&#8217;s the same almost. Nobody comes to visit from the government," he said.

The only doctors who have visited the Bedouins were American soldiers who vaccinated the children, he said.

"The Americans came here a couple of times. They are good people. They never hurt me or messed up my life like the government does," he said.

Why would anyone want to live in such a barren place?

Jalel Abd Htet also stays in the camp during the day. A few years ago his speech started to slur and now he&#8217;s confined to a wheelchair.

The family survives on government food rations and by making prayer beads out of mud. Htet&#8217;s sons hitchhike into Karbala to sell them.

The family used to move around like traditional Bedouins, but tough times meant they had to sell their vehicle. So they are stuck.

Only the youngest child in the family attends school, at a village nearby. The others stay home, helping with chores and playing among the tents with kids from other families.

One of the Battery B soldiers, Sgt. 1st Class William Armstrong, 42, of Evanston, Wyo., said he&#8217;d met other Bedouins in Saudi Arabia during the Gulf War.

"When we&#8217;d drive through we&#8217;d see &#8217;em camped out and sometimes they came right through out perimeter chasing their goats," he recalled, adding that he feels bad for Bedouin kids.

"It&#8217;s a shame they have to go through that. Hopefully, they can pick themselves up and do something better," he said.