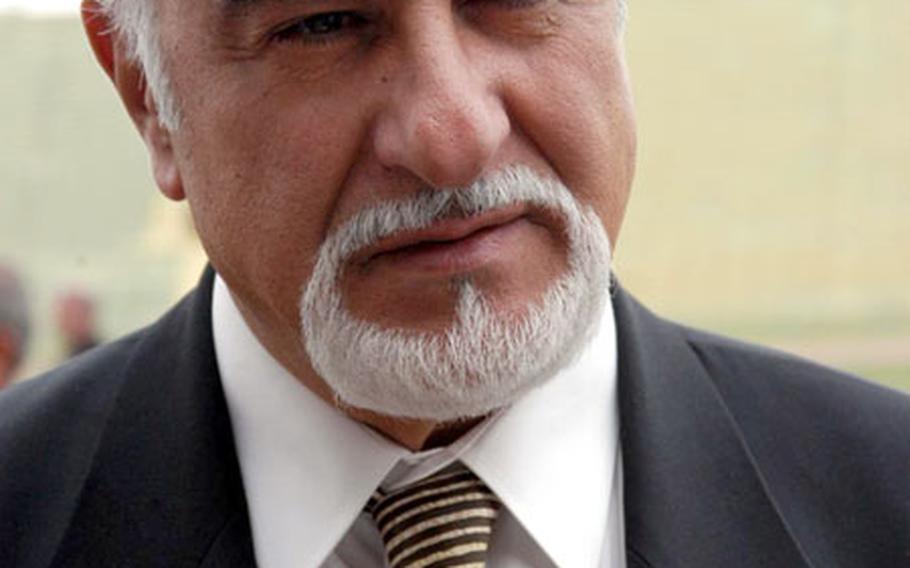 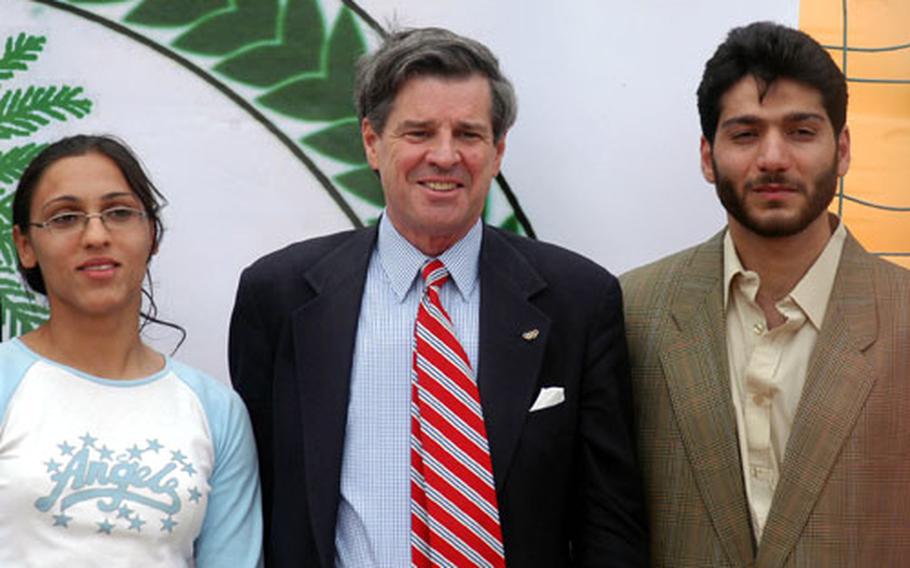 Coalition Provisional Authority administrator L. Paul Bremer is flanked by future Iraqi Olympians Al&#39;aa Hikmet, left, and Raad Abbas Rasheed, after they unveiled the new logo of the Iraqi Olympic team. Rasheed was the first Iraqi to qualify — in tae kwan do — for this year&#39;s Athens Olympics, and Hikmet plans to compete in the 100-and 200- meter track events. (Michael Abrams / S&S)

BAGHDAD &#8212; This war-torn country is not yet ready to challenge the United States, Russia or the world&#8217;s top sporting nations on the Olympic medal chart, but hopes are growing that Iraq will send a sizable delegation to the games in Athens, Greece, this summer.

Two athletes already have received invitations: Raad Abbas Rasheed will participate in tae kwon do and sprinter Al&#8217;aa Hikmet will compete in the 100- and 200-meter events. The country&#8217;s National Olympic Committee, reformed after the fall of Saddam Hussein, also has aspirants in boxing, weightlifting, swimming, wrestling, and track and field.

But Iraq&#8217;s biggest sports hope might lie with the under-23 soccer team, which has been leading its Asian qualifying tournament. Soccer is essentially as big in Iraq as it is worldwide.

Ahmed al-Samarrai, president of Iraq&#8217;s Olympic committee, said that just sending athletes to Athens is a victory. A former captain and later coach of the country&#8217;s national basketball team, al-Samarrai said athletes in Iraq face an array of disadvantages now, with a lack of training facilities and financial support topping the list.

&#8220;Athens is a symbol really,&#8221; he said Friday as the country&#8217;s new national Olympic logo was unveiled. He said the country hopes to do better at the Arab Games in Algeria in September and then field a large and competitive squad at the Olympics in Beijing in 2008.

A lot of that help is already under way. Coalition Provisional Authority chief administrator L. Paul Bremer announced that $3 million would be given to refurbish Al Shaab Stadium, where the country formerly hosted international soccer matches. The stadium in Baghdad, often referred to as Olympic Stadium, is in poor repair and the national team plays all its &#8220;home&#8221; games in Amman, Jordan.

In the meantime, friendly countries are hosting Iraqi athletes who are training in the hopes of qualifying for Athens. Iraqis are swimming in Canada, wrestling in Germany, sprinting in the United States and lifting weights in Bulgaria.

Rasheed has done virtually all his training at a variety of clubs in Iraq. He defeated the reigning world champion in his weight class during a qualification tournament in Thailand, but wound up fifth overall &#8212; two spots short of an automatic bid.

He was given a wild card spot, however, to compete in Athens.

He said through an interpreter that his performance in Thailand makes him believe that he&#8217;s capable of doing well at the games.

Rasheed has participated in only a handful of international tournaments and a few of those were when the country&#8217;s sports programs were under the thumb of Saddam&#8217;s son, Odai.

Odai was known for torturing athletes who didn&#8217;t live up to his expectations. A visit to the now-bombed-out Olympic headquarters &#8212; a few blocks from the stadium &#8212; was not something to look forward to.

Bremer said he hoped that sports could serve to bring Iraqis of all faiths and ethnicities together.

&#8220;Around the world, sport is a powerful and expedient way to transcend the many boundaries often created by complex issues like politics, race and gender equity,&#8221; he said. &#8220;Today&#8217;s Olympic ceremony is truly another reminder that Iraq is back.&#8221;

Or at least on the way.