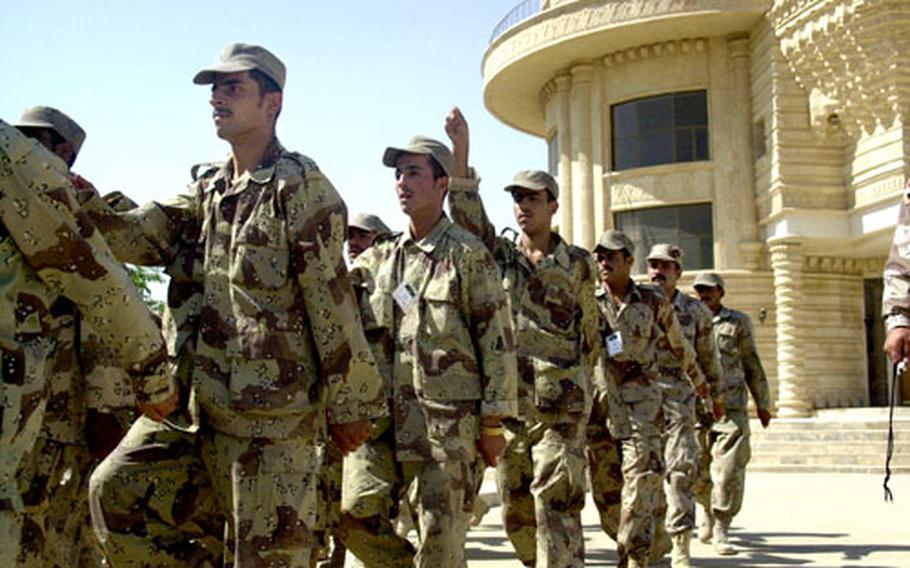 EDITOR&#8217;S NOTE: This is the first of an occasional series detailing the state of the new Iraqi army at varying levels of command.

TIKRIT, Iraq &#8212; When basic trainee Habib Siad talks about his reasons for joining the Iraqi army, he sounds like some U.S. college students close to graduation &#8212; idealistic and ready to take on the world.

Other Iraqi trainees, or jundis, echo Siad&#8217;s patriotic call, although they also note that the roughly $400 per month they&#8217;ll be earning played a large part in their decision to join the post-Saddam forces. What is uncertain is whether the trainees hold fast to their ideals in a multi-ethnic army that U.S. officials say has grown much faster than its logistical structure can keep pace with.

But, U.S. servicemembers also say that, in contrast to a year ago, Iraqi units in some areas are gaining U.S. forces&#8217; confidence and respect for their intelligence-gathering abilities and even their security tactics in joint operations. For improvement to continue, officials say that training schools such as the U.S.-nicknamed &#8220;Iraqi Island&#8221; at Forward Operating Base Danger in Tikrit must be successful.

Iraqi army discipline may seem harsh when compared with U.S. standards. Americans say they have witnessed Iraqi army regulars being slapped, rolled in the mud and struck with sticks. Living as a trainee isn&#8217;t easy either; they train in sweltering heat and live in makeshift tents while construction continues on Western-style barracks.

Odia says he tries to &#8220;give them a break,&#8221; especially since many trainees are cut off from their loved ones, some of whom may have died while they are training.

Iraqi trainees spend four weeks learning fundamental drilling, marching and first aid. They must also qualify on the rifle range from 25 meters (about 82 feet) out and complete an 11-obstacle confidence course. In addition to physical training, trainees spend significant time in the classroom going over concepts such as how to react to enemy fire coming from all directions.

The classroom component is new to the trainees, many of whom had experience in the old regime&#8217;s army. Odia likens the new army training to high school for his trainees.

Because of the abbreviated training time, they skip U.S. basic training standbys such as sleeping in the field, long marches and bayonet use. They concentrate on checkpoint control, which they&#8217;ll likely be doing upon receiving their assignments, said the school commandant, Maj. Don McArdle of the 42nd Infantry Division.

McArdle, who has an Iraqi colonel as a counterpart, has seen 2,400 Iraqis graduate since January. Soon, he will hand over complete control of the island to the Iraqis. McArdle says he has seen vast improvement in Iraqi training since his tenure began, while acknowledging some of its flaws.

For example, trainees and instructors must overcome ethnic hurdles, he said.

Tikrit and its outlying region is predominantly Sunni Muslim, but contains sizeable Shiite and Kurdish minorities. At Iraqi Island, trainees of all ethnicities and regions are mixed into groups of 30 to 40 people at a time.

None of the trainees interviewed acknowledged any ethnic divisions. Trainee Kareem Chwin, a Kurd, said it amazed him when he heard tales of ethnic clashes in the army.

The training center has tentative plans to expand in December, with instruction available for intelligence, logistics and medical specialists. An officer candidate school and a leadership course akin to a noncommissioned officer academy is also in the works, said Sgt. 1st Class Andre Bostic, assigned to the U.S. Army&#8217;s 80th Division from Richmond, Va.

The success of these schools will increasingly depend on support from the Iraqi army leadership &#8212; a cadre of officers used to a highly centralized command and little division of authority under the old regime.

It will also depend on trainees like Chwin, who, despite hailing from what operated as a semiautonomous region under Saddam, calls himself &#8220;a son of Iraq.&#8221;