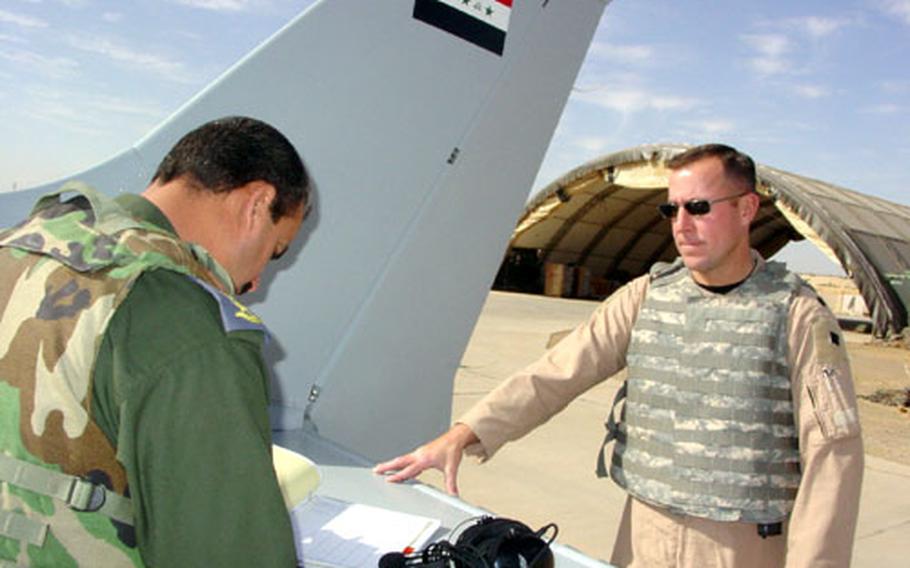 KIRKUK REGIONAL AIR BASE, Iraq &#8212; The gray plane sailed across the desert, propeller spinning at full power through the hot air before banking to the right and flying into the blinding sunshine.

The single-engine Cessna 172 would hardly attract a second glance anywhere else, but in this country, the planes marked &#8220;Iraqi Air Force&#8221; are something special. To veteran Iraqi air force pilots and the American aviators advising them, the new aircraft represent the modest rebirth of Iraq&#8217;s once-formidable air force.

Although rebuilding the Iraqi air force has been slow and has had some problems, there are signs the fledgling service is finally beginning to take off.

Iraqi pilots are flying reconnaissance and surveillance missions over oil pipelines and power plants. C-130 planes donated to Iraq by the U.S. Air Force fly out of Baghdad on cargo missions. In what American pilots consider a milestone, surveillance planes with cameras and thermal imaging helped Iraqi soldiers earlier this year in a mission against insurgents.

Another major step was the creation last month of a flight training school. The school welcomed its first six students.

Establishing the school is critical to creating a new generation of air force pilots to fly the future fleet of planes. Pilots currently flying missions are in their 40s and 50s and flew under Saddam Hussein&#8217;s regime.

Iraq&#8217;s air force has a long way to go before matching the air power it had decades ago in the region. Pilots are nowhere close to flying fighter jets, and for now, rely on propeller planes and small helicopters to get the job done.

Helping along the way and overseeing the reconstruction are hundreds of U.S. Air Force pilots, mechanics, air traffic controllers and other personnel who are a part of what is called the Coalition Air Force Transition Team.

Building the new air force from scratch has had its share of challenges. Officials have battled corruption in the purchase of aircraft, and the more-pressing need to feed the country&#8217;s ground forces first.

But U.S. pilots say there is a new push to get the air force stood up and things have picked up considerably in the last six months.

Bennett, who has experience flying both military and civilian aircraft, commands the 52nd Expeditionary Flying Training Squadron. The unit includes a group of pilots who are deployed to Kirkuk for up to a year to help set up the school so it can be self-sufficient.

The six new Iraqi student pilots are in their 20s and have college degrees. They go through an evaluation phase to assess their skills and must complete weeks of classroom work. Once they complete their primary flight training, they are moved to either fixed-wing aircraft or helicopters. It is expected to take a year before the first class pins on its wings.

In addition to helping train the student pilots, the American aviators are helping some of the veteran Iraqi air force pilots become instructors. The hope is to turn the entire training program over to Iraqi officers in a little over a year, with Americans serving only an advisory role as long as it is needed.

Lt. Col. Muhammed, who did not want his full name published for security reasons, is one of six veteran pilots who are preparing to become instructors. He last served in the Iraqi air force in the mid-1980s before &#8220;retiring&#8221; to work at a state-operated leather company. He had not flown in more than 12 years before returning to duty to instruct.

He smiles when asked what it means to be able to fly again.

There are nearly 1,400 pilots, air traffic controllers, mechanics and other support personnel in the Iraqi air force at U.S. bases in Kirkuk, Baghdad, Taji and Basra. But the goal is to reach 5,000 in two years. The plan is that once the support personnel are in place, the Iraq air force can take over bases like Kirkuk.

The 870th Air Expeditionary Advisory Group is helping oversee support personnel being trained at Kirkuk, which initially appears to be among the first the U.S. Air Force can turn over to the Iraqi air force.