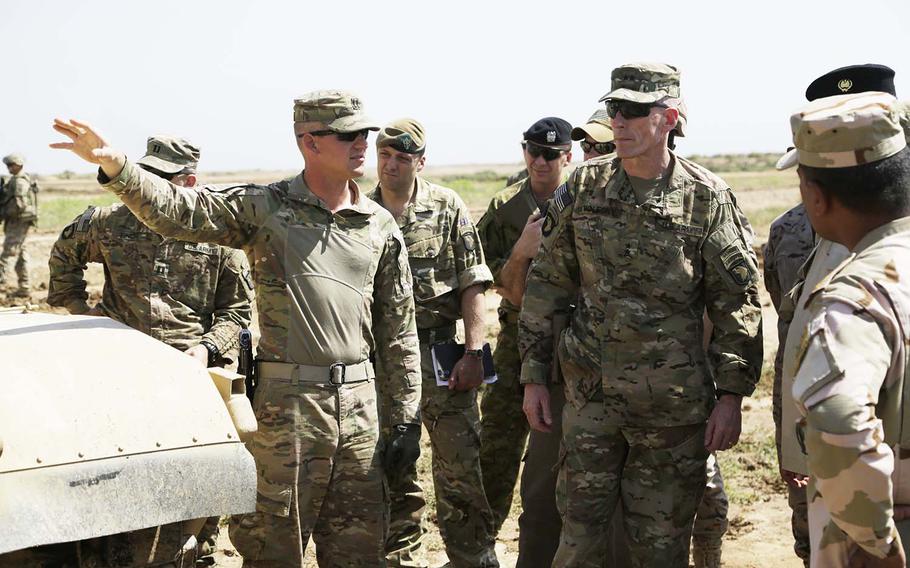 WASHINGTON — Iraqi forces are now closer to Mosul than they have been since the city was taken by the Islamic State group in 2014, the top U.S. ground forces commander in Iraq said Wednesday.

Maj. Gen. Gary Volesky, the U.S. ground forces commander for Operation Inherent Resolve, said Iraqi security forces have made gains in villages around the Iraqi city of al Qayyarah, which is about 22 miles south of Mosul.

It is “the farthest north [Iraqi forces have advanced] since [the Islamic State group] came over,” he said during a news briefing to Pentagon reporters.

Iraq announced in March it was launching its campaign to retake Mosul, which the Islamic State group uses as its headquarters in the country. The terrorist group is estimated to have about 5,000 fighters inside the city and another 2,000 to 3,000 outside the city, according to Maj. John-Paul Depreo, who briefed reporters in April traveling to Baghdad with Secretary of Defense Ash Carter.

Al Qayyarah is directly to the west of Makhmour, where Marines have manned heavy artillery at Fire Base Bell used to provide overhead fire to help Iraqi forces advance against the villages south of Mosul, Iraq’s second largest city. Those Marines will be replaced soon by members of the 101st Airborne Division from Fort Campbell, Ky., Volesky said.

He also said the advance of Iraqi forces toward Mosul has put pressure on the Islamic State’s ability to resupply itself and is becoming more entrenched in Mosul.

“What we have seen is a clear degradation of their ability to reinforce and conduct offensive operations,” Volesky said during a video teleconference from Baghdad. “The Iraqis are putting pressure on them. Our kinetic strikes from our close air support have had a significant impact on the enemy – we get indications that they are challenged to resupply forces, move in men, weapons and equipment throughout Iraq.”

Volesky would not say whether he thought the Iraqis would take Mosul before the end of the year. Iraq’s Muslim population is about to observe Ramadan, a holy month of daytime fasting that could potentially pull trained forces away from the fight. The annual fast has also been tied to increased attacks in past years.

Volesky acknowledged the concerns about Ramadan and said the Iraqi commanders “understand the timeliness and advantages they have right now. They are focused on getting to Mosul as quickly as possible.”