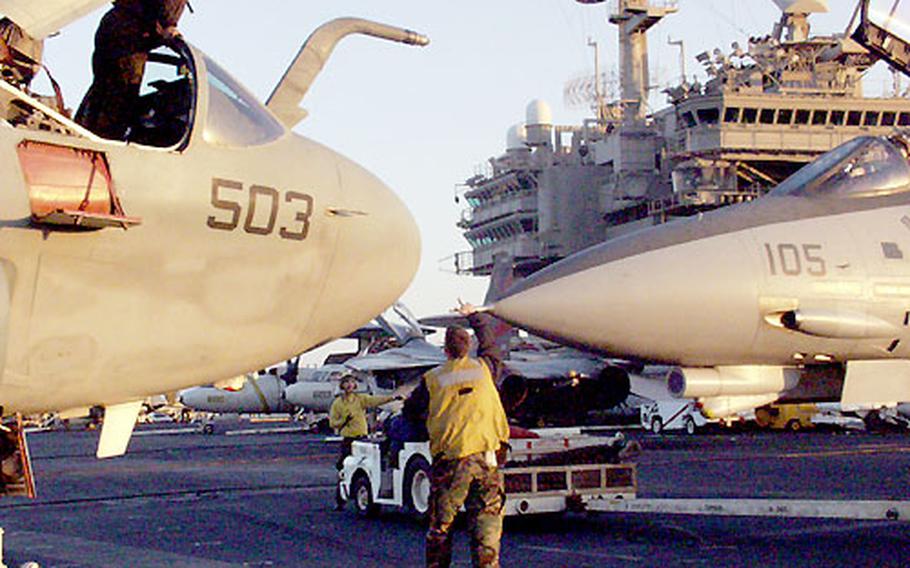 A sailor in an EA-6B Prowler, left, looks down at a fighter getting close to the aircraft while it’s being parked on the USS Kitty Hawk flight deck. (Kendra Helmer / S&S)

A sailor in an EA-6B Prowler, left, looks down at a fighter getting close to the aircraft while it’s being parked on the USS Kitty Hawk flight deck. (Kendra Helmer / S&S) 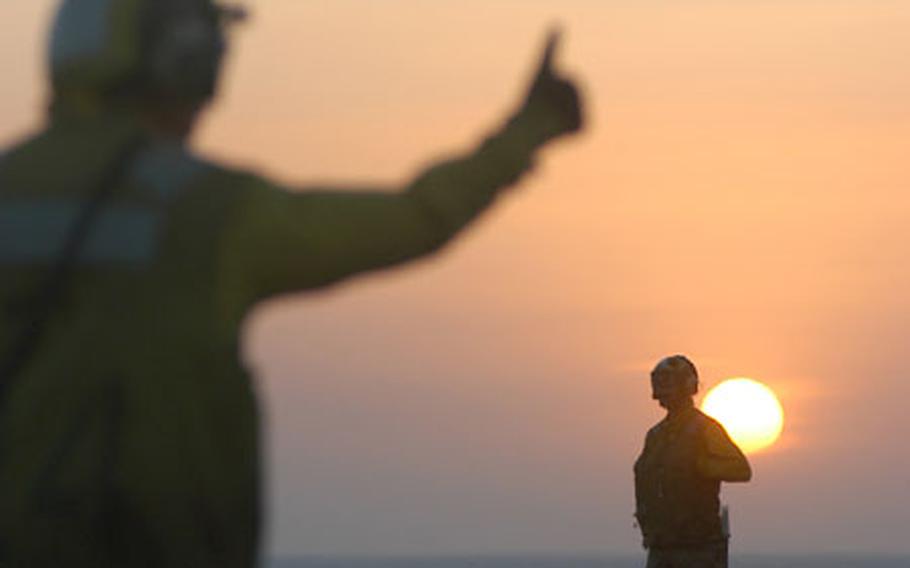 Sailors work on the flight deck of the USS Kitty Hawk during sunset as a jet flies overhead. (Kendra Helmer / S&S)

For two months, sailors on the guided-missile cruiser USS Cowpens sailed around the Persian Gulf without a glimpse of land.

They knew war was near. They knew their ship &#8212; chock-full of Tomahawk missiles &#8212; was ready to spring into action.

Then, on March 20, their Yokosuka, Japan-based ship got the call to fire upon a target in Baghdad. Most sailors slept through the launch.

The next day, however, they hustled to a small helicopter hangar to witness what would be called a night of &#8220;shock and awe.&#8221; Navy ships fired 381 Tomahawks from the Red Sea, Mediterranean Sea and Persian Gulf.

Throughout the conflict, the Navy launched more than 800 Tomahawks. Of the service&#8217;s 12 aircraft carriers, three served in the Gulf and two in the Mediterranean in direct support of Operation Iraqi Freedom.

As of late April, Navy strike and surveillance aircraft had flown about 8,000 sorties in the conflict, supporting land and air forces. By comparison, Air Force fighters and bombers flew more than 9,000 combat sorties, while its surveillance aircraft logged 432 flights. The Air Force also dropped about 18,000 munitions &#8212; 11,000 guided and 7,100 unguided bombs.

The conflict in Iraq proved there is still a need for aircraft carriers and their accompanying ships, said Phil Anderson, a senior fellow at Center for Strategic and International Studies, a think tank in Washington, D.C.

&#8220;Enormous air capability was brought to the fight because of the aircraft carrier, and that&#8217;s a key point,&#8221; said Anderson, who retired as a Marine colonel after 24 years of service. &#8220;They served an appropriate role for this opportunity, and I don&#8217;t think you will have anyone tell you they didn&#8217;t provide an exceptional value to the fight.&#8221;

&#8220;The biggest role the Navy played was providing a platform for launching cruise missiles for precision strikes, and that&#8217;s not what the Navy wants to hear,&#8221; Pena said. &#8220;When you say Navy, you think of aircraft carrier. But carrier-based air power is just becoming less and less significant in terms of modern warfare.&#8221;

But Anderson says the carriers&#8217; presence was invaluable given the limited forward-basing opportunities.

Turkey did not allow elements of the 4th Infantry Division to cross over land to invade Iraq from the north. Instead, smaller, lighter elements from the 173rd Airborne Brigade from Vicenza, Italy, airdropped into the northern territory to establish control so that larger Army and Marine Corps elements could make their way north once Baghdad fell to coalition control April 9.

&#8220;The unique thing we [the Navy] bring to the game is assured access to the region,&#8221; said Jim Hanna, chief of staff for Naval Forces Central Command and the 5th Fleet.

Hanna also said the Navy brought speed and lethality to the picture.

No one service won the war, Hanna said.

At any one time, there were 150 U.S. and coalition ships taking part in the effort.

&#8220;Our ships and aircraft were well maintained and reliable, met all missions assigned,&#8221; he said.

But with the Air Force&#8217;s B-52s dropping Joint Direct Attack Munitions, or JDAMs, from 20,000 feet, there is less and less of a need for naval air power, which carries considerably fewer and lighter munitions, Pena said.

With technological advances, including precision-guided munitions from the air and sea, naval air power should take a new focus and transition to perfecting missions such as search and rescue, extrication and responding to crises, he said.

The Navy has budgeted $11.7 billion for its next generation of nuclear-powered aircraft carriers, called CVN-21, and plans an initial operational capability date of 2014, officials have said.

As the war became more of a ground campaign, several ships, including the Cowpens, headed home. The Yokosuka-based cruiser, part of the USS Kitty Hawk battle group, spent 104 days at sea.

Before allowing his sailors some leave, Dixon talked on the ship&#8217;s intercom about their accomplishments, &#8220;and how even I wouldn&#8217;t completely appreciate what we did right away.&#8221;