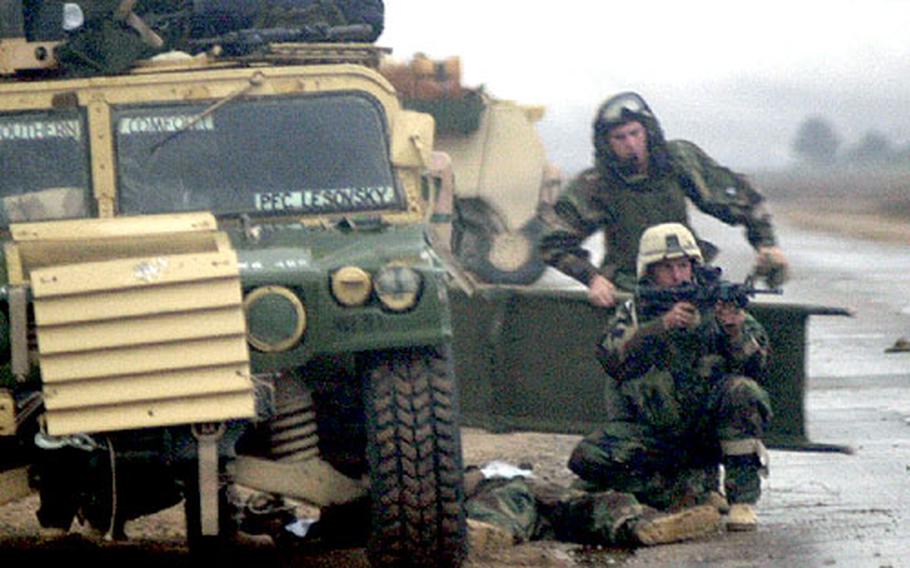 Capt. Scott Brannon provides cover fire while medics rush to aid Spc. Shawn Williams, who was shot through the abdomen during an assault on a southern Iraq airfield March 21. (Joseph Giordono / S&S)

Capt. Scott Brannon provides cover fire while medics rush to aid Spc. Shawn Williams, who was shot through the abdomen during an assault on a southern Iraq airfield March 21. (Joseph Giordono / S&S) 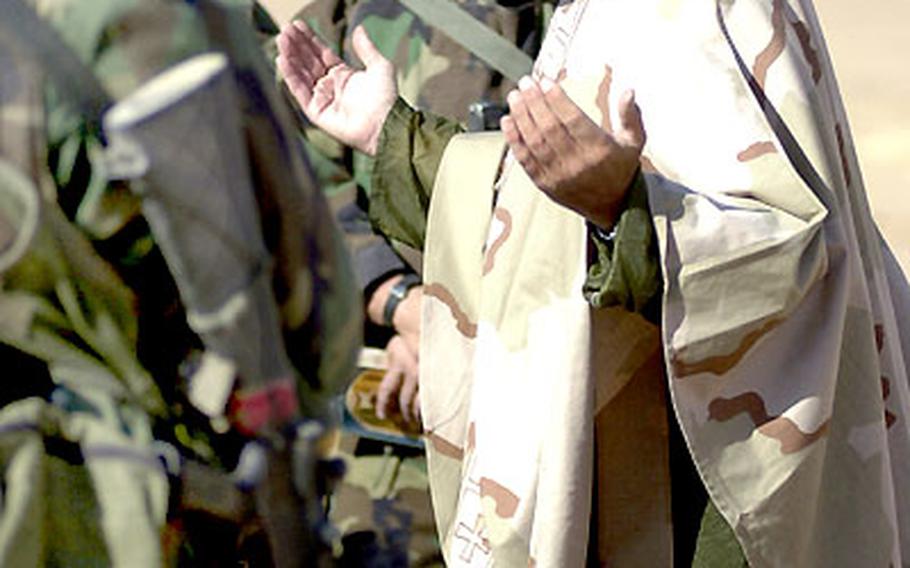 A Catholic chaplain from the 3rd Infantry Division performs Mass in the desert outside Karbala, Iraq, on March 28. (Joseph Giordono / S&S) 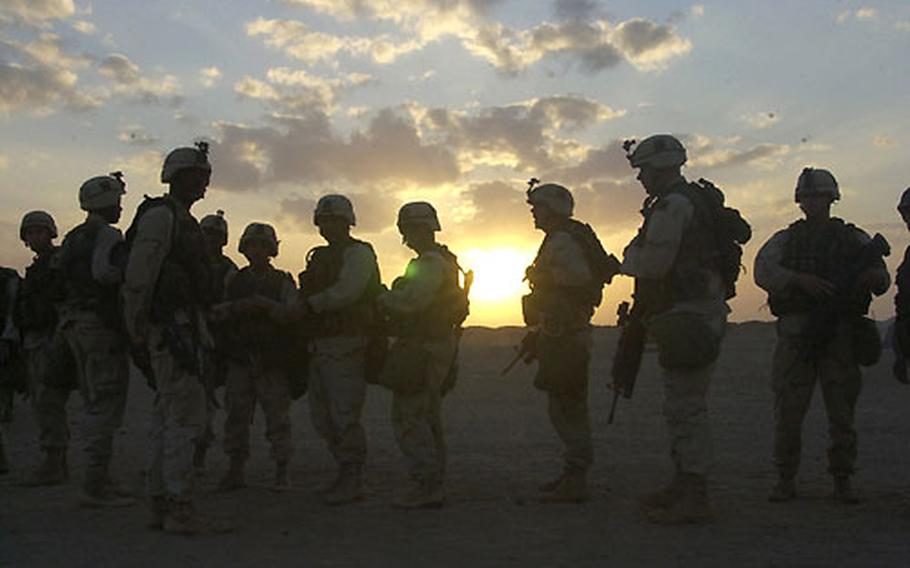 Troops from Company B, 1st Battalion, 15th Infantry assemble during the march north to Baghdad on March 23. (Joseph Giordono / S&S) 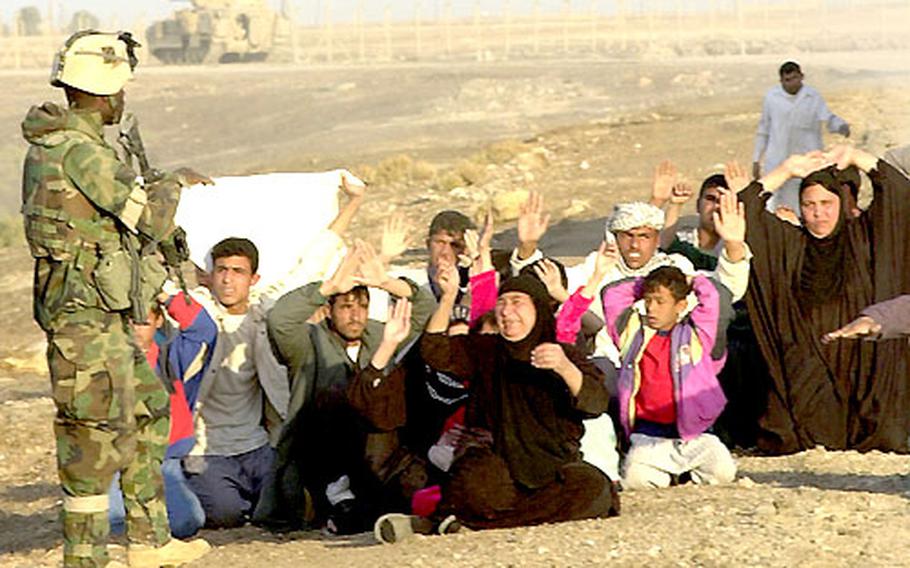 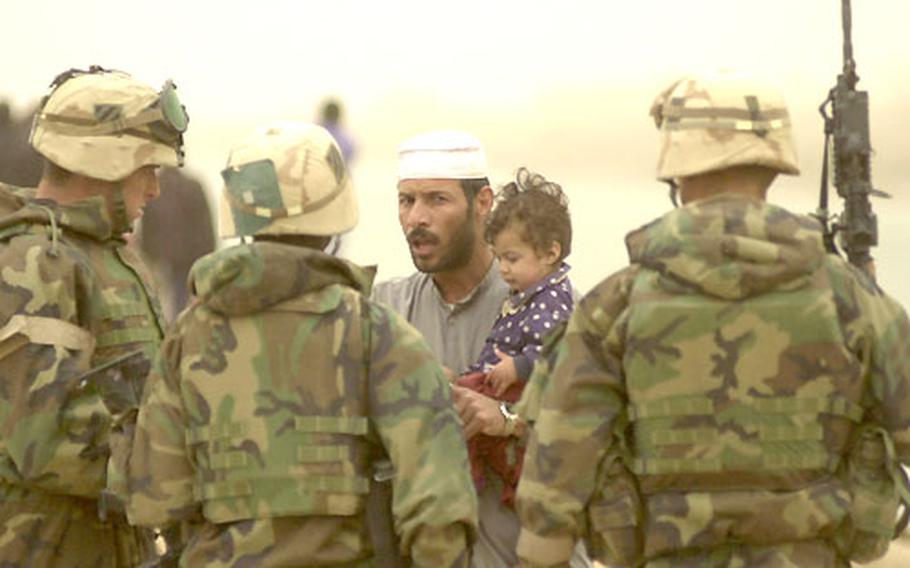 An Iraqi man tries to convince troops from the 1st Battalion, 15th Infantry Regiment to let him pass through a checkpoint near the city of As Samawah on March 26. (Joseph Giordono / S&S)

The soldier is not a photographic machine. He is not a camera. After a battle each soldier will have different stories to tell, vastly different stories, and that when a war is ended it is as if there have been a million wars, or as many wars as there were soldiers.

These are the stories they tell:

Williams managed three short screams after getting shot in the stomach, said he couldn&#8217;t feel his legs and then just closed his eyes and let his head fall back to the ground.

Gonzalez &#8212; who talked so much about going home and playing soccer &#8212; jumped out of a Humvee in the middle of the night to relieve himself, got hit by a sniper and later lost the lower half of his leg. When the sun finally rose, it revealed a pack of wild dogs licking the pool of blood he&#8217;d left behind.

There were the pitch-black first hours of the war, when night-vision goggles revealed a green nightmare of overmatched Iraqi soldiers vaporized in the turrets of exploding tanks.

In the morning, the roads were littered with burned-out vehicles and charred bodies, mouths agape, some posed forever in a desperate crawl out of a shattered window.

There was the Friday field Mass after the first week of war, in which the Army chaplain gave absolution to American soldiers by comparing killing in war to &#8220;accidentally running over a little girl who runs into the street, chasing her ball.&#8221;

But when the chaplain passed around bags of plastic rosaries and Virgin Mary medallions, every hand closed around yet another icon to get through the war.

A few days later, Bradley crews would be running over Iraqi soldiers jumping out of the tall grass near Karbala, in some bizarre perversion of the famous video image of the Chinese man defiantly blocking a column of tanks at Tiananmen Square.

They are images, moments in time that the soldiers would relate to one another over and over. Most times they&#8217;d laugh, not knowing what else to do.

Sgt. Blount stood tall in the middle of a road, firing his machine gun at a pair of Saddam Fedayeen fighters who were charging at him with RPGs mounted on motorbikes.

For every soldier in the war, there was a different perspective, a different nugget that meant something larger.

I&#8217;d been in Kuwait since January, covering the buildup to war. As a Stripes reporter, I&#8217;d been deployed to war zones before &#8212; Uzbekistan, the Philippines and Afghanistan. I was not naive about the realities of conflict. But none of that prepared me for what was to come.

The 1-15th was among the lead elements of the invasion force, pushing through formerly anonymous towns that would soon become famous from headlines: Najaf, Nasiriyah, As Samawah, Karbala.

Before the war began, senior Army commanders briefed the media on the war plan. They expected little resistance from Iraqi defenders in the south, going so far as to say they might get a welcome parade or two along the way.

Soon, it would become obvious how ludicrous those assumptions were, at least for the 1st Battalion.

While many regular Iraqi army units evaporated in a rush to surrender, the soldiers quickly came to recognize the paramilitaries as the biggest threat: black-hooded fanatics, armed with shoulder-mounted rockets and the conviction that giving one&#8217;s life in battle was the highest honor.

The mad dash north had unintended consequences &#8212; some support convoys got bogged down in the sand, left behind by the combat vehicles; some took wrong turns and blundered into ambushes of armored Iraqi forces.

How many people will remember that the most celebrated story of the war &#8212; the rescue of Pfc. Jessica Lynch &#8212; began as a lapse in logistics and planning?

It could have happened to the 1st Battalion.

On the first day of the war, the 1-15th raced across the desert toward its initial objective, an airfield in southern Iraq. While the combat tracks had no problem tearing across the sand, many of the smaller, wheeled vehicles floundered. The combat power left the crews behind to dig themselves out and get back on the road.

One guy named Hughes spent four days sitting on the hood of his broken-down truck about 20 miles north of the Kuwait border. He passed the time making sketches, watching convoys drive by and trying to hitch a ride north, he said.

Then one day, he just showed up near Najaf, rejoining the 1st Battalion. Everyone was shocked &#8212; they assumed he was dead.

&#8220;I wondered why everyone was so happy to see me,&#8221; Hughes said, once the other soldiers told him how they thought he was a goner.

The soldiers can describe what it is like to be caught in an ambush, shot at by snipers, shelled by artillery and have an RPG miss a Humvee by a few feet.

They can tell you how they fought through those moments, wavering between a strange sense of calm and an absolute fear never felt before.

The older soldiers can tell you how odd it is to watch an 18-year-old kid go from high school graduate to grizzled combat veteran in the span of a few days.

The kid who cowered at the sound of every explosion becomes the guy who barely looks up from his MRE to pronounce, with a preternatural calm, whether the current barrage is incoming or outgoing.

The first time I remember meeting Brian Bollan, a moon-faced private from Detroit, he was just another guy scarfing down the hamburger patty and baked beans that served as the final hot meal before the war.

Before the war, guys like Bollan answered the most obvious question with a startling unanimity: &#8220;The fastest way home is through Baghdad. If killing Iraqi soldiers is the fastest way home, then let&#8217;s start the war.&#8221;

Whatever their opinion of why the war was going to happen, they all focused on the most basic reality: If they did not kill the enemy, the enemy would kill them.

A week before the war began, I wrote a story about the 1st Battalion&#8217;s Scout Platoon, with whom I would ride for the next several weeks.

As a favor, I e-mailed a digital picture I&#8217;d taken of platoon leader Capt. Scott Brannon to his wife and daughter back home in Fort Benning, Ga.

He was thrilled by the response that showed up in my e-mail a few days later. His daughter, his wife reported, was jumping at the excitement of having &#8220;seen Daddy on the computer.&#8221;

Just days later, I took another picture of Capt. Brannon. This time, he was crouched in front of Williams &#8212; the soldier shot in the stomach &#8212; providing the only cover to his comrade&#8217;s prone body as bullets flew from all around and a team of medics rushed to his aid.

There were other changes &#8212; gray had sprouted in his close-cropped, brown hair. At 31, Brannon was dealing with the ultimate responsibility. His war was not about regime change or chemical weapons or liberating a dominated people. His war was about getting every man in his platoon home.

Williams was lucky &#8212; the shot that passed through his flak jacket, into his gut, out his back and through the back of the flak jacket did not kill him.

Every day now, I check half a dozen Web sites listing the casualties in Iraq, hoping not to recognize any of the names. A few days, I have.

Nothing can tell the soldiers&#8217; stories better than what was inside those envelopes.