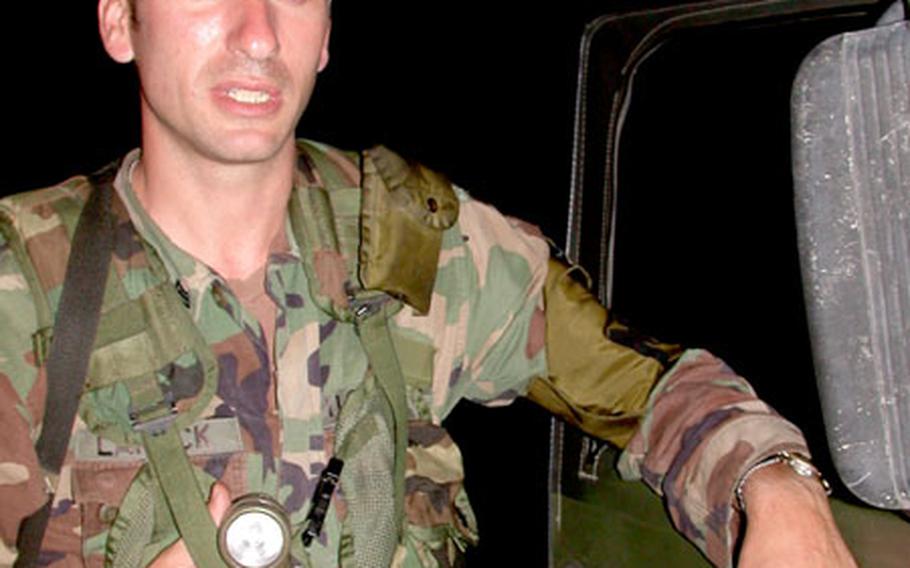 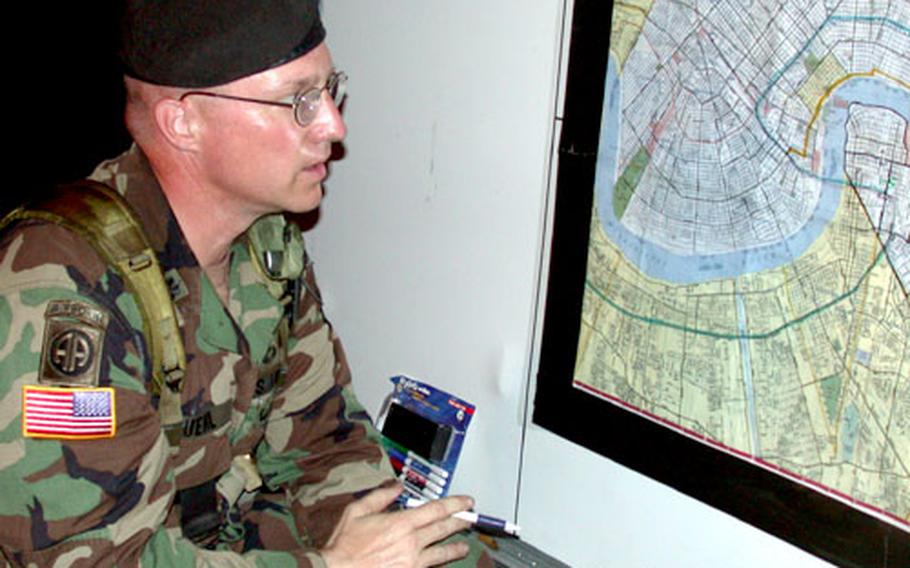 NEW ORLEANS &#8212; The only sound in the quiet night in the Algiers section of town was the singing of bullfrogs. The low-rent apartment buildings were dark, with shredded plywood window coverings the only reminder that a big wind passed this way more than a week ago.

Sitting in the driver&#8217;s seat of his thin-skinned Humvee, Spec. Corey Mourning of the 1/8 Cavalry, 1st Cavalry Division put his head out the window. In the commander&#8217;s seat, 1st Lt. Jay Ireland used his night-vision goggles to scan the canal, a convenient entry and exit point for criminals intent on looting the neighborhood in Hurricane Katrina&#8217;s aftermath.

Mourning, like so many active-duty soldiers today, is a combat veteran. He earned his Purple Heart in Baghdad on Dec. 28, 2004, when a car traveling 80 mph hit his Humvee.

Mourning, who was the gunner, was ejected from the vehicle. His commander, who was holding onto Mourning&#8217;s legs, came out after him.

The only soldier who didn&#8217;t make it out died that day.

Mourning doesn&#8217;t remember all this; he learned it from other witnesses.

He suffered a severe concussion and short-term memory loss, not to mention the loss of a friend.

But he gained something in Iraq.

Capt. Jeremy Fowler, Charlie Company&#8217;s commander, said that most of the soldiers he is working with on this mission are veterans like Mourning, and their experience shows.

&#8220;Patrolling is part of what we did in Iraq,&#8221; Fowler said Wednesday, as he and his company sweltered through their second night based in the stale gymnasium of L.B. Landry High School.

His soldiers learned many new skills in Iraq, Fowler said, &#8220;but the biggest one is just being able to interact with people. These guys are very at ease walking down the street and talking to people.&#8221;

The Texas Army National Guard&#8217;s 133rd Field Artillery Co. (MP Provisional), had just adjusted to their new policing mission and completed a relatively quiet year at Fort Campbell, Ky., when called in as one of the first Guard units to respond to the crisis at the Superdome last week.

The Texas Guard is now working with the 1st Cavalry to provide security for Algiers, but their first task last week was to organize the crowd at the Superdome and load them in &#8220;an orderly fashion&#8221; onto waiting buses for evacuation.

They were greeted by an estimated 20,000 hungry, thirsty, desperate evacuees.

The Guardsmen went in naked, so to speak; they had been ordered in advance to wear their weapons over their shoulders in order not to provoke the crowd &#8212; despite the fact that at least one sniper had already tried to shoot at a military helicopter from inside the dome.