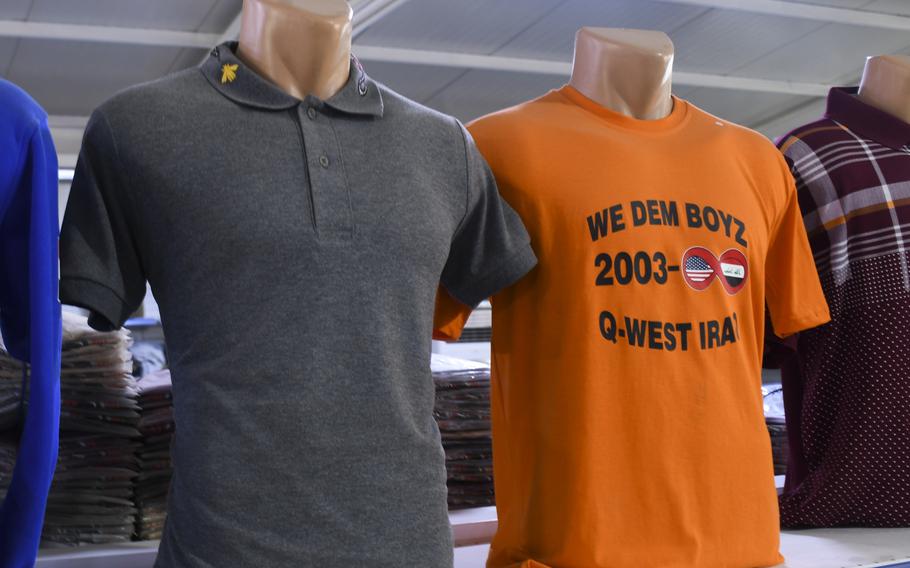 Buy Photo
A T-shirt indicating a potential U.S. presence at Qayara Airfield West, also known as Q-West, from 2003 to infinity is displayed Thursday, Dec. 26, 2019, in a bazaar on the base about 40 miles south of Mosul, Iraq. (Chad Garland/Stars and Stripes)

Buy Photo
A T-shirt indicating a potential U.S. presence at Qayara Airfield West, also known as Q-West, from 2003 to infinity is displayed Thursday, Dec. 26, 2019, in a bazaar on the base about 40 miles south of Mosul, Iraq. (Chad Garland/Stars and Stripes) 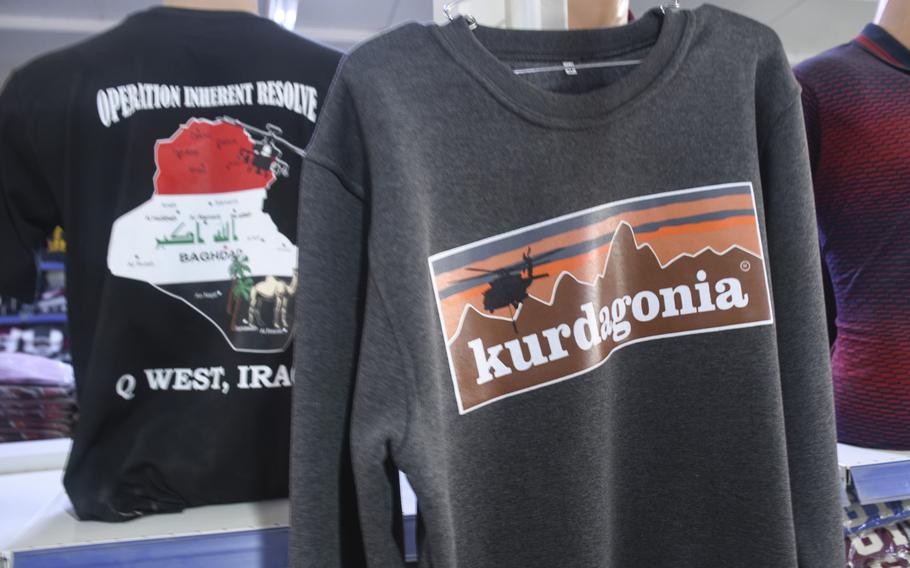 Buy Photo
Shirts are displayed at a bazaar on Qayara Airfield West in Iraq on Thursday, Dec. 26, 2019. (Chad Garland/Stars and Stripes) 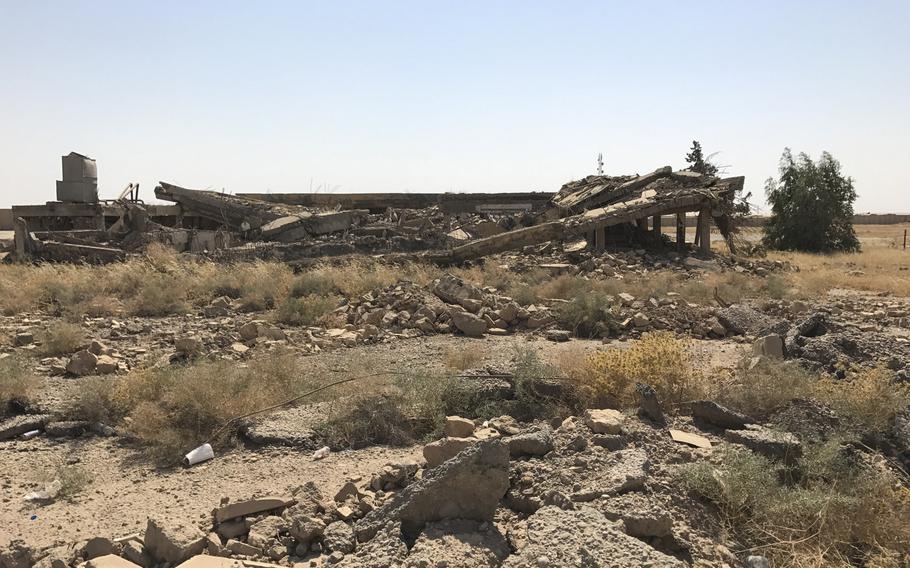 Buy Photo
The rubble of a flattened building on Qayara Airfield West is seen Friday, Sept. 22, 2017. The base had been taken by Islamic State in 2014 and was destroyed by the militants and the fighting to retake the base from them. U.S. Army engineers rebuilt part of the base in late 2016 as part of the Iraqi military's coalition-backed push to retake Mosul. (Chad Garland/Stars and Stripes) 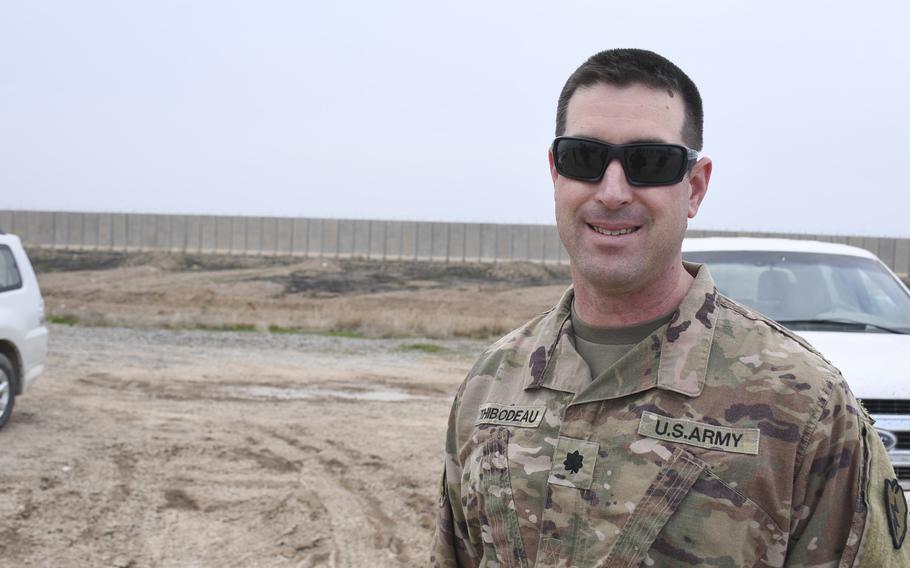 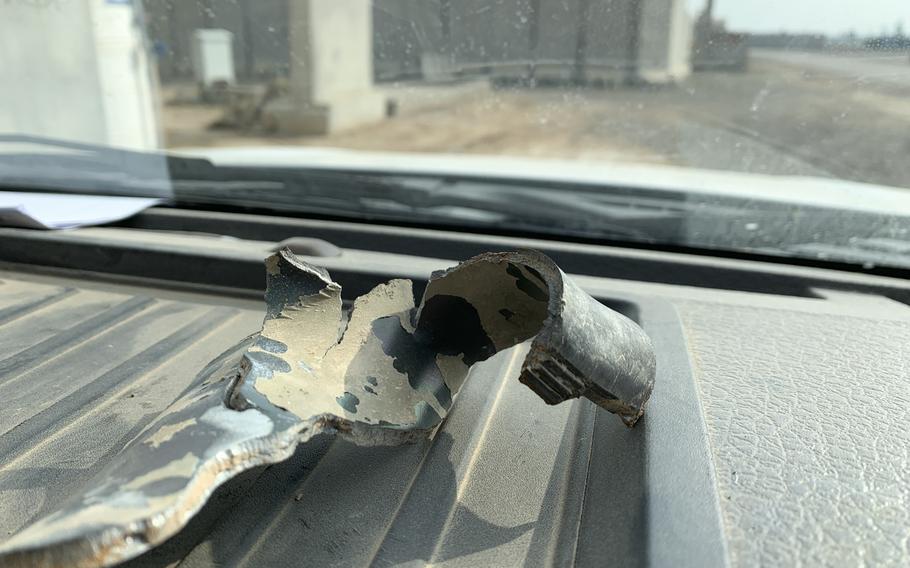 Buy Photo
A fragment from a rocket that struck Qayara Airfield West in November is displayed on the dash of a U.S. government truck at the base on Thursday, Dec. 26, 2019. (Chad Garland/Stars and Stripes) 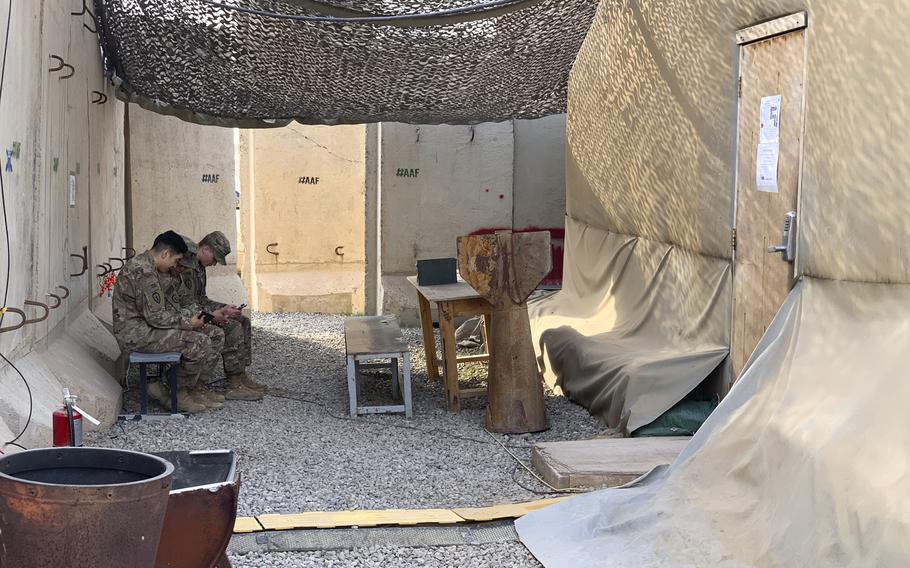 Buy Photo
U.S. soldiers view their smartphones in a break area outside a command center on Qayara Airfield West in Iraq on Thursday, Dec. 26, 2019. (Chad Garland/Stars and Stripes)

QAYARA AIRFIELD WEST, Iraq — U.S. officials had been discussing pulling out of some Iraqi bases to consolidate the American and allied troop presence in the country, but conflict with Iran and calls from Baghdad for foreign troops to withdraw have left those plans in limbo.

The coalition part of this base in northern Iraq, known as Q-West, was a likely first candidate to be shuttered, officials here said in late December, shortly before the escalation of tensions between Washington and Tehran on Iraqi soil.

At Q-West, things are still “up in the air,” an unnamed defense official told Stars and Stripes last week.

Weeks ago, the U.S. commander at the base had been planning for a potential drawdown, though no final decisions had yet been made.

On Christmas Day, Lt. Col. Stephen Thibodeau said he was optimistic about Iraqi government forces’ improving ability to develop intelligence and rely on their own systems for combat support in the fight against Islamic State.

“The conditions on the ground have created a huge opportunity to get smaller while getting better,” said Thibodeau, who is also head of the 2nd Battalion, 8th Field Artillery Regiment out of Fort Wainwright, Alaska.

But then a deadly rocket attack hit a coalition base about 100 miles east of Q-West, escalating tensions and triggering a chain of events including the U.S. drone strike that killed Maj. Gen. Qassem Soleimani outside Baghdad International Airport.

That was followed by a hasty vote by Iraq’s majority Shiite parliament approving a measure calling for foreign forces to leave the country.

It’s unclear what the tensions will mean for Q-West, which has been home to thousands of U.S. troops over the years, including elements of the 101st Airborne Division, which was based here following the 2003 invasion.

The base was returned to the Iraqi air force in 2010 before falling to ISIS four years later.

As the insurgent group was forced out of northern Iraq, it destroyed much of Q-West. But Army engineers rebuilt the base, which has been used as a logistics hub and a fire base since 2016.

Coalition troops at Q-West continue to play a critical part in the anti-ISIS fight, largely from behind the base’s concrete blast walls.

“They haven’t seen a lot of action,” Thibodeau said of his troops, who have been at Q-West since early September.

But in November, a barrage of more than 30 rockets disturbed their relative peace. The projectiles impacted in an uninhabited part of the base and no one was hurt. The base’s howitzers quickly fired back at the rocket launcher, said operations officer Capt. Brad Bynum.

In several ways — the timing, the launcher setup, the number of rockets — the strike resembled the Dec. 27 attack that killed a U.S. civilian contractor and wounded four American soldiers and two Iraqis in Kirkuk, setting off the events that escalated tensions in the region. The U.S. blamed that attack on an Iran-backed paramilitary group tied to Soleimani.

With the Middle East bracing for a possible new conflict, instead of paring down its numbers, the U.S. has sent thousands more troops to the region.

Despite a leaked military memo last week suggesting that the coalition was preparing to pull out of Iraq, Pentagon leaders quickly said the U.S. had no plans to do so.

And on Friday, the State Department responded to the Iraq government’s request that the U.S. send a group to negotiate withdrawal plans, saying any delegation sent to Iraq would focus on recommitting to a strategic partnership and determining the “right, appropriate force posture in the Middle East.”

Thibodeau summed up the uncertainty facing U.S. forces at the base on Christmas when he told visiting colleagues that he’d prefer to use silverware to eat, rather than plastic cutlery.

“But that would just be one more thing for me to throw in a dumpster” when the time comes to leave, he said.