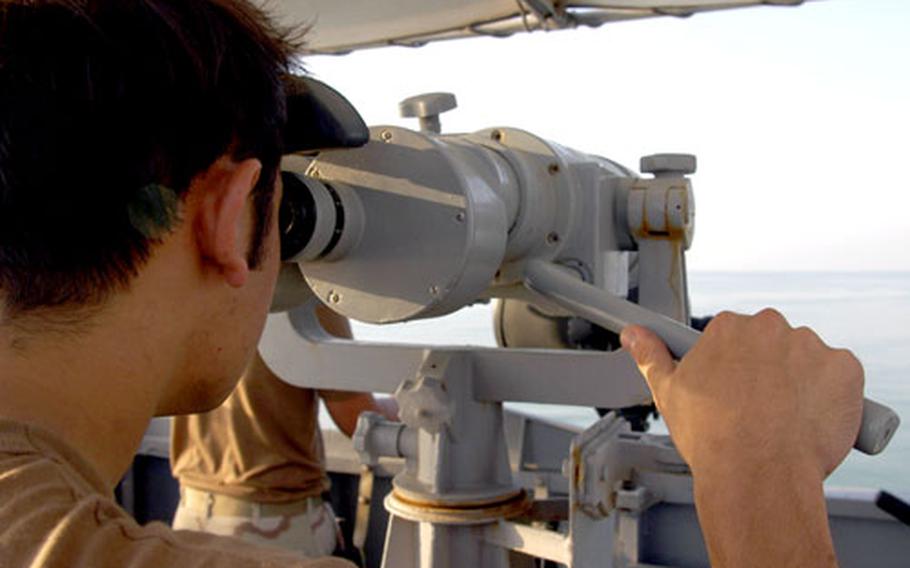 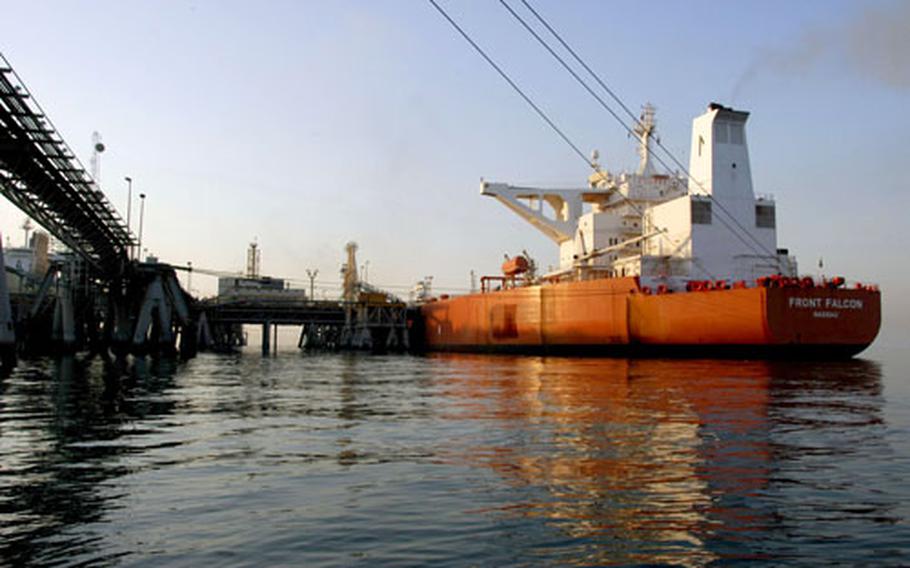 A commerical tanker fills up at the Basra oil terminal in the northern Persian Gulf. (Jennifer H. Svan / S&S) 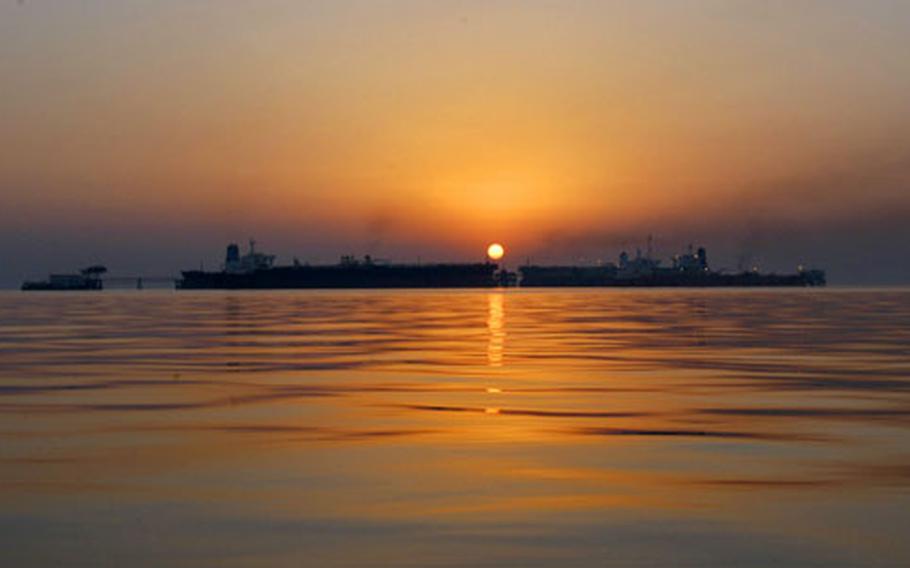 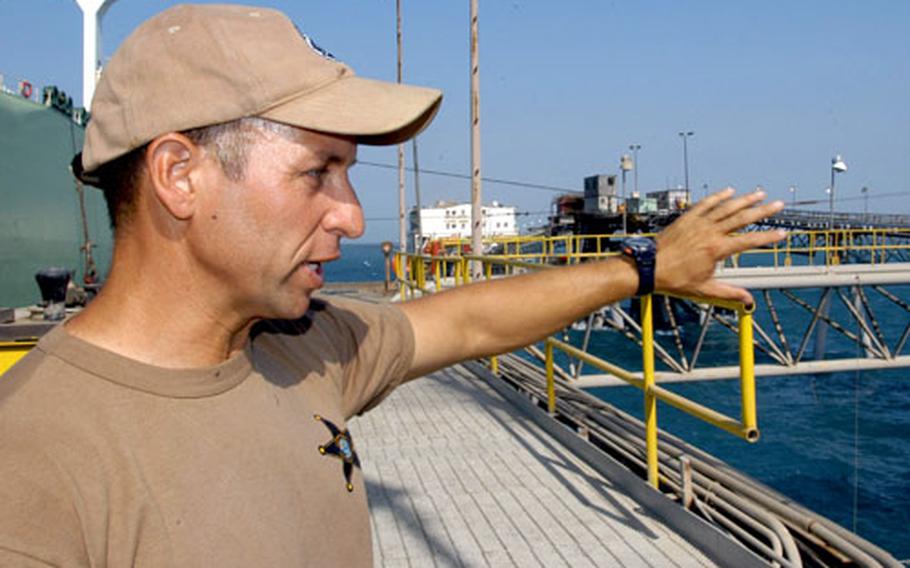 Navy Lt. Aaron Bergman, officer in charge of Mobile Security Detachment 73, looks out over the Basra oil terminal. If something happened to the terminal, Bergman says, Iraq’s economy might not survive. (Jennifer H. Svan / S&S)

Editor&#8217;s note: Reporter Jennifer Svan spent more than a month in Kuwait and Bahrain. This is the first in a three-part series on coalition forces&#8217; efforts to guard the oil terminals that are key to Iraq&#8217;s future.

ABOARD THE USS PHILIPPINE SEA &#8212; Rising off the southern coast of Iraq is a metal monstrosity rusted in places and nicked with bullet holes from past wars in this tense part of the world.

The Basra oil terminal churns out black gold in the Persian Gulf miles from land, representing, many say, Iraq&#8217;s hope for the future.

About 1.5 million barrels of crude oil per day are pumped via two pipelines from southern Iraq into the terminal and then onto giant commercial oil tankers at Basra.

The oil brings the country about $11,000 a second and makes up about 86 percent of its economy, according to U.S. military and coalition officials.

&#8220;If this platform were to go down &#8230; reconstruction efforts in Iraq would really be compromised. I can&#8217;t imagine the economy surviving,&#8221; said Navy Lt. Aaron Bergman, officer in charge of Mobile Security Detachment 73, a unit from Naval Base Guam that is helping Iraqis protect Basra and the smaller Khwar Al Amaya oil terminal.

Ever since Navy SEALs secured the off-shore oil terminals in March 2003, maritime security operations in the region have ramped up to defend the terminals from terrorist attacks &#8212; such as one on April 24, 2004 &#8212; and keep the high seas safe for normal trade and transit.

About 45 U.S. and coalition ships patrol about 2.5 million square miles of international waters from the Persian Gulf to the Red Sea in the U.S. 5th Fleet area of responsibility. On board is a mix of U.S. Navy, Marines and Coast Guard, and coalition personnel, led by three maritime combined task forces.

&#8220;Where we&#8217;re really focused on now in the maritime security role is trying to be sort of the neighborhood good cop on the beat,&#8221; said Navy Rear Adm. John W. Miller, deputy commander of U.S. Naval Forces Central Command and 5th Fleet.

Lines in the waterThe maritime security mission may be the most complex in the northern Persian Gulf, where sometimes hundreds of fishermen in small, rickety vessels called dhows look to net their livelihood in sight of the Iraqi oil terminals.

Toss in the threat of terrorism, the occasional acts of piracy and illegal smuggling, the close proximity to Iranian waters, the stifling summer temperatures and the winter windstorms, and the environment can be a pressure cooker.

&#8220;It&#8217;s quite a taxing job for them from a number of aspects,&#8221; said Royal Australian Navy Commodore Peter Lockwood, who, from the USS Philippine Sea, commands about 1,000 U.S. Navy personnel and about 500 British and Australian sailors and marines under Combined Task Force 158.

Ships in the task force keep out unauthorized vessels from a warning zone with a perimeter of nearly two miles. They also conduct security sweeps on the tankers before they pull up to the oil platforms.

Among those helping with security patrols and sweeps is the USS Sirocco, a U.S. Navy patrol coastal ship that, before Sept. 11, 2001, was used primarily to get SEALs closer to shore for special operations. Its crew of 30 arrived in September from Norfolk, Va., for a six-month deployment, said the ship&#8217;s commander, Lt. Orlando &#8220;Scott&#8221; Bowman.

Sirocco sailors use both radar and high-powered binoculars on deck to monitor activity in the area. Vessels entering the warning zone must identify their name, destination and cargo. Only ships approved to use the oil terminals can enter the 1&#188;-mile exclusion zone and the terminals.

The Sirocco uses radio communications and a long-range acoustic device that plays tracks in Arabic and Farsi to unidentified ships that stray into the warning zone: &#8220;I need you to go starboard or to port because you could be coming into danger,&#8221; one alert might boom.

Inside the exclusion zone, deadly force is authorized for use on unidentified ships for self-defense purposes.

&#8220;If an unidentified vessel continues to close [on] the [oil platform] and does not adhere to any warnings, deadly force may be used,&#8221; said Royal Australian Navy Lt. Cmdr. Tish Van Stralen, CTF 158 legal officer.

Sending a messageEven U.S. and coalition ships need clearance to enter the &#8220;kill zone,&#8221; as one sailor called it while sitting in a U.S. Coast Guard inflatable boat in the gulf at dusk.

Abu Musab al-Zarqawi, the leader of al-Qaida in Iraq who was killed in June, claimed responsibility for an April 24, 2004, oil terminal attack that killed two U.S. Navy sailors and one U.S. Coast Guardsman and maimed several other people.

The coastal patrol boat USS Firebolt was sent to intercept an unidentified cargo dhow as it approached the Basra terminal.

At about the same time, two speedboats launched an attack on the Basra terminal. Security forces disabled the boats and killed the people on board, Lockwood said. Neither terminal was damaged but both were shut down for 24 hours at a cost of $28 million in lost oil revenue, according to news reports.

But so far there have been no more attacks.