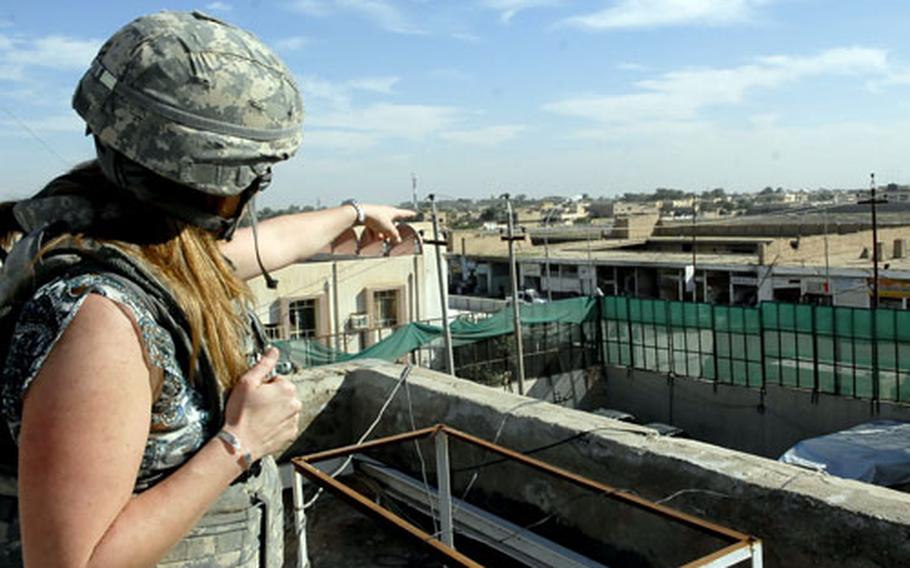 Carrie Giardino, who works on women’s issues and governance for the Diyala provincial reconstruction team, points to where a female suicide bomber killed 11 people in October. (Heath Druzin / S&S)

BAQOUBA, Iraq &#8212; A woman clad in a black head-to-toe abaya walks with determination toward an Iraqi police Humvee. As the man she was following sprints away across the street, an explosion sends a fireball high into the air, shredding the vehicle.

The chilling surveillance videotape of the Oct. 8 bombing, in which 11 people were killed, shows one of the latest examples of a grim trend in Diyala province that has brought unwanted attention to the area.

"They don&#8217;t want to be known as the province that has women blowing themselves up," said Carrie Giardino, who works on women&#8217;s issues for the U.S. provincial reconstruction team in Diyala.

Suicide bombings are nothing new in Iraq. But poverty, sectarianism and families broken by violence have helped make Diyala the unofficial capital of female suicide bombers.

Now U.S. forces and Iraqi police are searching for ways to combat the trend.

The province has had more than 20 such bombings in the past year, including one per week in June, far more than any other province, according to U.S. officials.

The pace had slowed recently, but on Nov. 10 a woman blew herself up in downtown Baqouba, killing four people.

The loose-fitting abaya that many Iraqi women wear is a perfect place to hide a bomb.

"There&#8217;s no way to tell if a woman is pregnant under there or packing 50 pounds of explosives," said Giardino, who works in Baqouba&#8217;s heavily fortified Diyala Government Building.

Compounding the problem is a lack of female police officers available to search women, so most women have just walked through checkpoints.

U.S. forces have been recruiting women to work at checkpoints as part of the "Daughters of Iraq," a female version of the "Sons of Iraq," a campaign widely credited for reducing violence across Iraq in the past year. The Iraqi police have also graduated 49 female officers in the past two months, though this is still a small fraction of the total force, said Iraqi police Col. Ragheb Aumeri.

Police in Diyala are also trying to purchase thermal cameras that can detect bombs without a hands-on search.

The new strategy paid off early: In August, a female searcher at a checkpoint caught a 15-year-old girl with a suicide vest and Iraqi police were able to safely disarm the bomb.

That girl, Rania al-Anbaqi, remains in police custody on terrorism charges. She says she was duped into carrying the bomb by two women working for al-Qaida and her extremist husband, though police are skeptical of her account.

In October, Iraqi authorities said they arrested a 38-year-old woman, Ibtisam Adwan, who was suspected of overseeing the recruitment of female suicide bombers and training Rania, according to CNN and other news sources.

Poverty and sectarianism help drive the recruitment of female bombers, with insurgents paying women to groom the bombers, and families of bombers getting money after the operation, Giardino said. With grinding poverty, few job opportunities for women and many left widowed by violence, it is a tempting proposition for many, Giardino said.

Each month, the provincial reconstruction team hosts a conference on women&#8217;s issues, offering Iraqi women a chance to talk about their problems in a safe environment and explore job opportunities. The next conference will specifically address female suicide bombers.

High-profile women are speaking out on the issue in Diyala.

The female host of a popular local radio show has been outspoken in her condemnation of the practice and regularly urges women to resist being recruited.

Muna Saleh Mahdi, a member of the Iraqi parliament who is from Diyala, has made women&#8217;s rights a top priority and speaks out against suicide bombings.

A more intractable problem is the continued mistrust between the province&#8217;s majority Sunnis and minority Shiites.

It has been especially pronounced in the provincial capital of Baqouba, which has an ethnically mixed population and a Shiite-dominated police force.

It is no accident that police have been the main targets of Sunni bombers, Giardino said.

"Sectarianism is still alive and well."