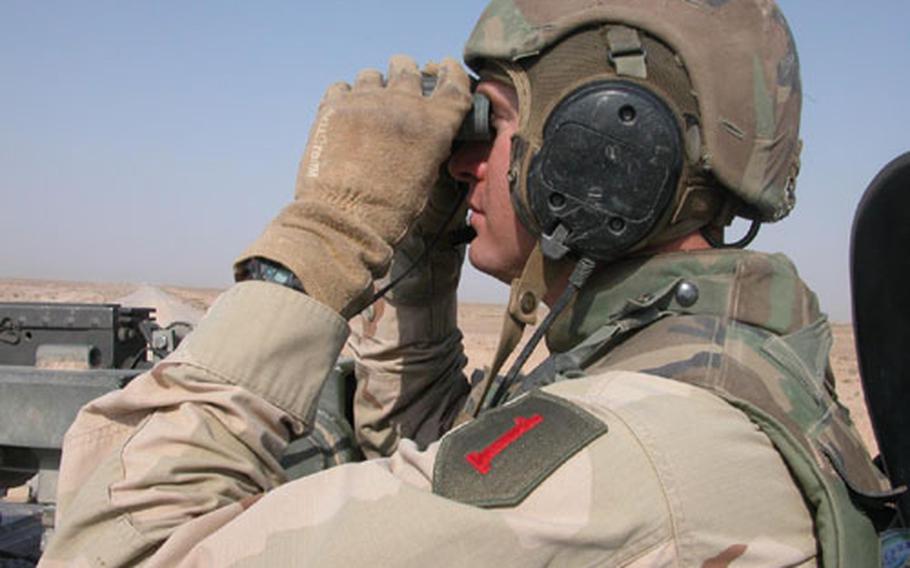 Capt. John Trylch, commander of the 1st Squaron, 4th Cavalry’s Troop B, from Schweinfurt, Germany, scans for suspicious activity while on a recent mission to clear a route that the Army calls Grape, considered among the most dangerous roads in Iraq. (Lisa Burgess / S&S)

It sounds so innocent.

But while the name has no meaning &#8212; it&#8217;s just one of those odd names the military has a habit of assigning things &#8212; Grape is at, or near, the top of the list of most dangerous roads in Iraq, according to Capt. Nathan Springer, personnel officer and acting spokesman for the 1st Squadron, 4th Cavalry Regiment at Forward Operating Base McKenzie.

ASR Grape runs almost within spitting distance of Samarra &#8212; so close, in fact, you can clearly see the sacred dome of the city&#8217;s historic mosque.

And Samarra, which is part of the 1st Infantry Division&#8217;s area of responsibility, has posed some serious problems.

After some terrifically bloody fights this spring, the city is now under the control of insurgents.

Not a single coalition unit has a permanent contingent stationed there.

In fact, until just last week, any coalition element that went into the city was virtually certain to be attacked, 1-4 Cav officers said.

The situation in Samarra appears to be calming down, as coalition and Iraqi government officials have peacefully entered the city in the past few days.

Still, a secondary condition of having no well-established coalition or Iraqi government presence in Samarra is ASR Grape.

Four of the soldiers who were killed were from the 1-4 Cav, including a soldier with Anvil Platoon, and one with Headquarters, Headquarters Troop. Two other soldiers were with the 1st ID&#8217;s 216th Engineers.

It took a few months for the situation on ASR Grape to develop, according to Capt. Scott Synowiez, the 1-4 Cav&#8217;s intelligence officer.

Synowiez said that, at first, the 1-4 Cav and other users of ASR Grape were facing the usual danger &#8212; roadside bombs, also known as improvised explosive devices, or IEDs.

Then, about the first week of May, supply convoys began getting attacked.

Insurgents also began taking advantage of the dry season and the shifting dirt and sand to begin laying mines, including deadly anti-tank mines.

The division could not simply bypass Grape and use an alternative route, the way coalition forces often do in Baghdad when a street gets &#8220;hot.&#8221;

That&#8217;s because the division&#8217;s area of responsibility is a barren desert, with only two major roads that link the forward operating bases in the region.

While neither road is in any way ideal, Grape is a more direct route &#8212; by many, many miles &#8212; than the other road, according to unclassified maps of the area.

So Grape has to be kept cleared, not only for coalition forces but also for Iraqis, who bear the brunt of road crimes such as carjacking, 1-4 Cav leaders agreed.

But Trylch told Stars and Stripes that &#8220;this is probably three times more dangerous than the [other] missions I&#8217;ve been asked to do here,&#8221; which included Baqouba when the fighting became hot down there.

As Trylch was riding back to the base with his dead soldiers, his vehicle also was hit with an IED.

In the afternoon, the scouts, in their Bradley fighting vehicles, would continue their reconnaissance while Trylch and some of his tanks visited a tiny outpost known as FOB Rex.

All the soldiers, who gathered in the cool of the early morning, had done between 70 to 80 similar missions, Trylch said. And almost every single one had personal experience with IEDS, or worse, he said.

Most of the soldiers listened quietly, faces unreadable. But one soldier knelt on one knee in the sand. One sunburned hand covered his eyes.

Everyone pretended not to notice except a buddy, who gently patted his shoulder.

Less than a month ago, many of these same men had seen two of their friends die. They all knew the fury of battle and the taste, sound and smell of death.

After Trylch&#8217;s briefing, the soldiers turned purposefully for their vehicles.

Most armor or cavalry units give their tanks names, and Army tradition says the name must begin with the letter that designates the vehicle&#8217;s company, or in the case of the cavalry, its troop.

But just how beautiful your day will be is determined by whether you are looking over the main gun or straight down the barrel.

As the vehicles left McKenzie, the scouts moved out in front and soon disappeared down Route Lindsey in a cloud of choking dust.

Standing in his commander&#8217;s hatch, goggles already covered with dust, Trylch pointed out the first notorious &#8220;kill zone,&#8221; close to the intersection where Lindsey turns off onto Grape.

It was a tense few minutes. Every mound of dust, large piece of trash or empty can could mean serious injury or death.

But when the forces turned onto Grape itself, the level of tension rose even higher.

There was little civilian traffic on the road, and any that was seen was instantly suspect. Was that Iraqi whose car was sitting on the small bridge having a breakdown? Was the man who stopped trying to help him, or was it a set-up for an ambush? Why was that large, lone rock sitting there on the side of the road with nothing else beside it? Were the three shots heard in the distance someone hunting, or a signal to attack?

Finally, as the afternoon waned, Trylch went looking for the local village elder.

The captain hoped to strike a deal: Coalition forces would help rebuild the road and repair the local mosque, if the Iraqis would let coalition forces know when &#8220;bad guys&#8221; were in the neighborhood.