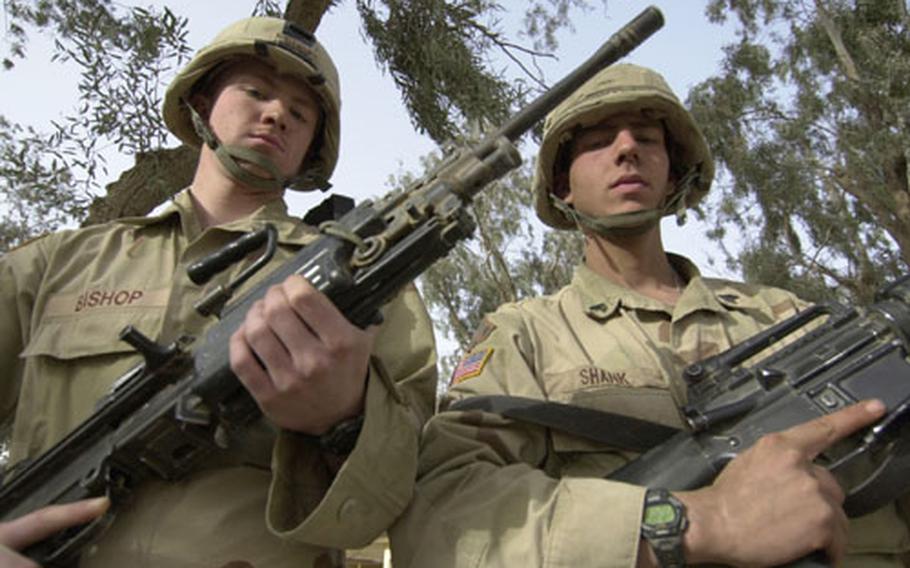 Pvt. Dan Bishop and Sgt. Erik Shank were involved in the operation that captured and detained 22 Iraqis during a raid in Baquba. (Jim Schulz / S&S)

BAQOUBA, Iraq &#8212; The U.S. Army has broken a terror ring suspected of paying foreign terrorists for attacks in Iraq.

Wednesday&#8217;s operation resulted in the detention of seven of those targeted, all Wahabi extremists with links to al-Qaida terrorist Abu Musaab Al Zarkawi, who is suspected of planning attacks in Iraq.

&#8220;We got a money-man, an organizer and several operatives, but we missed four targets who were not home,&#8221; Adamson said.

&#8220;Later that day one of those individuals, who was actually a go between to al-Qaida, was picked up in his vehicle in Baqouba by [U.S. forces],&#8221; Adamson said.

Receipts and other information seized during the operation showed the terrorists were taking money out of Iraq to make a series of $20,000 payments to foreign nationals, officials said.

The Army suspects the payments were for terrorist attacks already carried out in Iraq or seed money for future attacks.

Three computers and some computer disks also were seized and are being searched for information. The people detained are being questioned and will be sent to &#8220;higher headquarters&#8221; for further interrogation, Adamson said.

The other Iraqis detained also will be questioned to find out why they were associating with suspected terrorists, Adamson said.

After the raids, coalition forces surrounded a housing area in Baqouba while Iraqi police searched 210 houses. The police confiscated 33 AK-47s, a sniper rifle, three pistols and a large quantity of ammunition.

Task Force member, Pvt. Dan Bishop helped search one of the houses in Baqouba during the raid, and two Iraqis on the target list were found.

Bishop covered the men with his M-249 Squad Automatic Weapon, making sure they did not talk or move.

Adamson and his soldiers are responsible for security in Baqouba and adjacent city Buhritz with a combined population of 400,000.

Since April, the Task Force has been based at the 41st Nebakanzer Republican Guard Division headquarters, a sprawling area littered with abandoned Iraqi tanks, vehicles, bunkers, anti-aircraft guns and shattered buildings.

Baqouba is in the heart of the Sunni triangle and former Saddam loyalists are organizing attacks there, Adamson said.

&#8220;We routinely have rocket and mortar attacks and we have had five vehicle-born IEDs (Improvised Explosive Devices). Mosques, police stations, and coalition forces are targeted,&#8221; Adamson said.

Terrorists are targeting Baqouba because of the coalition&#8217;s success assisting the local police and the Iraqi Civil Defense Corps there, he said.

That makes serving in the area dangerous.