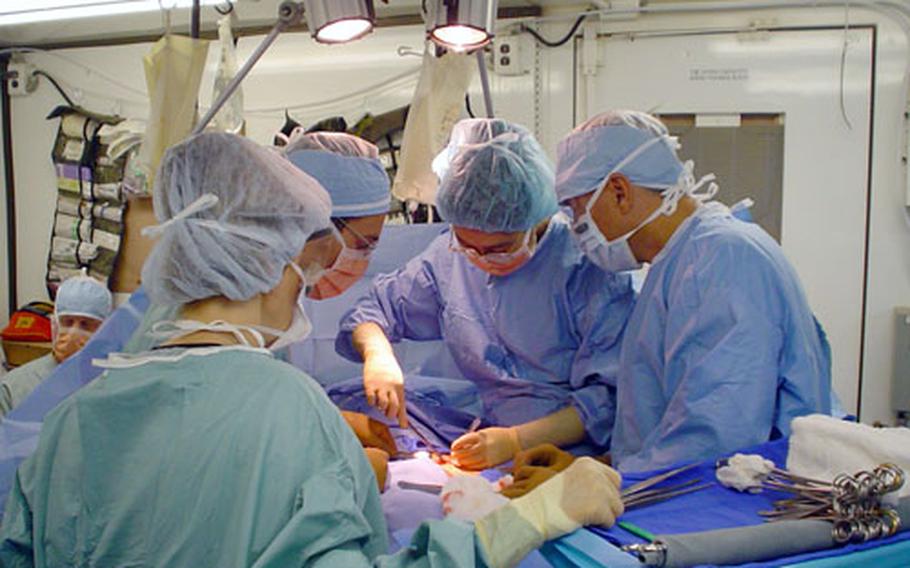 Maj. Li-ing Chang, center, a general surgeon at Misawa Air Base, operates on a patient at Camp Sather in Baghdad International Airport, where she was deployed this spring for three months. (Courtesy of USAF)

Maj. Li-ing Chang, center, a general surgeon at Misawa Air Base, operates on a patient at Camp Sather in Baghdad International Airport, where she was deployed this spring for three months. (Courtesy of USAF) 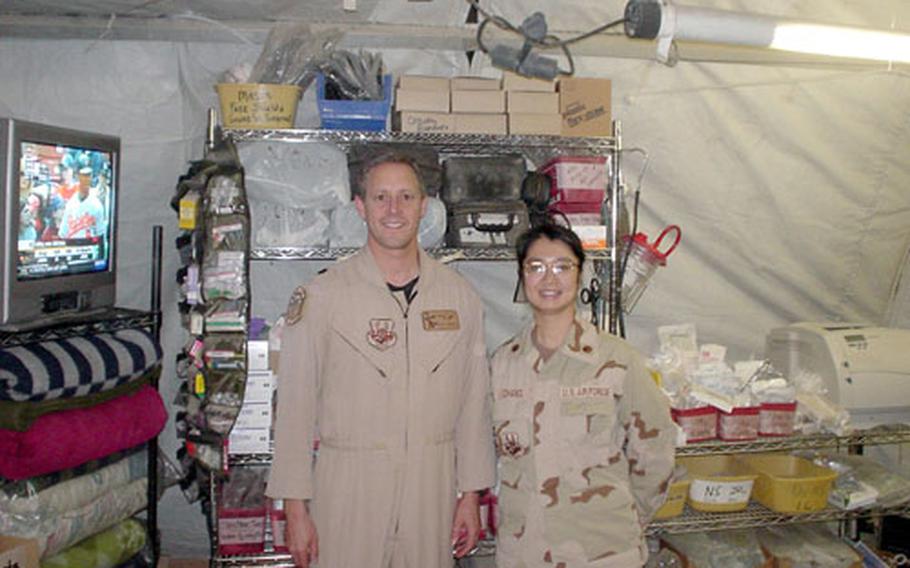 Lt. Col. Mark Coakwell and Maj. Li-ing Chang of Misawa&#39;s 35th Medical Group deployed to Camp Sather in Baghdad this spring, where they were part of an Air Force Expeditionary Medical Squadron that treated more than a thousand patients in three months. Many of the injured were soldiers wounded in battles or by roadside blasts in and around Baghdad. (Courtesy of USAF) 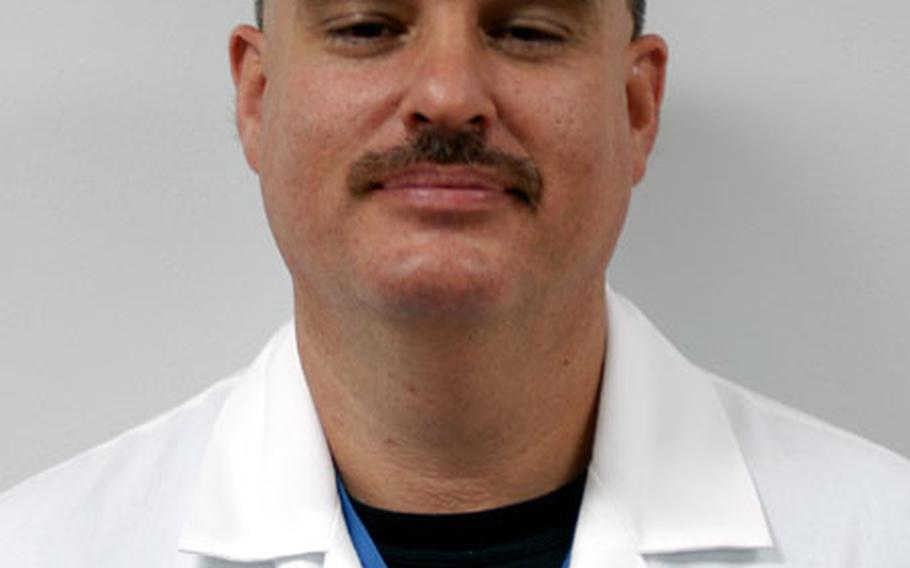 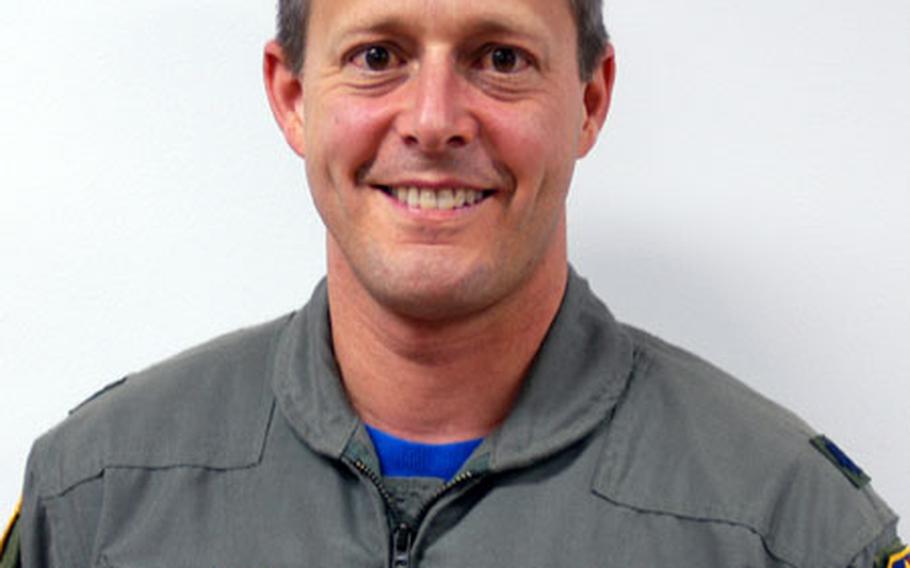 MISAWA AIR BASE, Japan &#8212; Before he deployed to Iraq in March, Lt. Col. Mark Coakwell&#8217;s most exciting combat experience was watching fighters take off with bombs for war.

That all changed this spring, when Coakwell and Maj. Li-ing Chang, a general surgeon at Misawa, deployed to Baghdad for three months on an Aerospace Expeditionary Force rotation.

The doctors were thrust into the heart of battle, where the wounded showed up at their tent by the hundreds and writing death certificates for young soldiers was part of the job.

All three operated and slept in flak vests, routinely &#8220;hit the deck&#8221; for cover, stabilized patients with limited supplies and equipment and kept their cool under fire.

The wounded ranged from U.S. soldiers injured in roadside blasts to an Iraqi father and two boys hurt throwing grenades at a U.S helicopter. The Misawa team also treated Iraqi detainees from a nearby prison, coalition troops and foreign diplomats.

Air Force medical personnel typically &#8220;tend to be back out of the major action&#8221; on deployment, said Coakwell, speaking from his own experience &#8212; seeing patients with colds or stomach viruses, not blast wounds.

&#8220;You just see the routine day-to-day stuff; you don&#8217;t see the battle injuries, so this was a very unique experience for me from a medical standpoint,&#8221; Coakwell said.

Expeditionary medical support &#8212; commonly referred to as EMEDS &#8212; lets Air Force medical personnel get close to the battle. The concept for the service&#8217;s lightweight field hospital evolved after Operation Desert Storm, when the Air Force saw a need to get its medical folks to the fight faster.

The Misawa team was part of a smaller EMEDS unit designed &#8220;to travel with the attacking front,&#8221; Chang said. Its entire operating room packs up into one pallet and five backpacks, to be carried by a five-member surgical team, she said.

About 30 active-duty, National Guard and Reserve personnel made up the Camp Sather EMEDS. The unit&#8217;s roster included nurses and flight surgeons, an emergency room physician and specialists including a clinical psychologist, orthopedist and anesthetist.

The group was responsible for the medical care of the almost 2,000 Air Force personnel based at the camp.

Coakwell also oversaw preventative-medicine programs for more than 25,000 people at the surrounding Army camps near the airport, he said, entailing everything from food safety to pest prevention.

Patients with minor afflictions regularly shuffled into the EMEDS&#8217; tents. Some just had the sniffles, others were dehydrated or overheated; more than a few had cuts, bruises, sprains and various infections.

But the EMEDS doctors and nurses always had to be ready for the battle wounded, who often arrived without notice and in multiples.

The Camp Sather EMEDS was designed to receive one to two critically ill patients who could be treated right away. When more arrived, it required quick thinking &#8212; triaging patients &#8212; and improvisation: The Morale, Welfare and Recreation tent was converted into a patient ward.

In e-mails from Baghdad that Chang wrote to co-workers at Misawa, she described those busy times: &#8220;Around midnight, someone came in with a partial left arm amputation and blast injury to the left chest. We were in the operating room all night again. We did a shoulder amputation. &#8230; We went through 10 units of blood and got him on a plane within one hour of surgery stop time. That&#8217;s 3 nights in 4 that we were operating 8-12 hours.&#8221;

The most common injuries were to extremities &#8212; arms, legs, feet and neck &#8212; areas not protected by body armor, Coakwell said.

Terracciano, who at Camp Sather was in charge of the nurses and medical technicians, told of one soldier who lost a foot when someone lobbed a grenade inside his Humvee. &#8220;He fumbled trying to throw it out the door. It fell at his feet.&#8221;

The goal in treating the seriously injured was to stabilize them so they could withstand medical air evacuation or ground transport to a safer and larger hospital, the Misawa team said. The EMEDS unit didn&#8217;t have the room or the equipment to administer more extensive care. Sometimes, soldiers &#8212; lucky in the sense, at least, that they were spared more crippling wounds &#8212; returned to the field. &#8220;Fix &#8217;em up and send them back,&#8221; Chang said.

While caring for patients, the EMEDS doctors and nurses had to watch out for their own safety. Flak vests were required gear, except for in the shower and while sleeping. The camp was hit multiple times by rocket-propelled grenades.

In one of her e-mails, Chang wrote: &#8220;Wow, what an exciting few days. First, on Sunday morning, we were attacked by rockets. Fifteen rounds hit the airport. One landed near the EMEDS tent, but luckily did not detonate. We all evacuated in a hurry. We spent a better part of 5 hours in the bunkers.&#8221;

Nobody in their camp was injured from any of the attacks, Coakwell said.

While they felt the drills prepared them for the real thing, the two can&#8217;t be compared, they added.

Chang, Coakwell and Terracciano said they left Baghdad with vivid memories, lingering questions and a desire to go back.

One of Terracciano&#8217;s fonder memories is learning how to drive an Army Abrams tank, a form of wartime recreation that helped him decompress from the intense working environment.

He gets choked up when talking about the U.S. military police killed when some Iraqis lobbed rockets into Abu Ghraib prison.

Coakwell will never forget the Baghdad morgue and writing out death certificates.

Chang said what stood out for her was the bravery and spirit of those on whom she operated, of men who looked like kids &#8220;that I thought should be home playing football,&#8221; she said.

Would they do it again?