Iraq projects focus on getting clean water out of the ground, to the people 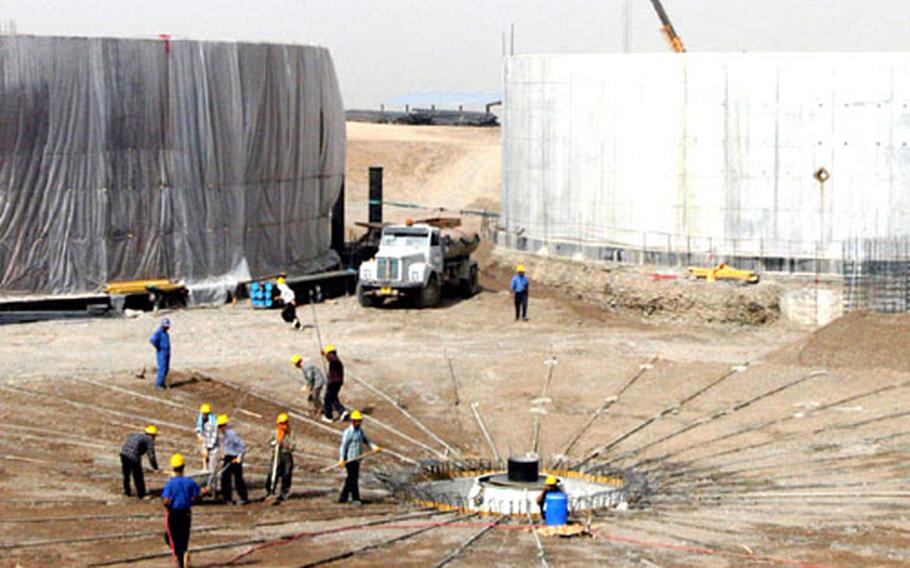 A crew works on the sixth clarifying tank at the Ifraz Water Treatment Plant. The tanks cause heavy debris in water pulled from the Zab River to settle before the water is pumped through a fine sand and charcoal filter. (Rick Emert / S&S)

A crew works on the sixth clarifying tank at the Ifraz Water Treatment Plant. The tanks cause heavy debris in water pulled from the Zab River to settle before the water is pumped through a fine sand and charcoal filter. (Rick Emert / S&S) 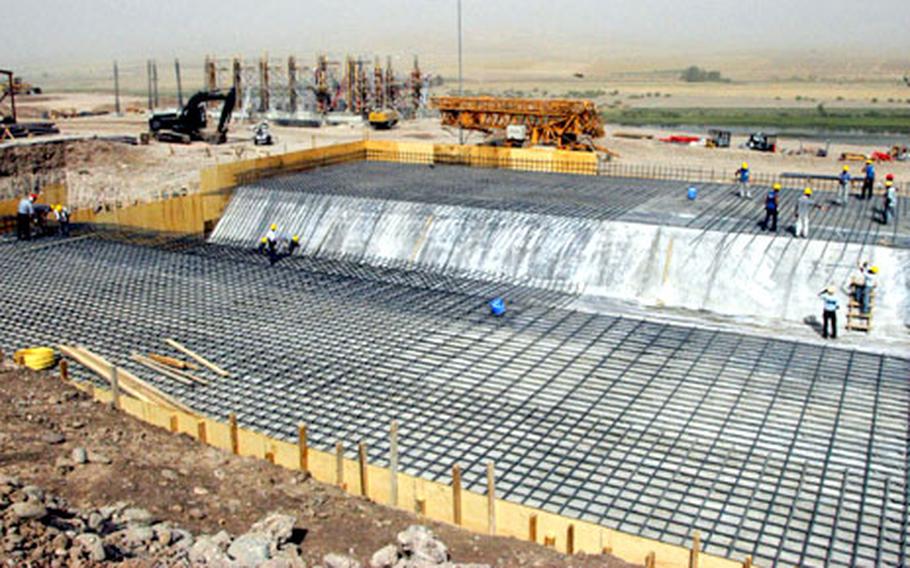 Work progresses on the foundation of the sand and charcoal filtering system Monday at the Ifraz Water Treatment Plant. (Rick Emert / S&S) 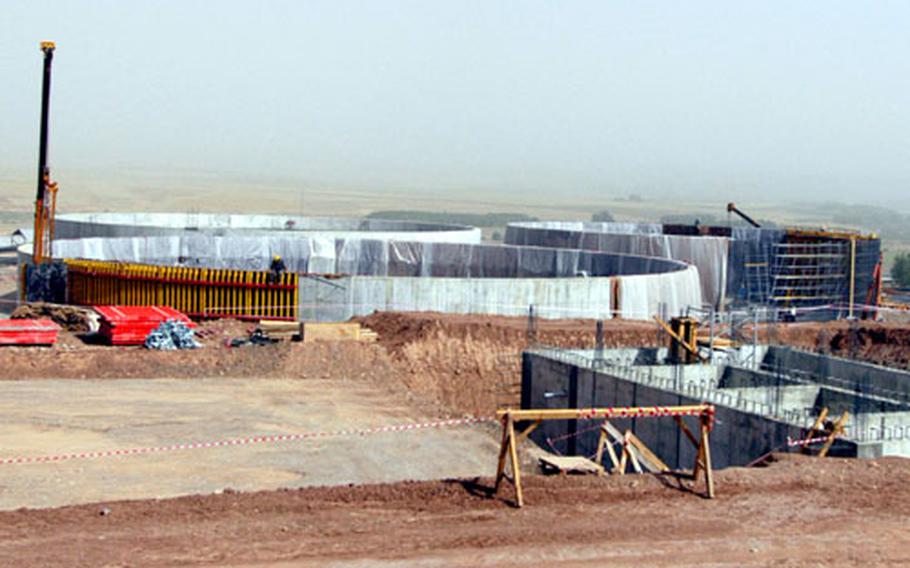 (This is part of an occasional series on reconstruction in Iraq)

IFRAZ, Iraq &#8212; In Iraq, where even water that comes from the tap could be contaminated with chemicals or sewage seeping into the ground, clean water is the most basic need of people throughout the country.

While there is an adequate supply of bottled water, water for cooking, cleaning and bathing is a precious commodity. In many cases, wells have not been dug deep enough to go below the contaminated ground water.

Under the $18 billion Iraq Reconstruction Program, 184 public works and water projects are planned, including 158 water treatment facilities, two sewage treatment plants and 11 water resource projects. The Corps of Engineers and Project Contracting Office program contracts the work out to local laborers, with the Corps of Engineers Gulf Region District overseeing the construction.

Tracking the availability of clean water throughout Iraq is a difficult task. The Brookings Institution&#8217;s &#8220;Iraq Index,&#8221; a vast resource of reconstruction information, tracks fuel production, oil revenues, electrical power production, inflation, the number of Internet subscribers in Iraq, and the nationwide unemployment rate, among other stats. But it has no water index.

The World Bank estimates Iraq&#8217;s &#8220;agriculture and water resources&#8221; reconstruction needs at more than $3 billion. According to the World Health Organization, only 46 percent of rural Iraqis have access to clean water.

A massive $125 million water treatment plant in Ifraz will pump treated water about 20 miles southeast to the more than 900,000 residents of the city of Irbil, said Gary York, construction representative for the Irbil Resident Office, Corps of Engineers Gulf Region North.

The site, which sits on the bank of the Zab River, looks quite out of place on the dry, hilly landscape dotted with bushes and patches of trees. Although the region in northern Iraq is not as arid as other areas, treated water is just as rare.

Two of the six giant, cylindrical, concrete clarifying tanks were nearly complete on Monday, and on another nearly half of the concrete had been poured.

Overall, the clarifying tanks were about 40 percent complete. Construction began in mid-June, according to Jack Wilkerson, Corps of Engineers project engineer at the site.

When complete, the plant will pull water from the Zab River into a tank where it is pumped through the clarifiers to remove heavy debris. The water then is pushed through a filter of fine sand and charcoal before moving along 20 miles of pipeline at a rate of 1.6 million gallons per hour to a 5.2-million-gallon storage tank in Dawajin, which lies about three miles east of Irbil.

From Dawajin, which sits higher than Irbil, gravity carries the water to the residents of Irbil.

The project was supposed to be complete by December and operational by March, but the original contractor was dropped because of nonperformance, according to Wilkerson.

About 300 workers for the contractor Fluor had brought the construction nearly back up to schedule, Wilkerson said.

Fluor would not allow its contractors or workers to speak to Stars and Stripes about the project.

To the east in Sulaymaniyah, which falls under the Kirkuk Area Office of the Corps of Engineers Gulf Region North, there were a couple of small water distribution projects in the city, but nothing as large as the Ifraz plant.

Donna Street, Kirkuk area engineer, said that many of the Corps of Engineer projects will provide a foundation that the Iraqi ministries will have to build upon.

PREVIOUS STORIES:August 11, 2005:Workers out for power in northern Iraq

August 6, 2005:In Iraq, progress has been slow on construction of key border forts