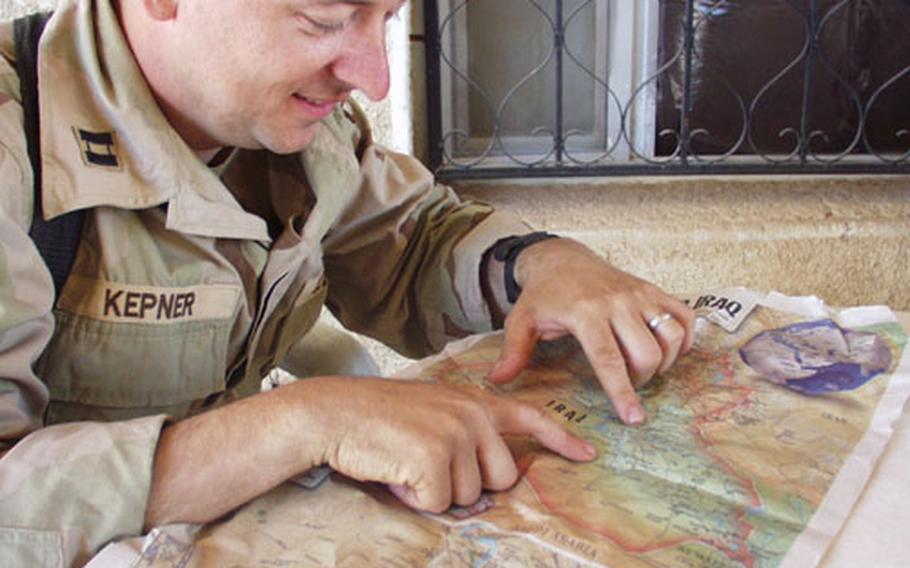 Army Capt. Mike Kepner, commander for V Corps headquarters and headquarters company, shows on a map the route he and his staff took as they kept supplied and moved the forward headquarters element of V Corp in the fighting across Iraq. (David Josar / S&S)

VICTORY CAMP, Iraq &#8212; There is a story of a replacement engine pulley made from a Meals Ready to Eat box and duct tape.

There are others about a commandeered fuel truck and a fan belt made from a length of a parachute cord.

The stories may sound far-fetched, but they show the spirit of inventiveness that is keeping the military moving in Iraq.

&#8220;You wouldn&#8217;t believe some of the things these soldiers thought up to keep us going,&#8221; said Army Capt. Mike Kepner, company commander for V Corps headquarters and headquarters company.

As the 3rd Infantry Division moved into Iraq on March 21, part of the V Corps HHC moved with them. The move was a logistics challenge that mixed ingenuity with craftiness.

Kepner and his soldiers had to get 118 vehicles, hundreds of soldiers and enough equipment to run the forward-deployed command post through the Iraqi desert and to the right place. And they had to do it repeatedly as the command post moved five times before ending up in Victory Camp outside Baghdad.

Although a large contingent of V Corps&#8217; main headquarters staff remained at Camp Virginia in Kuwait, the group that moved into the desert had the important task of directing the close-in fighting.

The first challenge was fuel. Kepner said his staff figured how much fuel they needed for vehicles and to run generators once they set up camp at their first objective in Rams, about 150 miles from where they crossed the Kuwait-Iraq border. They would need enough fuel for three days, they estimated. Kepner planned on 740 gallons.

But soon their supply was down to only 40 gallons, and Kepner&#8217;s staff went scurrying for fuel.

For two days they looked. Scout teams of logistics experts would drive into the desert searching for the necessary fuel to run the generators and vehicles.

Eventually a large U.S. military convoy was spotted. Kepner stopped it and got them to give him a 7,000-gallon fuel truck.

Much of those solutions came from the enlisted soldiers.

Macia said a challenge was always finding spare parts. He said coffee or another luxury item could be swapped or at least used as an enticement to get needed help.

At one point, Macia said, he drove nearly 90 minutes each way to an outpost in Iraq to get materials to fix broken equipment.

Other days he was scrambling to find coffee for V Corp officers or &#8220;sundry packs&#8221; of toiletries like baby wipes.

Because the forward-element moved so fast, it was often ahead of the traditional supply lines, said Army Cpl. Jerome Schorr, a V Corps supply clerk.

The convoy had initially packed a three-day supply of water and MREs, but Kepner opted to take rations for four more days and dumped extra tables, chairs and containers for hot food to make more room.

Overall the convoy had few major mechanical breakdowns, and only two trailers had to be abandoned, he said.

Most everything else was repairable.

And, yes, he said, once mechanics crafted an engine pulley from an MRE box and duct tape. And another time they made a temporary fan belt from parachute cord.