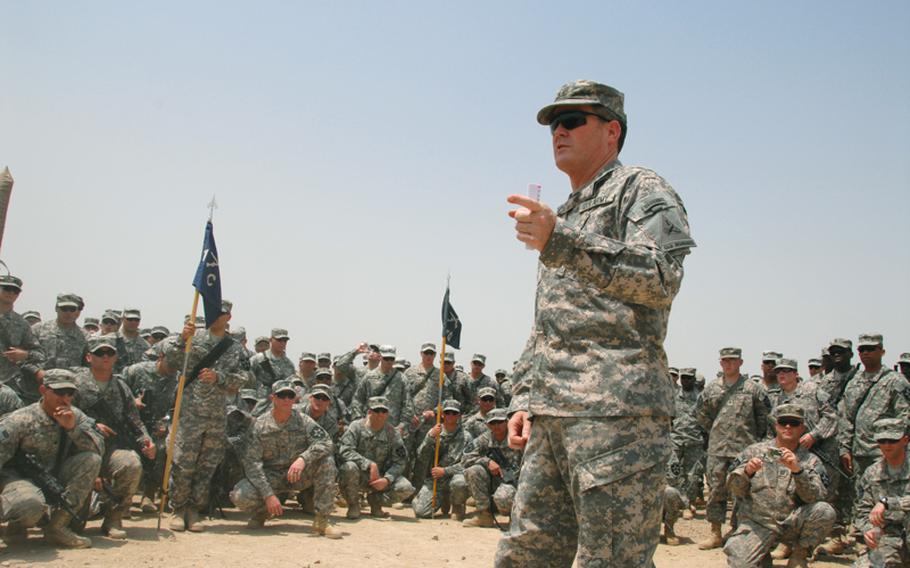 BAGHDAD &mdash; Five months of political deadlock in forming a national government has not crippled the country, the top U.S. military commander in the Baghdad area said Wednesday.

The Iraqi army is still getting paid and civil servants are still coming to work, despite March elections that left a two-seat difference in parliament between parties supporting current Prime Minister Nouri al-Maliki and former Prime Minister Ayad Allawi.

The country&rsquo;s ability to function in many ways rests on its ability to keep violent frustrations at bay, a balancing act the Iraqi security forces are winning, for now, Wolff said Wednesday during an interview on Camp Liberty.

That assessment comes at a crucial time, as Iraqi troops are set to take over full combat operations nationwide by Sept. 1.

&ldquo;As long as the Iraqi Security Force can continue to provide security, which I&rsquo;m confident that they can, then [the government] will get it done,&rdquo; he said.

The government will form, Wolff said, but on a time line Americans must accept.

&ldquo;It&rsquo;s on an Iraqi watch,&rdquo; Wolff told members of the 1st Battalion, 38th Infantry Regiment, part of the 4th Stryker Brigade Combat Team during an awards ceremony as the brigade prepares to go back to Fort Lewis, Wash. &ldquo;It tells time different from mine.&rdquo;

Violence still come in waves. Last weekend&rsquo;s assaults reportedly killed at least 69 people across the country, including a U.S. soldier who died in Baghdad on Saturday after an attack in Iskandariyah.

Wolff sees violence in central Iraq as an intimidation tactic against Iraqi forces rather than a well-organized campaign capable of disrupting government operations.

In 2005, Sunni leaders boycotted Iraq&rsquo;s elections, a move that shut them out of the fledging government and helped provoke a devastating insurgent rise.

Capt. Corbett Baxter saw that violent rise in late 2005 and 2006 in the farmlands north of Baghdad and the town of Abu Ghraib. Then a lieutenant, his battalion with the 4th Infantry Division lost 23 soldiers. He remembers seeing entire villages on the run, cars packed with people fleeing violence.

&ldquo;You had a lot of people who had a lot to gain from the violence,&rdquo; he said Wednesday, as he and his brigade wrap up its yearlong tour.

With this deployment, Baxter, 29, returned to those same canal-lined farms as commander of Company B, 1st Battalion, 38th Infantry Regiment within the Stryker brigade.

&ldquo;Farmers and families who are sick of fighting,&rdquo; he said. &ldquo;It smelled good going through the market [on this deployment]. Last time, all I smelled was death and garbage.&rdquo;

But the government, once it does form, has its work cut out for it, Wolff said.

&ldquo;The real issue that we get from talking to sheiks and other folks is that there&rsquo;s just a lot of business for the council representatives to get after, for the government to address,&rdquo; Wolff said. &ldquo;And I think the frustration that people have is that they elected a government &mdash; they want to see it get to work.&rdquo;