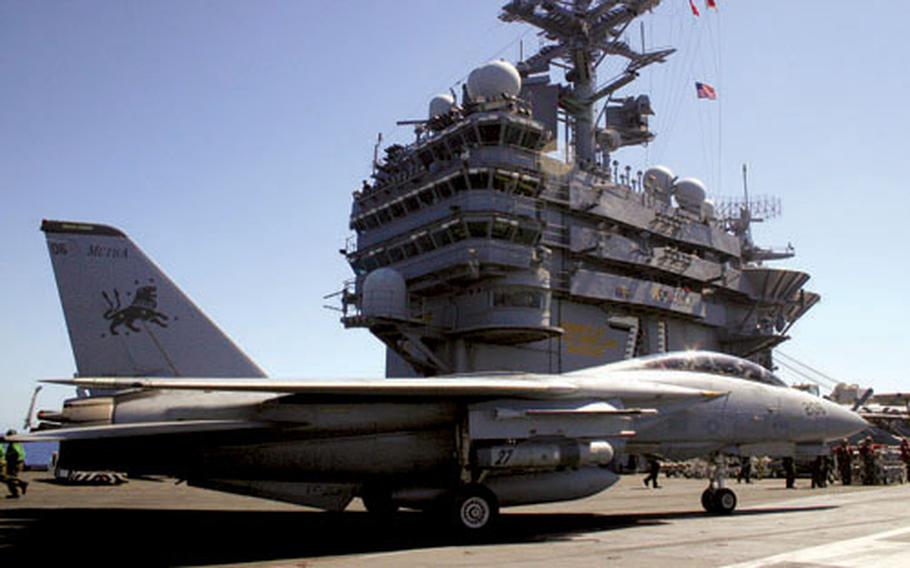 An F-14 Tomcat taxis by “the island” of the USS Theodore Roosevelt on Sept. 10, 2005, after landing moments earlier. The Tomcat is retiring for good after having flown its final mission in Iraq on Feb. 8. (Stars and Stripes)

The Navy announced Thursday that the last F-14 mission was completed Feb. 8, when two Tomcats landed aboard the USS Theodore Roosevelt after one dropped a bomb in Iraq.

Capt. William Sizemore, who flew on that last mission, said the Tomcat will be missed.

The F-14 entered operational service with Navy fighter squadrons VF-1 Wolfpack and VF-2 Bounty Hunters aboard USS Enterprise in September 1974, the Navy reported. The Tomcat&#8217;s purpose was to serve as a fighter-interceptor, and it eventually replaced the F-4 Phantom II Fighter, which was phased out in 1986.

Lt. Bill Frank also took part in the last mission, and is credited with being the last pilot to drop a bomb from an F-14 Tomcat.