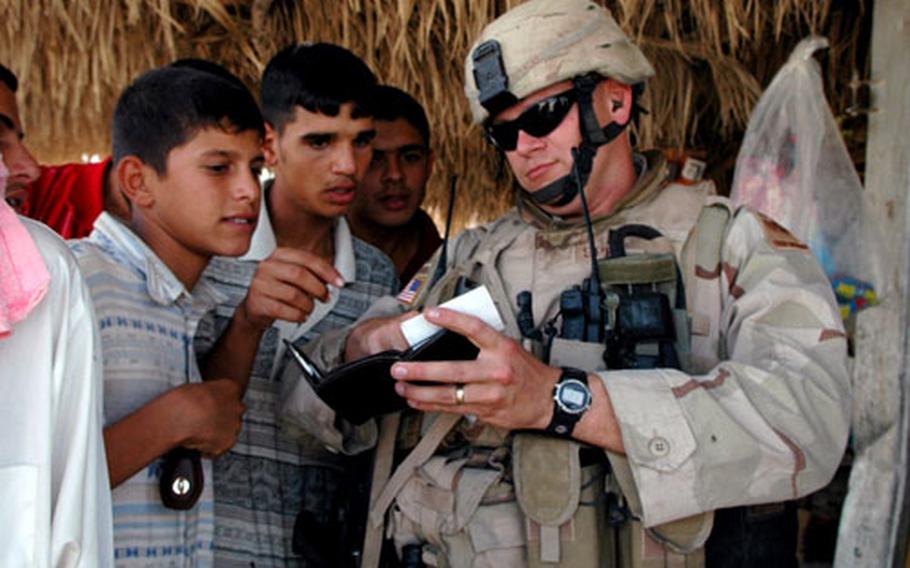 Locals in Mushada, Iraq, look at family photos from Capt. Gregory Spencer. Despite being open in their criticisms of Americans, many Iraqis have a playful relationship with U.S. soldiers. (Anita Powell / S&S)

Locals in Mushada, Iraq, look at family photos from Capt. Gregory Spencer. Despite being open in their criticisms of Americans, many Iraqis have a playful relationship with U.S. soldiers. (Anita Powell / S&S) 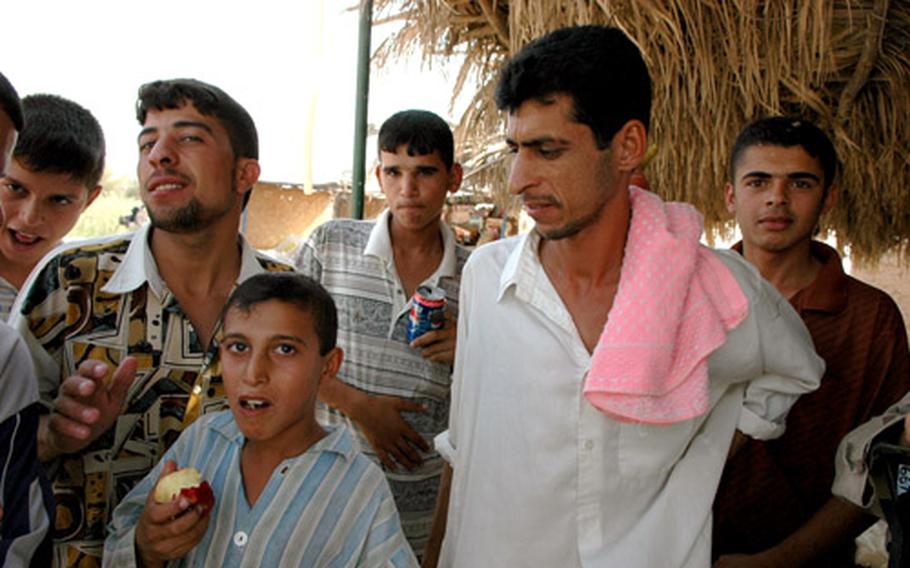 Amer Hussain looks at his son, Yasser Amer, 12. He said he hopes Iraq holds a better future for his son, but he doubts positive change will occur soon. (Anita Powell / S&S)

MUSHADA, Iraq &#8212; The morning after this area&#8217;s first free election in decades, optimism rolled back and the tide of frustration, suspicion and fear &#8212; in other words, life as usual &#8212; returned to this heavily Sunni region of Iraq.

While Army officials and civilians alike breathed a collective sigh of relief over the lack of major attacks on Saturday, all predicted Sunday that the area&#8217;s security problems won&#8217;t take a permanent vacation.

Leaders of the Fort Riley, Kan.-based 1st Battalion, 13th Armor Regiment, 1st Armored Division, which patrols the area, said they expect another upswing in activity in upcoming days. No major incidents were reported as of Sunday afternoon.

Yet, Iraqis and Americans alike said they believed Saturday&#8217;s Iraqi-run election was at least a small step in a positive direction.

Karim, like many in this region, said &#8216;no.&#8217; Like many Sunnis, he was deeply distrustful of the motives of what he described as a Shiite-authored document.

Most locals were not so optimistic.

Many expressed deep suspicion in the electoral process, in the election committee, in the proposed constitution, in the Iraqi government, in American forces, in the nascent Iraqi forces and &#8212; most disparagingly &#8212; in fellow Iraqis.

Mushada resident Hamid Ibrahim, 40, said he voted against the constitution draft. If it passes nationally, he said, &#8220;we are going to refuse our government. There will be no connection between us and our government.&#8221;

Many also said they held out little hope for positive progress from the attempt to bring democracy to Iraq.

Hussain referred to his own experience: He said he received a university degree in economics, yet could only find employment by setting up a ramshackle roadside store along an explosive-laced thoroughfare. He complained about the rash of bombings on the road &#8212; 1-13 Armor officials say they find about 40 bombs each month in the area &#8212; as they cut into his business.

In response, battalion officials at the scene noted the efforts they took to foster a peaceful atmosphere on election day, by patrolling the area and advising Iraqi officials on security issues.