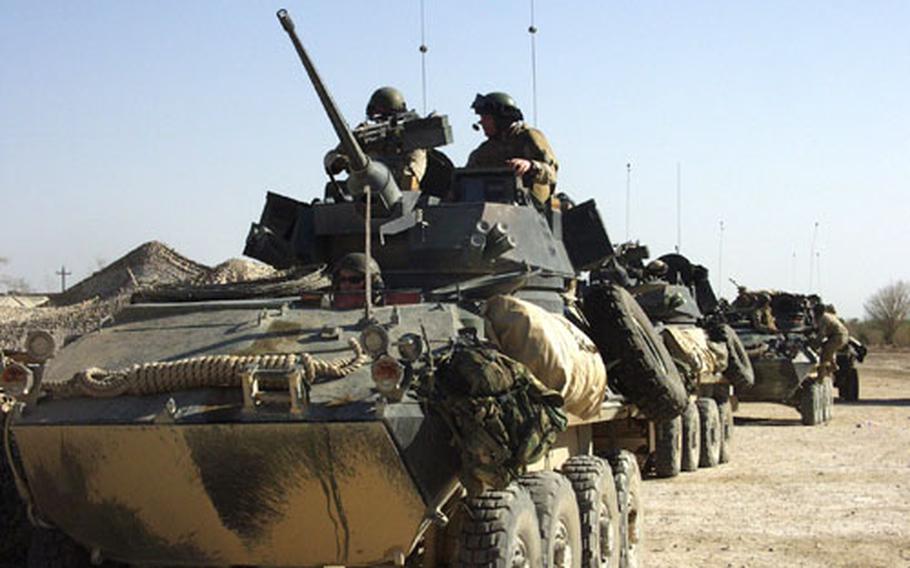 A platoon of Marines from Company D, 2nd Light Armored Reconnaissance Battalion, head out on Friday to patrol the main highway along the eastern edge of Fallujah, Iraq. Each of the Light Armored Vehicles, called LAV-25s for their 25 mm Bushmaster chain gun, carries seven Marines. (Charlie Coon / S&S)

A platoon of Marines from Company D, 2nd Light Armored Reconnaissance Battalion, head out on Friday to patrol the main highway along the eastern edge of Fallujah, Iraq. Each of the Light Armored Vehicles, called LAV-25s for their 25 mm Bushmaster chain gun, carries seven Marines. (Charlie Coon / S&S) 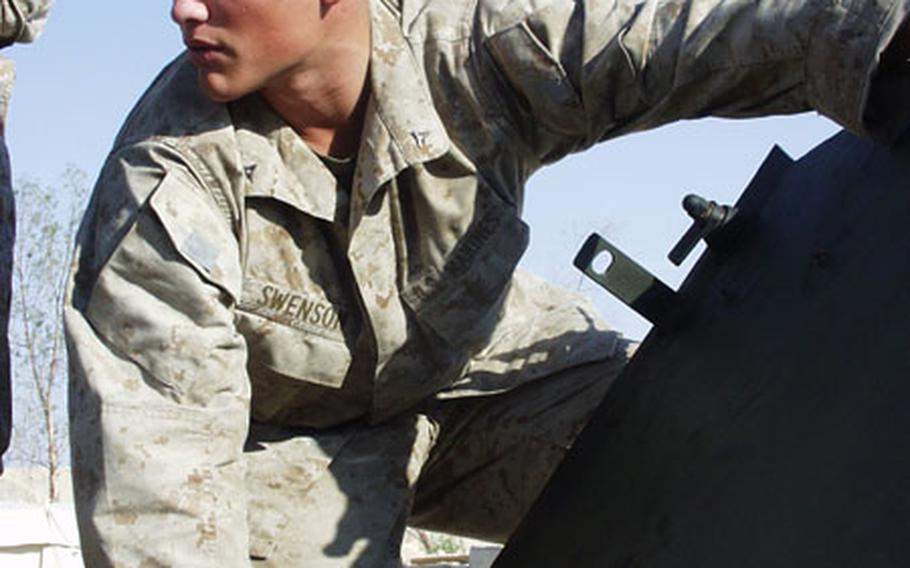 Lance Cpl. Brad Swenson of Company D, 2nd Light Armored Reconnaissance Battalion, checks the engine on his Light Armored Vehicle before heading out on a patrol of the highway on the eastern side of Fallujah. (Charlie Coon / S&S) 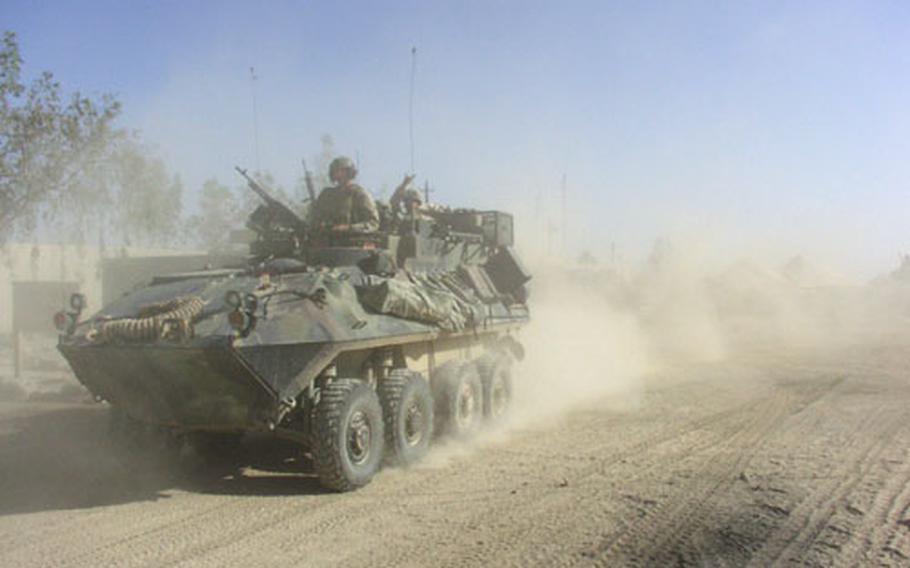 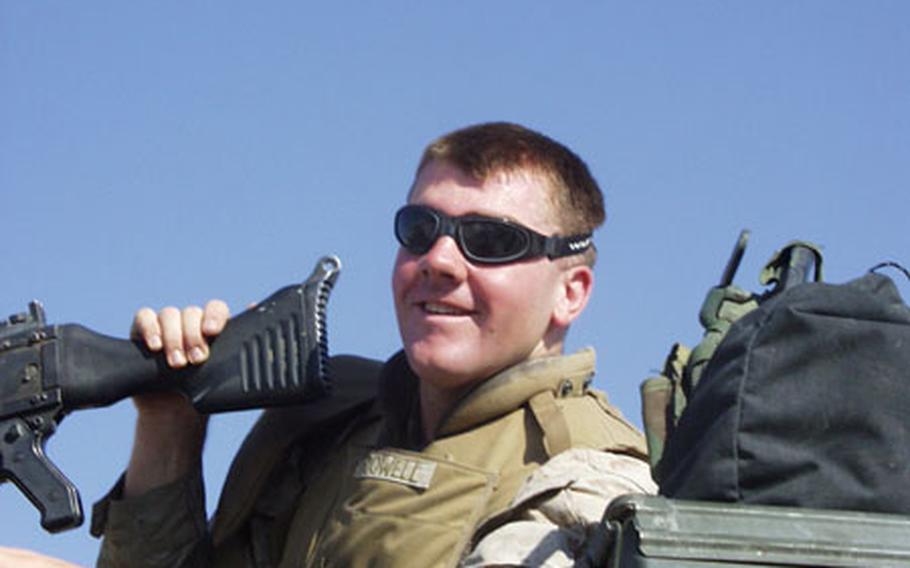 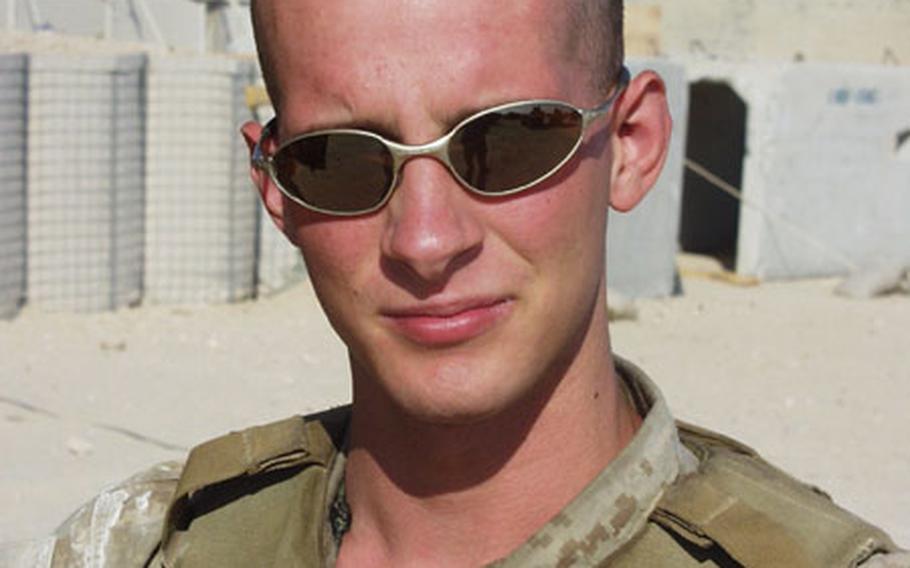 CAMP FALLUJAH, Iraq &#8212; The Marines were patrolling a highway east of Fallujah when they began taking fire. They doubled back and were shot at again.

The platoon pulled up along the highway and pointed its guns toward a truck stop and some men, who were dressed as civilians.

The guerrilla war in Iraq has forced the Marines of Company D, 2nd Light Armored Reconnaissance Battalion to think twice before they shoot. Armed insurgents blend in with everyone else, so U.S. troops use tactics to destroy the enemy while trying not to kill innocent people.

The enemy and the innocents both wear blue jeans and T-shirts or robes with headscarves. The only way to tell the difference is to find the ones with rifles cocked under their arms or rocket-propelled grenades hoisted onto their shoulders.

They&#8217;d been patrolling Route 1, the main supply route between Baghdad and Fallujah, for weeks without being fired upon.

The Marines fired back and soon gained &#8220;fire superiority,&#8221; where the enemy was ducking and the troops were able to maneuver. The platoon moved to a position where it was pointed toward the enemy fire but not at the houses in the distance or the cars on the highway.

They say the enemy is trying to goad them into coming into the city and the residential areas. The Marines didn&#8217;t take the bait.

For the moment, the platoons are not allowed to proceed into the city with their eight-wheeled killing machines &#8212; light-armored vehicles equipped with a 25 mm Bushmaster chain gun, two smaller guns and seven Marines trained to destroy.

Instead, they dismounted their LAV-25s and pushed the enemy back past the hide-and-seek dunes behind the truck stop and held their position. Some of the bad guys who ran away ditched their weapons and reappeared as innocents.

After several hours, 3rd platoon was relieved by 1st platoon, which took up the fight, moving slowly back toward houses from where enemy fire was coming.

Helicopters came in and destroyed a few houses from where rockets and mortars were being shot. The fighting on the eastern side of Fallujah continued into Thursday night and the weekend.

For Williamson, who finished boot camp in October and joined his battalion in January, it was his first firefight. He helped take out the enemy fighters and caused others to retreat.

&#8220;I was afraid we were going to get down to the nitty-gritty and I was going to freeze up,&#8221; he said. &#8220;It&#8217;s not something you want to do when you have [six other guys on your vehicle] worrying about you laying down fire or taking out the guy who is about to shoot an RPG at you.

The Marines know they&#8217;ll win almost every fight against the insurgents. Usually the score will be lopsided. On Thursday, members of 3rd and 1st platoons killed an estimated 20 members of the enemy but themselves suffered only a handful of minor shrapnel wounds.

Yet the enemy fighters kept showing themselves, only to be killed.

Yet the enemy runs for cover. Surely those men who were running must have wanted to live, Torok is told.