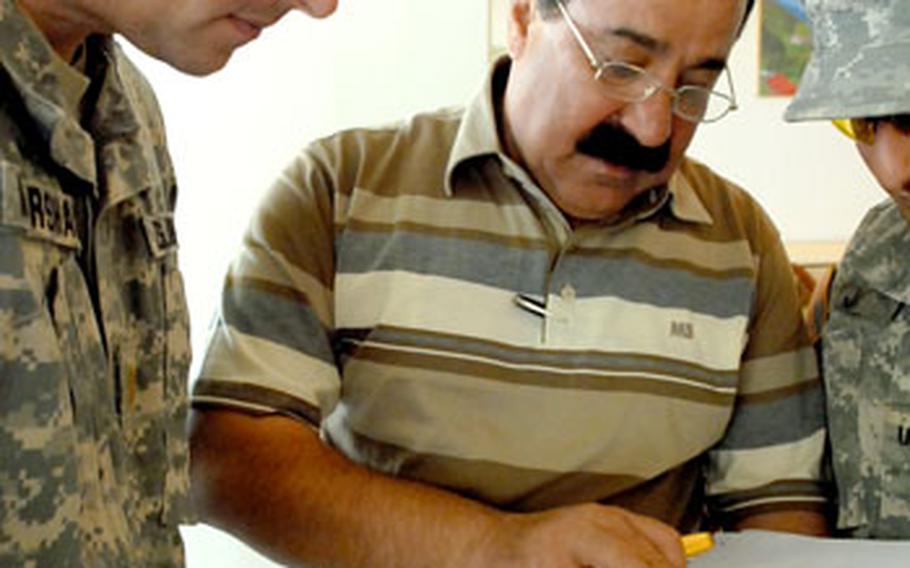 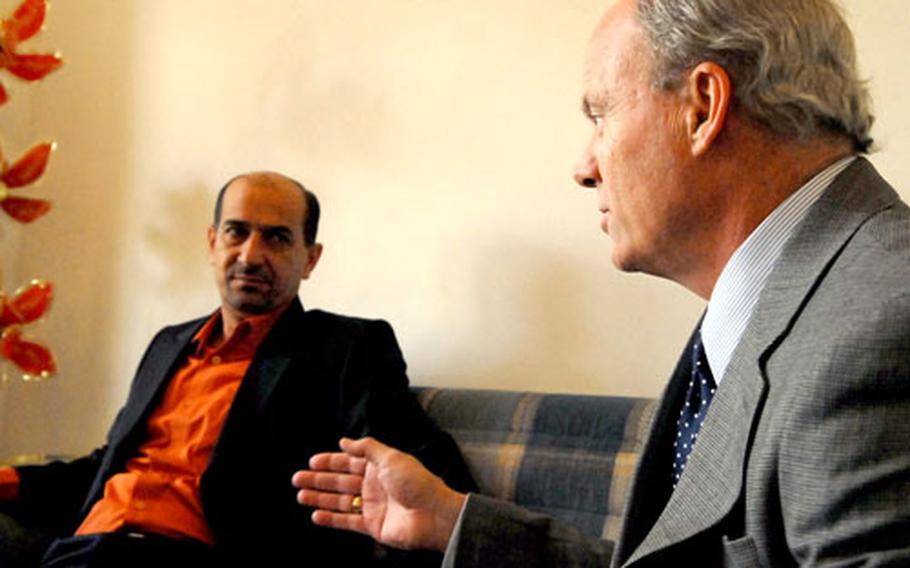 KIRKUK, Iraq &#8212; Dhia Aref is an opinionated, English-speaking Iraqi contractor who can hold his own in a large gathering. He dove right into the dialogue at a meeting last week and often started translating for his fellow businessmen before the Army&#8217;s interpreters had a chance to jump in. Strong-willed as he is, though, Aref didn&#8217;t think much of the Americans&#8217; respectful prodding for the Iraqis to come up with their own solutions. Business is tough here, and he wanted some hands-on help.

"We don&#8217;t need it all in our hands,""said Aref, general director of Dhia Group Co., a company that specializes in road and bridge projects. "We are a new country. We are still growing up."

Aref&#8217;s feelings are understandable. While Iraq&#8217;s security situation has steadily improved, the country&#8217;s entrepreneurs often face overwhelming obstacles when they want to start a business. Soldiers and advisers from the area&#8217;s provincial reconstruction team played host to a meeting last week at the Northern Oil Company&#8217;s guest house to help entrepreneurs overcome those obstacles by introducing them to bankers and others who could help &#8212; while also encouraging them to come up with their own solutions.

They can certainly use the help.

Loans &#8212; costly as they have become in the U.S. &#8212; are many times more expensive here. The central bank&#8217;s official lending rate is 16 percent, but Iraqis pay somewhere between 20 percent and 25 percent, said Blier Mohammad Aziz, the general manager of Hawalka Bank, which offers services around Iraq. By contrast, the government&#8217;s biggest small business loan program offers rates at 2.25 to 4.75 percentage points over the prime rate, depending on the amount and type of loan.

"We have a very big problem with banking in Iraq,"" Aref said. "We need American banks. Without money, we cannot do anything."

Iraqis have an alternative in so-called "Islamic banking,""said Burdin Hickok, the economic section head for the Kirkuk Provincial Reconstruction Team. In this system, banks front the money with low or no interest in exchange for a cut of the profits. The arrangement is closer to venture capitalism than a traditional loan, he said.

The destruction in Iraq has forced the country to depend on imports in the past. Now that the country is recovering, the growing strength of the dinar against other currencies continues to help imports. A stronger dinar lowers the cost of imported goods, making it hard for domestic businesses to compete.

Even when the dinar&#8217;s value eventually stabilizes, Iraqi businesses will still need to look for natural competitive advantages over their foreign competitors if they want to stay profitable, Hickok said. Making petroleum-based products such as plastics, for example, could be feasible because of savings that come from being so close to oil production sites.

Not all Iraqis are content with this situation. Aref complained that Iranian cola factories can sell their beverages cheaper than Iraqis can make them and said that the government needed a tax on imports. Hickok countered that tariffs would only drive up costs for already poor Iraqis.

The wish for help echoed a similar frustration with the hands-off approach the Americans have adopted to encourage Iraqis to take control of their own affairs.

But bureaucratic problems have compounded the economic challenges.

Prospective business owners must navigate through Byzantine procedures to get the correct permits &#8212; a legacy of the centralized economy that Saddam Hussein used to control the country.

Sabah Hussein Alhaag Ali, the general manager for Al-Zab Al-Asfal Co., described frustrations when he couldn&#8217;t get officials in Hawijah to approve a bottled water plant. Adam Smith needs to be a mayor, he said, referring to the 18th- century capitalist visionary.

"We want to invest in Kirkuk, but the government will not allow it," Aziz said.

The irony of the situation is that growing numbers of Iraqis have money that they could be investing back into their country. This hasn&#8217;t happened partly because many have been accustomed to living day to day. They are still adjusting to planning for their future.

Yet Kirkuk&#8217;s booming markets &#8212; where even the youngest children work by selling packs of gum &#8212; show that capitalism is alive and well in the country.

Instead, Ali noted that people have a genuine fear of commercial investment. No one trusts the government and no one trusts each other, he said. And borrowers may be as suspicious as lenders. Aziz noted that his bank has made more than $13 million worth of loans, none of which were in Kirkuk province.

"What are the challenges (that prevented more loans)?" Hickok asked Aziz.

Steep as the challenges are, last week&#8217;s meeting at least gave the businessmen a start on some of the problems. They had a chance to sound out Aziz about banking, and they learned about other loan programs that could help their businesses. Perhaps most surprisingly, they agreed to a future meeting with government officials so they could talk to them about the permitting problems.