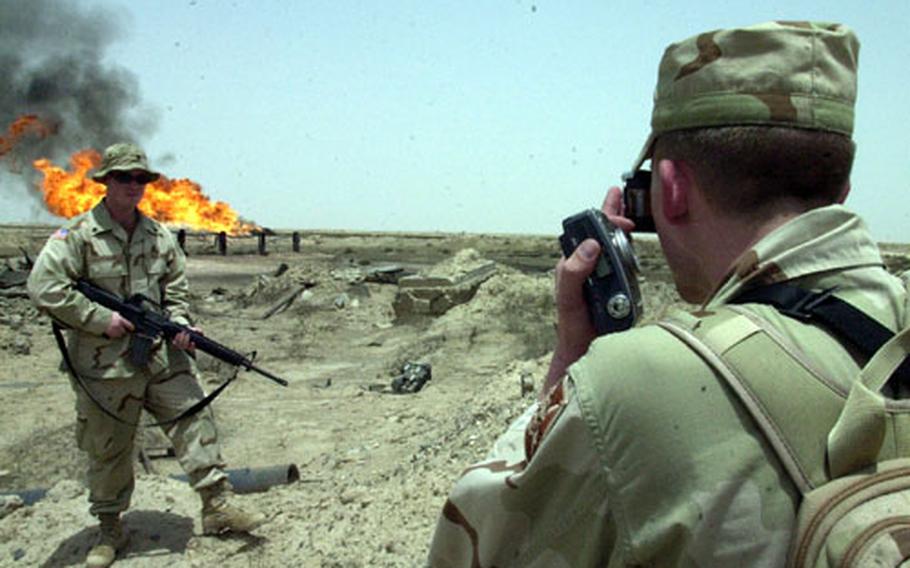 Years from now, photographs from a day out on the Iraqi oil fields will serve as reminders for U.S. troops who toured the demilitarized zone. (Rick Scavetta / S&S)

Years from now, photographs from a day out on the Iraqi oil fields will serve as reminders for U.S. troops who toured the demilitarized zone. (Rick Scavetta / S&S) RUMEILA, Iraq &#8212; When Spc. Damon Mehl visited an oil processing plant just inside the Iraqi border, the 20-year-old Nebraska native was on the hunt for battlefield souvenirs.

As an intelligence analyst, Mehl spent the war cooped up within the Army&#8217;s command center at Camp Doha, Kuwait. The trip to Iraq last week with the U.S. Army Corps of Engineers was the first and only chance for Mehl and a small group of comrades to get off base.

&#8220;I really want to find some books in Arabic, the Quran or something,&#8221; Mehl said, as he hopped across huge oil pipes and ducked into an abandon building.

However, he found only technical manuals, which he decided were best left for the oil workers.

The area around the processing plant that Mehl was touring was spotted with small lakes of black crude bubbling among the sand dunes. Forty-foot flames burned from gas pipes, belching dark gray smoke into the clear sky. It was not a pleasant sight.

&#8220;I just want to go home,&#8221; said Spc. Joshua Cunningham, 20, an imagery analyst from Wills Point, Texas, as he stared out across the environmental nightmare.

Behind Mehl and Cunningham, Spc. Joseph Feagin, 25, an imagery analyst from Charleston, S.C., was just glad to be out of the office. He spent the war watching images collected from unmanned spy planes, such as the Predator.

He was amazed to be roaming around Iraq on his own. Iraqi oil workers called out and waved as the soldiers made an informal inspection of the area.

Thousands of U.S. troops remain locked down at camps in Kuwait. Few ever get off Camp Doha into nearby Kuwait City, let alone have the opportunity to tour the battlefield.

The soldiers, part of the 513th Military Intelligence Brigade from Fort Gordon, Ga., crossed into the demilitarized zone with feelings of apprehension and curiosity.

Burned hulks of Russian-built T-54 tanks and 23 mm anti-aircraft weapons stand out along the featureless desert road. Prongs from Valmara anti-personnel mines are visible from the roadside. Much of the war debris dates to the 1991 Gulf War.

The demilitarized zone and southern Iraq is familiar ground to the intelligence troops, but only from research that went into their reports.

Mehl was obviously excited about the trip, and ready for trading. He carried $200 cash and a massive black rucksack stuffed with candy.

Maybe, he was too excited.

Before crossing the Iraqi border, he had misplaced the money. Later, while trading with British troops, Mehl left his bag of goodies behind.

But he managed to barter with a shop owner for a handful of Iraqi dinar, nearly worthless money with Saddam Hussein&#8217;s portrait. He also traded a New York City police patch for a Welsh cavalry beret.

At a school in Rumeila, a little boy tore out Saddam&#8217;s picture from his textbook, and gave it to Mehl for $1. On the back was love poetry scribbled in Arabic, complete with a tattoo-like drawing of a muscled arm with a heart and flowers.

At the local police station, British troops invited the GIs inside to have a look at a confiscated cache of Iraqi AK-47 rifles.

When his convoy passed back through the oil plant, Mehl recovered his candy bag, which the British soldiers had not raided. Then, as he crossed back into Kuwait, he found his cash &#8212; stuffed inside an ammunition pouch on his flak jacket.

Mehl was happy with his small stash of souvenirs.

But he and the troops really hit the jackpot on the return tip to Kuwait when the convoy stopped at a McDonald&#8217;s near Camp Doha. Mehl bought 10 cheeseburgers to take back behind the high walls and concertina wire.