Iraq cadets get crash course in art of policing 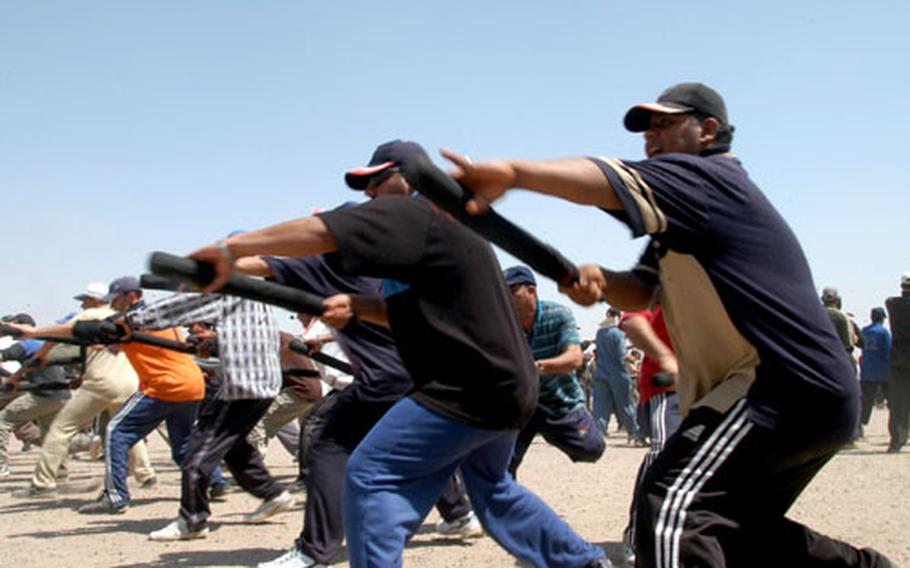 Cadets at the Baghdad Police Academy train to use their batons. The cadets are enrolled in an eight-week training program that teaches them the basics of policing. (Sandra Jontz / S&S)

Cadets at the Baghdad Police Academy train to use their batons. The cadets are enrolled in an eight-week training program that teaches them the basics of policing. (Sandra Jontz / S&S) 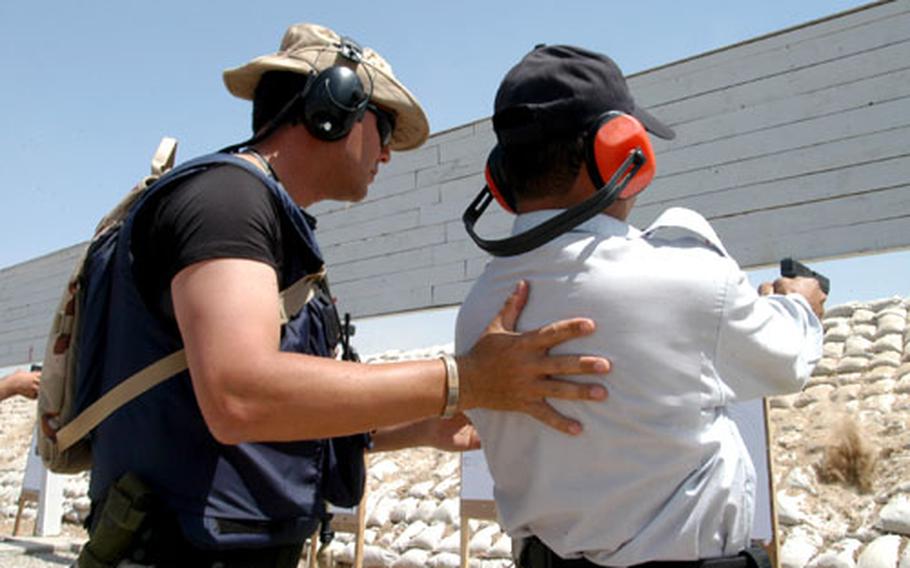 An instructor repositions the arm of an Iraqi police cadet during live-fire training in 2005 at the Baghdad Police Academy. (Sandra Jontz/Stars and Stripes, file)

BAGHDAD &#8212; One day soon, Maj. Gen. Mohammed hopes, the Baghdad Police Academy will return to its illustrious days of turning out the best police leaders in Iraq.

But for now, the dean of the academy said he must be content with overseeing the training of police cadets in an eight-week crash course to fill the rank-and-file of beat cops.

&#8220;The challenges? There are plenty of difficulties, starting with, now we are a training center, not a college,&#8221; said the general. For security reasons, he asked his last name not be used.

The academy, which started in 1944, was the jewel of the Iraqi police force, he said. Officers attended for three years, earning a bachelor of police science degree.

&#8220;This place holds a special place in their hearts,&#8221; said Alexander Hutchison, deputy director of the Baghdad academy. The U.S.-led coalition and Ministry of Interior recognized that, and have approved plans to extend the curriculum, first moving to a six-month program, then nine, then 12, and finally to the full-fledged three-year baccalaureate program it once was.

For now, the sprawling 250- to 300-acre campus in downtown Baghdad focuses on the basics of policing. It is one of five basic police academies in Iraq managed by the Civilian Police Assistance Training Team, or CPATT, which has trained more than 27,000 cadets since October. Training also takes place in Jordan.

Each month, about 3,500 new police officers graduate from the eight-week courses.

The program is about 75 percent hands-on training, from shooting live rounds on the range to techniques of riot control, baton use and disarming a suspect. Courses are taught by current and former civilian police officers and military police.

Soldiers from Sgt. 1st Class James Shuman&#8217;s platoon from the 411th Military Police Company, out of Fort Hood, Texas, for example, have about 1,000 cadets under their tutelage. The cadets are eager to learn and quickly grasp the lessons, Shuman said.

Not all get in. Candidates first must go through a vetting process that starts at their provincial police stations and have letters of recommendation from tribal, spiritual or government leaders.

Then they go through a litany of literacy, psychological and physical tests that include an obstacle course and distance run.

Nearly 4,300 people have taken the courses thus far. A smaller advanced training site is in the north at Irbil.

&#8220;They come here to learn how to do things easier and better, be more efficient and more progressive,&#8221; said Kevin Clayton, 49, bureau chief of Advanced Training.

First Lt. Bashir Abass, 30, is delving into the area of Internal Affairs, those officers tasked with policing their own. Corruption was rampant under the former government, he said. Police did not earn a lot of money and often took bribes.