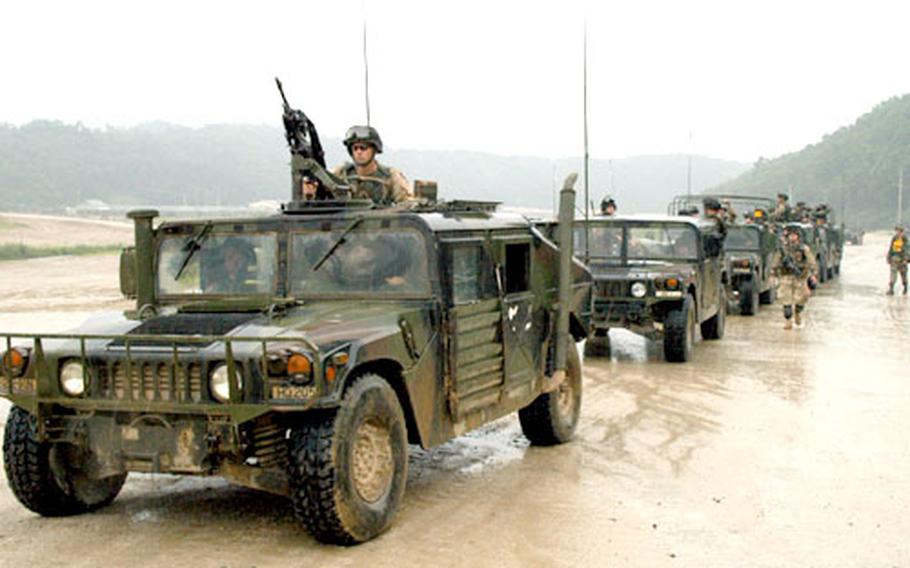 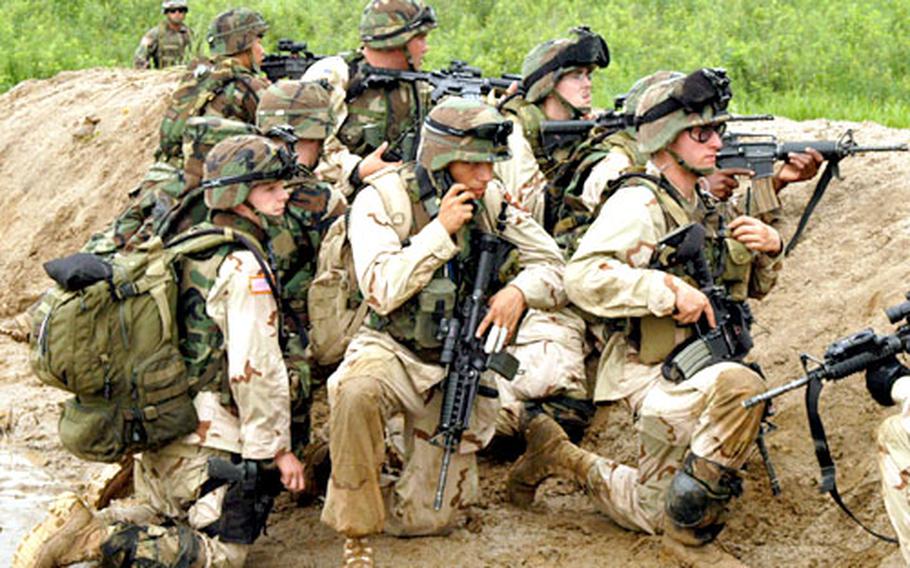 Patton and others were at Rodriguez Range Friday to observe platoons doing combat convoy live-fire exercises that train soldiers to use aggressive tactics in response to any challenge from the enemy.

&#8220;It is all about developing an offensive mind-set. We are treating every mission as a combat operation and every threat along the road as a threat we are going to attack by fire or by maneuver to kill the enemy,&#8221; Patton said.

As part of the convoy training, over the next two weeks, every combat arms platoon in the 2nd Brigade Combat Team will train in tactical movement, reacting to contact and assaulting enemy positions.

The monsoon rains pummeling 2nd ID soldiers at the range have little in common with the stifling heat they can expect in Iraq. But Patton &#8212; who recently returned from a fact-finding mission in the desert in preparation for the mission &#8212; said the terrain at Rodriguez Range used for the convoy training is similar to some of the areas in which his men will operate.

Rodriguez is a large valley full of long grass and dirt tracks.

&#8220;We give them as realistic conditions as we can portray from our future fight in Iraq &#8212; terrain that replicates pretty closely the type of terrain we are going to be fighting on there. You think of Iraq as a big open desert but there are areas that have irrigation ditches and broken terrain that closely resembles what we have in South Korea,&#8221; he said.

During the combat convoy live fire exercise, units are attacked with an improvised explosive device (IED) and snipers.

Six Humvees carrying 43 soldiers moved slowly through the valley while their passengers, carrying loaded weapons, kept a lookout for trouble. Then the action started. A smoke canister exploded ahead of the convoy, signaling an attack by an IED. Large yellow targets appeared, representing enemy vehicles; man-sized targets popped up representing insurgents who were on foot.

When truck gunners had suppressed the enemy, the platoon dismounted and went to a rally point, where they learned that the potential trigger-man for the IED had escaped to the west. The platoon launched a hasty attack to pursue the insurgent, setting up a support-by-fire position that sent a hail of bullets into a cluster of man-sized targets down-range while an assault squad moved off to the west after the bad guy, who was holed up next to a small shed.

Spc. Ryan Nordbrock was laying down support by fire and shot two 30-round magazines down range.

&#8220;We try to make training as realistic as possible, but it will be a whole new level when bullets are going both ways&#8221; in Iraq, he said.

The assault team moved in close under cover of smoke and the support fire. They fired on a pair of pop-up targets representing the insurgents, then stormed the shed.

Shooting the insurgents &#8220;was easy because they were pretty close targets,&#8221; he added.

Another member of the assault team was &#8220;shot&#8221; by the &#8220;enemy&#8221; while clearing the building and had to be evacuated with a simulated sucking chest wound and a splinter in his eye.

Platoon leader 1st Lt. Tony Doan had a lot to think about during the exercise, controlling his men and vehicles and responding to the attacks. Doan said the nine months he has spent as platoon leader in South Korea have given him time to get used to the job.

The combat convoy training is giving soldiers confidence in their buddies, their teams and their equipment, Patton said.